Climate change is altering the natural disturbance regimes to which Connecticut forests are adapted. Learn about current and expected changes in the following areas: 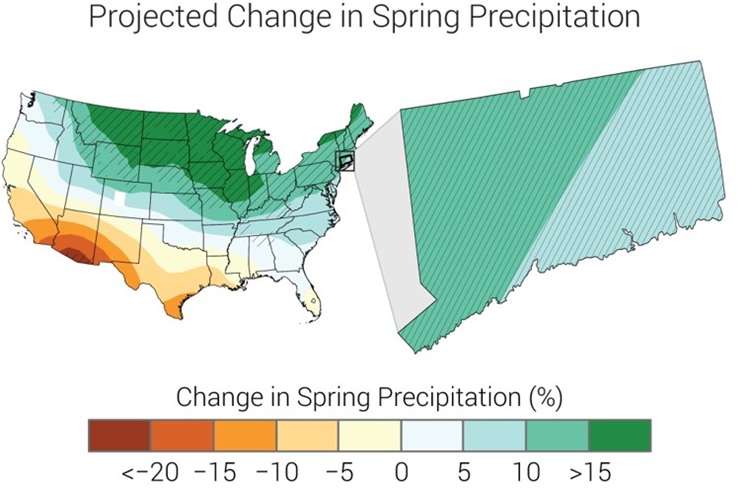 Climate model projections of changes in spring precipitation (%) by the middle of the 21st century relative to the late 20th century under a high emissions scenario. Hatching represents areas where the majority of climate models indicate a statistically significant change. So, the entirety of Connecticut is expected to undergo a significant increase in spring precipitation by mid-century. Source: NOAA State Summaries 2019

Annual average precipitation is projected to increase, with increase most likely occurring the spring and winter, during the dormant season. Connecticut will experience an increase in both total precipitation and in the number of extreme precipitation events. Heavy rainfall events increase the risk of soil erosion, nutrient deposition, and the spreading of contaminants and pathogens.

Extreme precipitation events and wind- and pressure-driven storm surges can result in flooding, especially in coastal communities when these events occur in conjunction with high tides (Frumhoff et al., 2007, Runkle et al. 2017). Flood disturbance influences forest health, species diversity, and regeneration. These events may occur more frequently and may be larger in duration and extent, leading to a greater overall effect on the forested ecosystem. 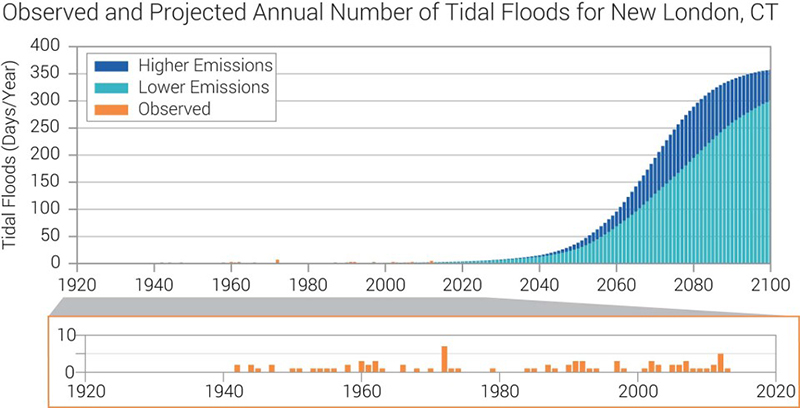 Sea level rise has caused an increase in tidal floods associated with precipitation that exceeds local thresholds of water levels. As sea level has risen along Connecticut's coast, the number of tidal flood days has also increased. Here, you can see that the most recent decade had the greatest number (18) of floods of any 10-year period. Data from New London is being used as a metric for all of Connecticut's coastal and flood plain areas. Source: NOAA State Summaries, 2019

Temperatures in Connecticut have increased over 3°F since the beginning of the 20th century. Forest productivity is changing as a result of our warming climate. With warmer temperatures lasting longer, our plants have a longer growing season and more time to photosynthesize. This can lead to enhanced forest growth and carbon sequestration. However, plant respiration also increases with increasing temperatures (Sendall et al. 2015). It is therefore possible that increases in growth and productivity are offset by increases in respiration. 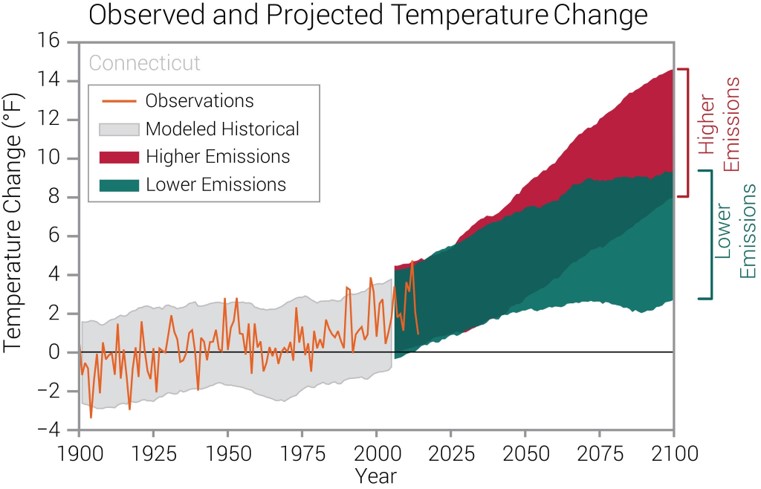 Observed and projected temperature changes (compared to the 1901-1960 average) in Connecticut's air temperature. Projected changes for 2006–2100 are from global climate models for two possible futures: one in which greenhouse gas emissions continue to increase (higher emissions) and another in which greenhouse gas emissions increase at a slower rate (lower emissions). Temperatures in Connecticut are depicted by the orange line. Shading indicates the range of annual temperatures from the set of models. Unprecedented warming is projected to continue through the 21st century. Less warming is expected under a lower emissions future (the coldest years being about 3°F warmer than the long-term average; green shading) and more warming under a higher emissions future (the hottest years being about 10°F warmer than the hottest year in the historical record; red shading). Source: NOAA State Summaries, 2019

Although annual precipitation is increasing, the number of consecutive days without precipitation will also increase. Droughts are among the greatest stressors on forest ecosystems, and often lead to secondary effects like insect and disease outbreaks, and increased fire risk. Droughts are playing a greater role shaping Connecticut’s forested landscape, occurring more frequently with greater extent and duration.

The effects of drought on forests depend on many factors, including the duration and severity of the drought and site-level characteristics of the forest. Forests with dense tree cover are more susceptible to moisture stress because the trees must compete for water (D’Amato et al. 2011, Magruder et al. 2012). Tree species also respond differently to drought, as some species are more tolerant than others.

Connecticut’s longest drought on record lasted 46 weeks beginning in June 2016 and ending in May 2017. The peak of this drought affected 44.5% of Connecticut land. Visit the U.S. Drought Monitor to track droughts in Connecticut. 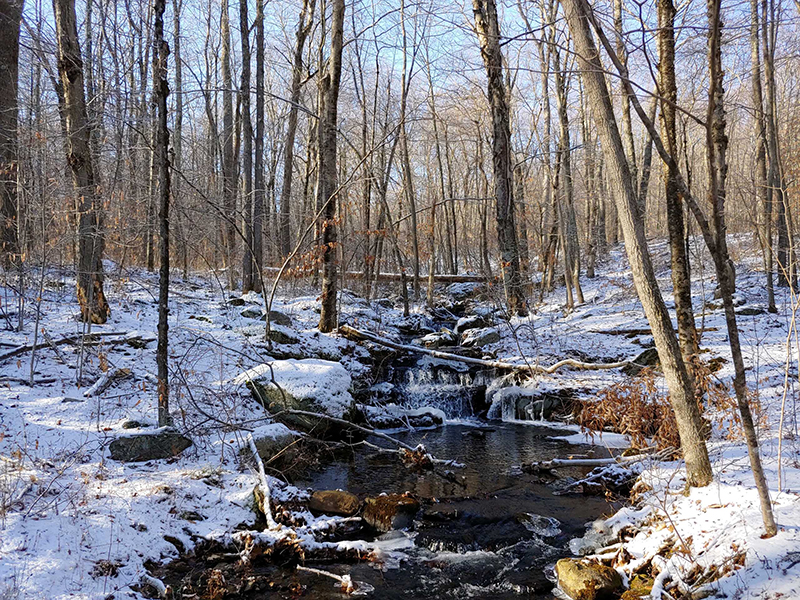 Light snow cover in a Connecticut forest. Across New England, the average number of days with snow on the ground in winter months is projected to decrease by as much as 5.2 days per month by the end of the century (Rustad et al. 2012, Janowiak et al. 2018). Photo Credit: Nathan Piche, CT DEEP Forestry

Rising global air temperatures have seasonal effects. Air temperatures are increasing most in the winter, which contributes to a decrease in snowfall and snow pack. In fact, recent IPCC projections indicate that if we maintain business as usual carbon emissions, Nutmeggers will have to travel to the deep Maine woods, Adirondacks, Green Mountains, or White Mountains to enjoy snow cover before or by 2099. 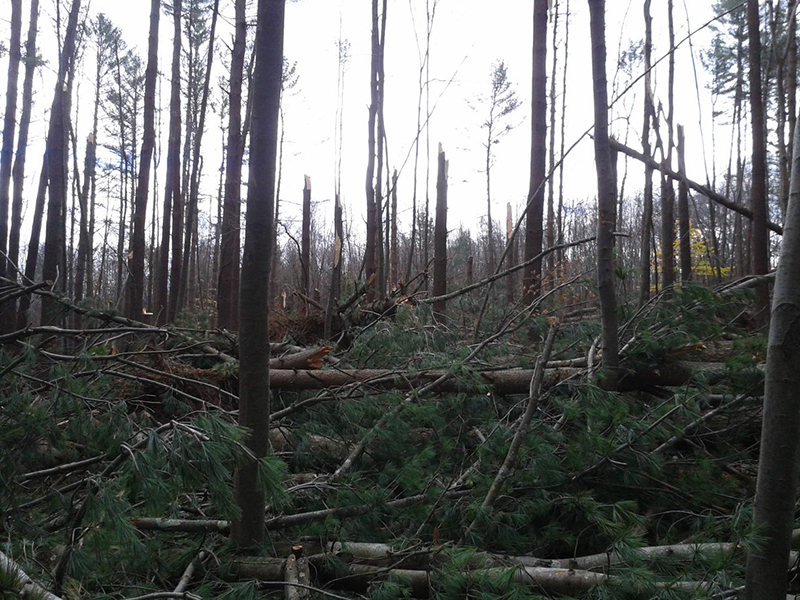 Wind events range from small microbursts to extreme weather events, like hurricanes and tornadoes. Connecticut forests are adapted to these events, however climate change is increasing their intensity and frequency. This has varied effects on a forest, which are largely dependent upon its species composition and structure (size and arrangement of trees). For example, young trees are generally more flexible and less likely to break in a windstorm than older trees, which can more easily snap or be uprooted in high winds.

These pre-disturbance conditions also influence the rate and composition of regrowth and vegetative development following the disturbance, which impacts future species composition and biomass accumulation.

Ice storms are a common disturbance in Connecticut forests, and are becoming more common in our warming climate. Ice formation most often occurs when a winter warm front passes over much colder air. As rain falls from the warm layer through the cold layer, it becomes supercooled and able to freeze onto any surface it encounters. Resulting impacts range from minor twig damage to major crown damage. Hardwoods, which comprise the majority of Connecticut forests, are more susceptible to ice storm damage than softwoods. This damage makes trees vulnerable to pests and pathogens, and decreases growth as trees are forced to allocate more resources to closing wounds and other protective measures. Reductions in leaves and branches also limit photosynthesis and carbon sequestration capacity.

Invasive plants are already a major issue threatening Connecticut forest health, and it is likely that they will disproportionately benefit under changing climatic conditions. This is because of their broad environmental tolerances, extended leaf phenology, more effective exploitation of changed environments, and more aggressive colonization of new areas. The climatic factors that influence invasive plants' ability to invade include warmer temperatures, earlier springs, and reduced snowpack. 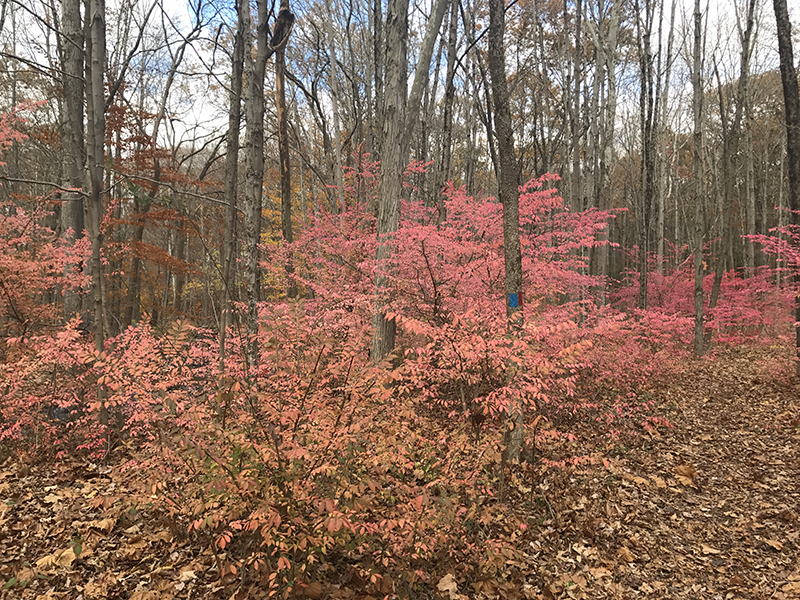 With growing conditions changing, it is likely that the range of many invasives common to the U.S. Southeast (e.g., kudzu) will expand into Connecticut. For more information about invasive species in Connecticut, visit the Connecticut Invasive Plant Working Group’s website.

The spread and abundance of invasive plants is also exacerbated by natural disturbances. For example, Japanese knotweed populations in Connecticut increased following tropical storm Irene and hurricane Sandy in 2011 and 2012, respectively. 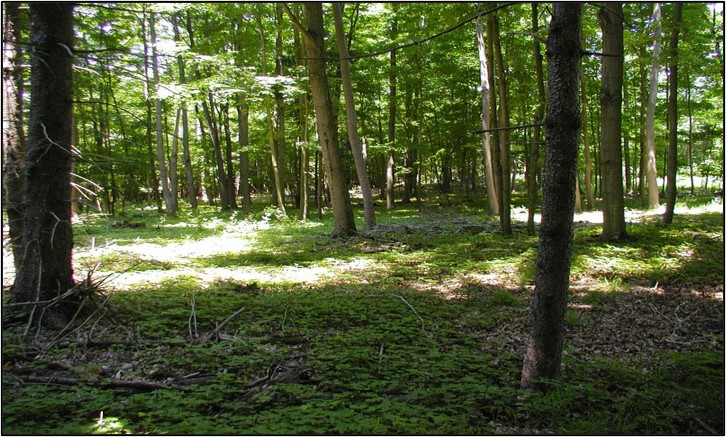 The white-tailed deer is the most significant herbivore in Connecticut forests. Herbivory can stunt forest development. Climate change alters deer populations and behavior. Decreased snowpack increases access to forage during winter months, and deer browsing pressure may limit forests’ ability to adapt to climate change by preventing or reducing establishments of migrating species.

Changes in Local and Regional Economies: 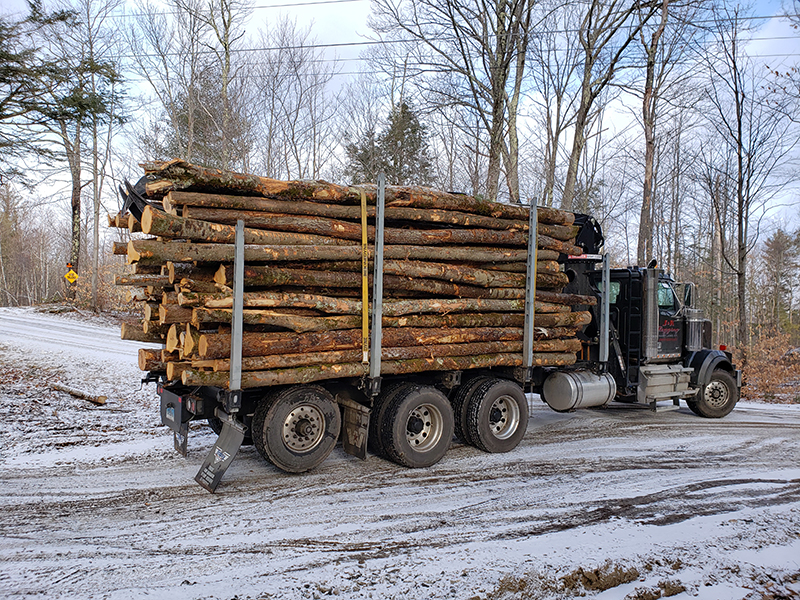 In comparison to the 1980s, average temperature in Connecticut is 3 degrees F higher in winter when most logging is conducted. This reduces opportunity to harvest, which poses challenges for mills and operators. Warming temperatures and lack of snow cover impact sugar maple health, affecting the maple products industry. Climate change also affects winter sport recreation, tourism, and other important local economies.