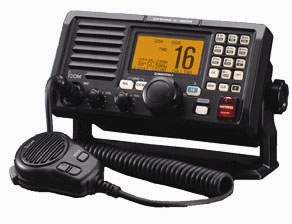 What is a "Marine VHF Radio"?

Although not required in recreational boats under 65.5 feet long, a Very High Frequency (VHF) Marine Radio allows instant communication between your boat and other boats, marinas, bridges, and the United States Coast Guard (USCG). It is the primary means of communication on coastal waters and has many characteristics which make it preferable to a cell phone, CB Radio, or other means of communication. Most VHF Marine Radios also have instant access to NOAA weather forecasts, 24 hours a day.

Do I need a license?

If you are a recreational boater traveling within the United States, you do not need a license for a VHF Marine Radio.

If I have a radio do I have to listen to it all the time?

If you have the radio on, you must maintain a watch on VHF Channel 16. In USCG District I waters (northern New Jersey to Canada), urgent marine information broadcasts, such as storm warnings, are announced on Channel 16.

(NOTE: These instructions are based on USCG District 1 in which Channel 9 is the designated hailing channel.)

How do I operate it?

Which channels should I use?

The standard procedure for a non-emergency call such as calling another vessel, marina, or restaurant to ask where to tie up for dinner, is as follows:

An Example of a Non-Emergency Call

You would then switch to Channel 68 and call Lobster Cage Marina using the same procedure and conduct your business. All conversations whether on a hailing channel or a working channel should be kept short and to the point.

"MAYDAY" is to be used ONLY in an emergency in which the boat and/or persons on board are in imminent danger of sinking or major injury or death. You may only have seconds to send a distress call. Here’s what you do. Transmit in this order:

Stay by the radio if possible. Even after the message has been received, the USCG can find you more quickly if you can transmit a signal on which a rescue boat or aircraft can home in on.

An Example of a Mayday Call

Cellular phones may not be as effective as a VHF Marine Radio under certain circumstances.

All new radios, and some older ones, have DSC capability. DSC radios are VHF radios, but they have an added benefit of sending an automatic DISTRESS alert (on Channel 70) to the USCG and other nearby DSC and VHF equipped vessels when activated. (Read your manual for specific features of your model.) To take full advantage of the DSC, be sure to obtain a free nine-digit Maritime Mobile Service Identity (MMSI) number and have it programmed into the unit before you transmit. You may obtain a free MMSI by contacting Boat US, SeaTow or the US Power Squadrons. Newer DSC capable radios also allow non-emergency facilitated boat to boat communications.

What do you do if you hear a distress call?

If you hear a distress message from a vessel and it is not answered, then you must answer. If you are reasonably sure that the distressed vessel is not in your vicinity, you should wait a short time for others to acknowledge.

How do I know if there are storm warnings?

How do I know if my radio is transmitting?

You can request a radio check. Do so on Channel 9 or another working channel. Not on Channel 16.

Turn your radio on and listen for a while to hear how other people use it.