Attainment Demonstrations for the 2008 Ozone NAAQS

Attainment demonstrations are required by the Clean Air Act (CAA) for areas classified as moderate nonattainment or above. While both areas were originally designated as marginal nonattainment based on monitored ozone levels, these designations underestimated the significant persistence of the ozone problem and the areas were unable to attain the standard by the marginal deadline and were thereby reclassified by the EPA to moderate on June 3, 2016, and again reclassified to serious nonattainment on August 23, 2019. 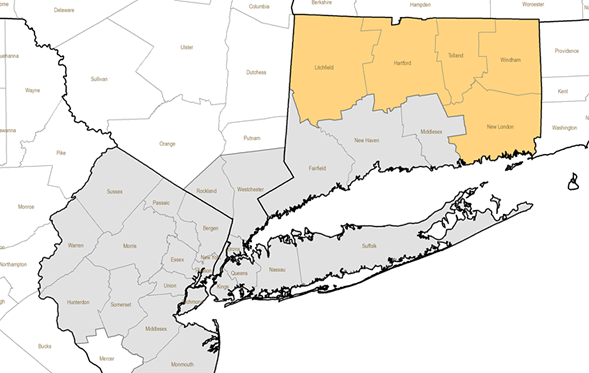 Statewide SIP Revisions for the Redesignation to Serious Nonattainment

This revision builds on the earlier SIPs below to fulfill the requirements for the reclassifications to serious nonattainment. Consideration is given for Greater Connecticut's Clean Data Determination, on July 13, 2020, indicating attainment of the standards in that area.
Final Submission, June 23, 2022
Comments on October 2021 Proposed SIP:
Proposal:

This revision addresses the Connecticut portion of the New York-N. New Jersey-Long Island, NY-NJ-CT Nonattainment area (Southwest Connecticut: Fairfield, New Haven and Middlesex Counties). Specifically, DEEP is submitting the following to meet the requirement of an Attainment Demonstration under the moderate classification for the 2008 ozone standard and to address the 1997 ozone standard State Implementation Plan (SIP) call. The plan demonstrates that Connecticut has addressed the requirements as outlined under the Clean Air Act (CAA) for an area such as Southwest Connecticut. However, it also demonstrates that Connecticut is overwhelmingly impacted by out of state emissions. In fact, the worst observed air quality in Connecticut is 95% due to emissions other than Connecticut's sources. Therefore, the problem of ozone in Southwest Connecticut is only solvable if upwind states fully address their obligations under the Good Neighbor provisions of the CAA, which to date, they have failed to do so.
Final Submission, August 8, 2017 :
Public Hearing will be held July 25, 2017. All written comments must be received by July 25, 2017. See the Notice below for more details.

On January 17, 2017 DEEP submitted the the clean air plan, to demonstrate how Greater Connecticut will come into compliance with the 2008 national air quality standard for ozone, to the Environmental Protection Agency. This plan was developed to meet the requirements set out in the federal Clean Air Act, including a commitment to further reducing air pollution in Connecticut and adopting Motor Vehicle Emissions Budgets. All documents are in PDF format unless otherwise indicated.
Final Submission, January 17, 2017 :