Mobile sources in Connecticut typically burn gasoline or diesel fuel, but new vehicle technologies allow vehicles to operate with zero or low emissions by utilizing electricity or renewable fuels to power the vehicle.

Why are fuels regulated?

In 2016, fuel burning mobile sources were responsible for 38% of greenhouse gas emissions, 66% of nitrogen oxide (NOx) emissions, and were a significant contributor to particulate matter (PM) pollution in CT. Pollutants from fuel emissions such as NOx and PM are linked to the formation of ozone and smog, as well as various health issues. Because of this, fuels are regulated at both the Federal and State level.

Under the Clean Air Act, the EPA has the authority to set national fuel emissions standards, fuel economy requirements for vehicles, and various other requirements for fuel, such as additives. Through regulation, the impact of fuel-burning emissions on air quality both in Connecticut and nationally can be minimized!

What types of fuels do mobile sources use?

Gasoline is the most prevalent fuel used in mobile sources and these sources emit toxic pollution that causes causes ground level ozone or “smog”. Smog threatens the health of millions of Americans each year, and is particularly dangerous to children and individuals with respiratory problems. As a result of EPA’s regulatory programs and various state regulations, gasoline sold today in the U.S. is far cleaner than gasoline produced in previous decades.

Reformulated gasoline is gasoline blended to burn more cleanly than conventional gasoline and to reduce smog-forming and toxic pollutants in the air we breathe. The RFG program was mandated by Congress in the 1990 Clean Air Act amendments. The first phase of the RFG program began in 1995 and the second (current) phase began in 2000.

About 30 percent of gasoline sold in the U.S. is reformulated.

Diesel fuel can be used to power highway vehicles such as trucks and passenger cars, as well as non road equipment such locomotives and ships. Federal diesel fuel standards have reduced harmful emissions from diesel fuel used in transportation, but there are oprtunities for more reductions.

Ultra-Low Sulfur Diesel (ULSD) fuel is a cleaner burning fuel that contains a maximum 15 parts-per-million (ppm) sulfur. As of 2010, all highway diesel vehicles must be ULSD. As of 2014, most nonroad diesel vehicles and equipment must use ULSD.

Low sulfur diesel fuel contains a maximum of 500 ppm sulfur. As of 2014, this fuel has been almost completely phased out for ULSD fuel, with limited exceptions for older locomotive and marine engines.

Some vehicles are designed to use renewable or alternative fuels. Alternative fuels are non-conventional fuels such as biodiesel, natural gas, propane, or hydrogen. Renewable fuels, such as biofuels, are fuels that are produced from renewable processes.

The EPA operates the Renewable Fuel Standard (RFS) Program that regulates renewable fuels. The RFS program was authorized under the Energy Policy Act of 2005 and the Energy Independence and Security Act of 2007.

How are gasoline vehicles refueled?

Gasoline vapors that escape during the transfer of gasoline to underground storage tanks and the refueling of motor vehicles pose a risk to public health and the environment. In order to protect public health and the environment, three different types of vapor control systems have been or are being used to minimize vapor emissions during the transfer of gasoline at gasoline dispensing facilities (GDF). The three types of systems are: Stage I, Stage II, and Onboard Refueling Vapor Recovery (ORVR).

Learn more about these three systems on our Gasoline Dispensing Facilities webpage. 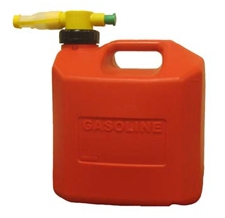 Old fashioned plastic gasoline containers evaporate volatile organic compounds (VOCs) that produce smog, reduce our air quality and can be directly harmful to your family. Gas spills may even find their way into the ground and contaminate the water table.

New, spill-proof containers have an automatic shut off feature to prevent overfilling and remain sealed when not dispensing fuel. Plus, they’re made of a material that prevents gas vapors from escaping. New gas cans reduce harmful emissions by up to 75%!

Benefits of swapping out your old gasoline containers:

What is Fuel Economy? 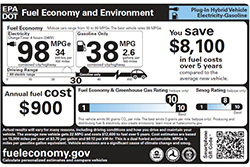