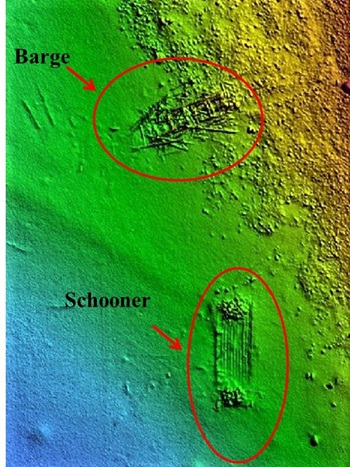 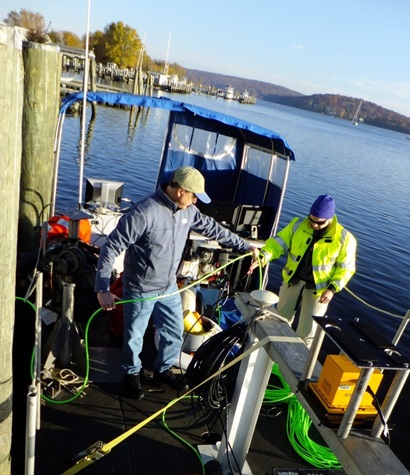 As part of efforts to assess the effects of Superstorm Sandy, and any future similar storms, on submerged archaeological sites in coastal Connecticut, and to provide baseline data for management of the state’s historic shipwreck sites, R. Christopher Goodwin & Associates, Inc. (RCG&A), with support from the University of Rhode Island’s Graduate School of Oceanography (RIGSO) and Ocean Survey, Inc. (OSI), conducted a series of geophysical remote sensing surveys in Connecticut waters for the SHPO. Surveyors used oceanographic remote sensing technologies, including side scan (interferometric) sonar, other instruments, and specialized computer software to collect, process, and interpret data on survey areas in waters near Stamford, Bridgeport, Old Saybrook, and New London, as well as in reaches of the Connecticut River below Essex.

The team’s high-resolution remote sensing array equipment makes diving unnecessary, in that the instruments can locate and even render images of shipwrecks on water bottoms. Cesium magnetometers are able to detect ferrous (iron-containing) objects, and even primarily wooden shipwrecks with ferrous parts such as fasteners. Multi-beam echo-sounders (MBES), or sounding systems, resolve the true geometric shape of a target in three dimensions at centimeter accuracy. Unlike other sonar, the beam-forming capability of the MBES provides a high level of detail about the target and its surrounding environment. 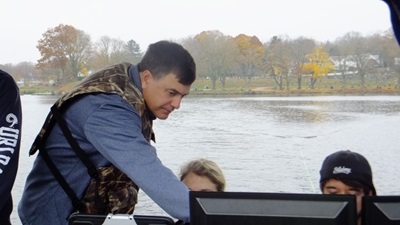 After initial surveys, RCG&A obtained close-order, high-resolution multi-beam imagery on 17 historic shipwrecks of the 25 that were recorded. Those sites consisted of sunken vessels dating from the early nineteenth to mid-twentieth centuries. They included three canal-type barges in Bridgeport Harbor previously listed in the National Register of Historic Places; the previously known but undocumented wreck of Thames off of Flat Neck/Stamford; and 13 shipwrecks that had not been documented previously, including two schooners, two sidewheel steamships, and seven barges.

Six of the barges were located in a “barge graveyard” off New London in the vicinity of Fishers Island. One of the steamships was the vessel Isabel, a rare example of a well-preserved sidewheeler with a mostly intact nineteenth century walking beam engine specifically designed for American coastal and inland waters. Isabel was recommended eligible for listing in the NRHP. 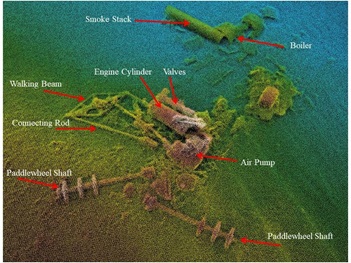 Another site researched during the survey was an area of the Connecticut River in which 27 American ships captured and burned by the British during the War of 1812 may have sunk. The research team began surveying within Essex Harbor, then went out into the river. Steve Schmidt, RCG&A’s Senior Nautical Archaeologist, noting the difficulty of search, suggested in a newspaper article about the survey that “some of those vessels burned by the British may be buried under sediments” and would only be detectable with the remote sensing equipment if metal parts were still present and had not been salvaged at the time (Judy Benson, “Marine archaeologists search Connecticut River for historic artifacts,” The Day, November 27, 2015).

RCG&A’s team found no trace of the 27 vessels, but did locate 25 other shipwrecks. Of these, 17 were historic and are discussed in the final report on the underwater archaeology survey. The barges sunk in Fishers Island Sound appear to date to the late nineteenth to early twentieth centuries. RCG&A was unable to determine the identity of the latter six wrecks, but given that they lie close to one another and appear to be of the same vintage, it seems likely that they were purposefully sunk when they became obsolete.

The submerged cultural resources GIS contains identifying and geospatial data on 450 shipwreck sites. The GIS contains a separate layer of 630 wrecks and obstructions recorded by NOAA, and it depicts the 49 survey areas completed by RCG&A as part of this project. Researchers from RCG&A developed the database by compiling information about shipwrecks in Connecticut waters recorded by Heritage Consultants LLC, the U.S. Coast Guard, NOAA, and the National Imagery and Mapping Agency. Other sources were also consulted, including primary historical documents, ship directories, and a range of secondary literature. For each shipwreck listed by one source, the other sources were cross-checked both to obtain further information and to be sure that the same wreck was not listed more than once in the GIS database.

Once the database was populated with each shipwreck’s historical and geographic information, a GIS map was created, plotting the locations of more than 600 wreck sites. The GIS map and underlying database are available to qualified researchers at the SHPO’s office. The comprehensive database will help the SHPO manage those resources and to measure and assess changes over time and following future large-scale storm events.

In addition to the survey and GIS database, the grant funded a management plan for submerged sites in Connecticut waters that provides guidelines for conducting archaeological investigations. The guide contains a survey of other coastal states’, and federal agencies’, marine archaeology programs, laws, or guidelines, as well as reviews of procedures and equipment, including remote sensing devices. In particular, the guidelines for conducting archaeological investigations in Connecticut’s waters recommended, due to Long Island Sound’s murky waters, efficiency of effort, and quality of resultant data, the use of a cutting-edge remote sensing instrument called a multibeam echo sounder. That tool allows the user to create highly accurate, georeferenced three-dimensional images of shipwrecks from the water’s surface, thereby forgoing, in many or most cases, diving to identify or map shipwrecks manually.