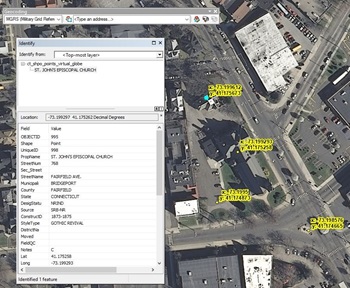 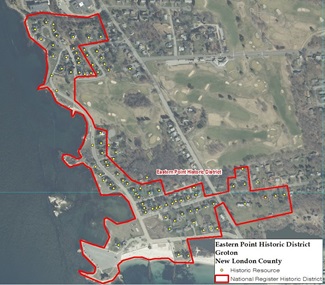 Superstorm Sandy highlighted the need for an electronic database of designated historic resources, in part to avoid the time-consuming searches of paper records that can delay responses to requests for determinations of eligibility. (The SHPO received more than 2,000 requests from FEMA after Sandy.) Under the Hurricane Sandy program, the R. Christopher Goodwin & Associates, Inc. (RCG&A) team created GIS databases for buildings and structures, dams, terrestrial archaeological sites, underwater archaeological sites, and cemeteries.

The searchable database includes 45,288 historic buildings, structures, and districts recorded in the four coastal counties of Connecticut. The database was created by scanning the SHPO’s 45,000-plus paper records and saving the resulting images as pdf-formatted digital files. In turn, the pdfs had to be manually linked to their corresponding entries in a Microsoft Excel spreadsheet.

The buildings database contains information on each property, including its name, address, construction date, architectural style, and designation status—e.g., whether it contributes to a local historic district, is listed on the State or National Register of Historic Places, or has a determination of eligibility (DOE) for the State or National Register but is not yet formally designated. As described above, links are built in between database entries and the scanned forms detailing the National Register, State Register, or locally listed properties.

This searchable geospatial database gives the SHPO and its constituents rapid access to data on all recorded historic resources in Connecticut’s coastal counties when hurricanes or other disasters strike. The database is critical in proactively integrating cultural resources information into current local plans and for prioritizing supplemental surveys in hazard zones.

This searchable database gives the SHPO rapid access to data on all recorded historic resources in Connecticut’s coastal counties when hurricanes or other disasters strike. The database also will help the SHPO to plan more effectively for future preservation efforts and to prioritize supplemental surveys in hazard zones.

GIS layers (geospatial data that exists in layers tied to a digital map) were created for National Register, State Register, and Local Historic Districts as well as individual properties for the four coastal counties in Connecticut. Historic property addresses were geocoded and joined with existing databases created by the Connecticut Department of Transportation and the National Register of Historic Places to create a geographic information database that is viewable in Google Earth and other GIS programs.

Existing data in KML (that is, digital globe files, as, for example, Google Earth uses) or shapefile format (used by GIS programs) were compared to individual property or historic district boundaries depicted in scanned maps included with nomination forms. In addition, parcel data, imagery, and historic structure geocoded points were used to provide a secondary form of comparison. When discrepancies were noted between the boundaries of individual properties or districts, the geospatial data layer was edited to reflect the intent of the nomination. This process identified locations where boundary lines were uncertain and required additional research on the ground (“ground truthing”) for confirmation.

Finally, a geospatial data layer was created for State Register-listed historic districts, allowing users to find information about a district by clicking in that area of the map. That action pulls information about the historic district from the GIS layer beneath the map, based on linked database information. Where the boundaries followed parcels, cadastral data (real estate parcels) were used to draw accurate boundaries. Imagery and historic structures’ geocoded points also were used to refine boundary placement.

Since these data were saved in KML format, researchers are able to view and use the corrected boundaries of coastal Connecticut’s historic districts on desktop computers.

The SHPO’s submerged cultural resources GIS contains identifying and geospatial data on 450 shipwreck sites. The GIS contains a separate layer of 630 wrecks and obstructions recorded by NOAA, and it depicts the 49 survey areas completed by RCG&A as part of this project.

Owing to the sensitive nature of underwater archaeological sites, only SHPO staff and approved researchers have the ability to search the archaeological database.

A survey of 855 dams resulted in an electronic database for use by the SHPO. As part of this effort, a GIS was created that links the dam survey forms and photographic documentation in a format designed for future use, including updating as additional surveys are completed.

GIS database of the Hale Collection of Cemetery Inscriptions

A GIS and database of cemeteries documented in the Charles R. Hale Collection of Connecticut Cemetery Inscriptions was built to assist in future project planning and in the review of project applications by the SHPO. This database will also assist researchers from outside the SHPO in locating the 1,380 cemeteries recorded by Hale in the four coastal counties. (Created in the 1930s, the Hale Collection is the longstanding standard reference in this research area.)

For the GIS and database, contemporary satellite imagery to the locations described by Hale was applied. Each site is identified and geo-located by a point at its approximate center. Each data point within the GIS includes the name of the cemetery, a brief description of its location as noted in Hale Collection documentation, and volume and page references to the associated Hale Collection survey records.