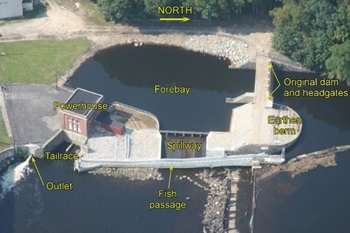 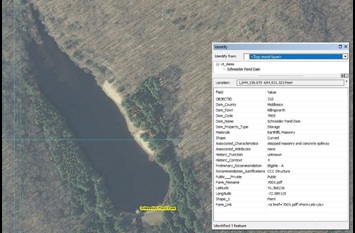 Survey of dams in coastal Connecticut

R. Christopher Goodwin & Associate, Inc. (RCGA) surveyed 855 dams in the four coastal counties. At the outset of the project, surveyors obtained data from the Connecticut Department of Energy & Environmental Protection (DEEP) on 2,558 dams in the four coastal counties. Initially, RCGA surveyors traveled to and examined 501 publicly owned dams in the coastal counties. Approximately 80 percent of those dams (392) were located and inventoried, leading to the second phase of the survey, which was to locate and document privately owned structures. An additional 466 private dams were surveyed once permission had been obtained from owners or once it was determined that a dam could be viewed from a public right of way.

The survey was conducted using smartphones equipped with high-resolution cameras and the Fulcrum app, which is a secure cloud-based way of storing data. RCG&A designed a mobile form for use within the app, which held the recorded attributes of each dam, including GPS location, architectural, and historic information, as well as other data. The app also allowed the dam to be positioned, once its GPS coordinates had been established, on a Google aerial or satellite map.

The results of the inventory were compiled in an electronic database for use by the SHPO. As part of this effort, a GIS was created that links 855 dam survey forms and photographic documentation in a format designed for future use, including updating as additional surveys are completed.

This research has provided the SHPO with an important tool for identifying and evaluating dams in the state and a user-friendly platform for the management of geospatial data on Connecticut’s historic dams. The survey was closely linked to disaster relief and emergency preparation: After Hurricane Sandy, several dams in the state were removed, such as Hyde Pond dam in Mystic, the Pond Lily dam in New Haven, and the White Rock dam on the Connecticut-Rhode Island border. Outdated dams in some cases were unnecessarily impeding water from storm-swollen creeks and rivers or had been structurally compromised in the storm. In either case, their presence created flood dangers for surrounding communities. The linked map and database of dams helps the SHPO make rapid determinations about disaster-struck dams like these.