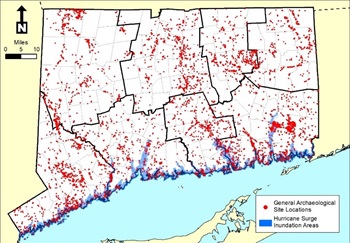 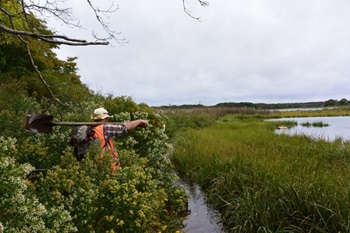 Survey and testing of select areas along the Connecticut coastline focused on archaeological sites within the NOAA-defined Hurricane Surge Zone. Hurricane Sandy, as well as previous storms, exposed sites in prominent areas such as Bluff Point State Park in Groton and in sheltered areas along the margins of the state’s estuaries.

RCG&A’s review of sites recorded in coastal Connecticut found that sites occupied during the Late Archaic Period were significantly more common than expected. Many of these sites are highly susceptible to the threat of coastal erosion

RCG&A archaeologists identified or reexamined thirty archaeological sites in areas vulnerable to severe coastal storms (sixteen new and fourteen previously known). Many of these sites, including some on sheltered bays, already had been affected by erosion from wave action. Wave-driven erosion has affected, among others, sites at Bluff Point in Groton and archaeological sites at the Barn Island Wildlife Management Area in Stonington, facing Long Island Sound.

Prior to fieldwork, RCG&A archaeologists reviewed more than 1,000 sites recorded by the State Office of Archaeology in coastal Connecticut. They found that sites occupied during the Late Archaic Period (approximately 5,500 to 8,000 years ago) were significantly more common than expected, validating long-held but heretofore untested suspicions of archaeologists in Connecticut. Many of these sites are on or are near the shoreline, making them highly susceptible to threats from coastal erosion.

After the review, archaeologists surveyed ten areas along the coast to check for undiscovered sites and confirm the locations of previously documented ones. RCG&A surveyed thirty sites in the ten coastal locations, and compiled information about the existence, location, or condition of thirty-four additional sites. At the thirty surveyed sites, archaeologists determined to what degree they were intact and whether limited excavations—what archaeologists call “testing”—might reveal enough information to assess whether they should be nominated to the State Register of Historic Places or National Register of Historic Places.

RCG&A also conducted limited excavations at seven surveyed sites to determine whether they were eligible for listing in the National Register. Testing at several Late Archaic Period sites uncovered stone chips left from the manufacturing of tools, along with arrow or spear points. Researchers collected sufficient information from the tested sites to recommend one for inclusion in the National Register of Historic Places. Results from archaeological testing at this large prehistoric site demonstrated that portions of it dated from the Late Archaic through the Late Woodland Periods (350 to 1,000 years ago). The excavations revealed a filled-in pit with a partially preserved ceramic pot that dated from the Early Woodland Period (about 2,500 to 3,700 years ago). Radiocarbon dates from charcoal found with the ceramics and from burned material stuck to a pot sherd showed that the hearth fire burned about 4,000 years ago. Laboratory-conducted tests of food residue found on the sherds determined that the pot had been used to cook plants, including seeds.

RCG&A developed planning tools—namely, GIS maps linked to a database and scanned site records—for the SHPO. These extended the utility of the SHPO’s new databases of built resources to the archaeological sites in Connecticut’s four coastal counties. The database was compiled from paper forms stored at both the Office of the State Archaeologist (OSA) in Storrs, and the SHPO in Hartford. Both these offices’ records were checked by the RCG&A archaeological team to make certain that all site records were scanned, and that the SHPO’s files were complete. The OSA’s files contained slightly more than 2,000 records, while the SHPO files held approximately 3,300 archaeological site forms. When the two record sets were put together after scanning and conducting quality-control procedures (eliminating duplicate records, incomplete site records, or records with other critical problems), the database contained about 3,500 unique site records.

Owing to the sensitive nature of some types of historic resources like archaeological sites, only compliance staff and approved researchers have the ability to search the archaeological database.

In addition to the wider survey, three State Archaeological Preserves were also examined as part of an effort to produce three illustrated booklets aimed at a general audience: Pine Island in Stonington, Fort Wooster in New Haven, and Ash Creek Corduroy Road in Fairfield, three areas affected by Hurricane Sandy (see below). The booklets document site conditions, history, and historic context for Archaeological Preserves in these areas.

The booklets discuss preexisting landscapes and events or trends that led to development. For the Ash Creek Corduroy Road, for example, the booklet describes the need for, construction of, and community around this road and other such roads in the early United States. The Fort Wooster booklet discusses the fort’s role, and Connecticut’s role, in the American Revolution, while Pine Island’s history traces the area’s human occupation from Native American settlement to fish processing station to an early twentieth century resort.

RCG&A researchers visited or contacted local towns and historical societies, university and museum collections, historians, and land managers. Illustrations include historic photos of analogous structures (e.g., other corduroy roads), portraits of key persons historically involved with the resources, maps (historic and modern), historic sketches, and other images. Each booklet includes a bibliography of “further reading” citations as well as a complete list of the state’s archaeological preserves. 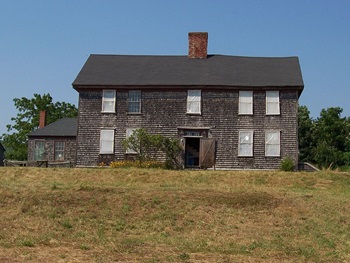 The 422-acre Stanton-Davis farm and homestead in Lower Pawcatuck, Stonington, is distinguished for its twelve generations of ownership, occupation, and farm operations by the Stanton and Davis families. The property also is noted for the documented presence of a well-preserved seventeenth century Pequot village site. The property retains its environmental integrity; the archaeological potential of the approximately 422-acre agricultural, marshland, and woodland landscape located west of the Pawcatuck River is great. Most of this property is protected and either held by the Avalonia Land Conservancy and the Stonington Land Trust or is in Connecticut’s Farmland Preservation Program. The acreage immediately surrounding the historic house is held by the nonprofit Stanton-Davis Homestead Museum.

This project compiled a summary of previous research at the Stanton-Davis property that includes an annotated bibliography, an assessment of archaeological potential based on cartographic review, an assessment of the current land ownership status, and recommendations for ensuring the continued preservation of this important historic property. (Photo: Stanton-Davis Homestead; source: Wikimedia Commons)