Have a question regarding DCF and the coronavirus? Email us at: DCF.COVID-19@ct.gov

The annual Casey Excellence for Children Awards recognize individuals whose inspiring leadership and dedication are helping to build hope and make a difference in the lives of children and families engaged with the child welfare system. 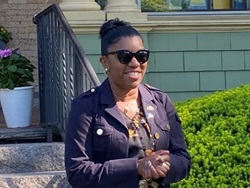 (Hartford, CT) - Casey Family Programs, the nation's largest operating foundation dedicated to safely reducing the need for foster care and building Communities of Hope for children and families, announced today that Commissioner Vannessa Dorantes of the Connecticut Department of Children and Families is one recipient of the 2022 Casey Excellence for Children Awards.

These awards recognize outstanding individuals for their inspiring work, exceptional leadership, and unwavering dedication to improving the well-being of children and families who are engaged with the child welfare system in America.

Dr. William C. Bell, President and CEO of Casey Family Programs, said, “The individuals we honor today come from an array of backgrounds and have contributed to the well-being of children and families in unique ways. However, they all have one thing in common: Every one of them is building hope through their work, their advocacy and their commitment to children and families.”

"The genuine and authentic leadership style of Commissioner Dorantes has resulted in the Department of Children and Families making significant accomplishments since she took office," stated Governor Ned Lamont. "Her passion for the work, collaborative and transparent approaches and unwavering determination to do what is best for Connecticut's children and families make this national recognition of her talents well-deserved."

Commissioner Dorantes was appointed to lead the Connecticut Department of Children and Families (DCF) in 2019 - the first African American to serve in that role for the state of Connecticut.

In March of 2021, Commissioner Dorantes had the distinct privilege of participating in a roundtable discussion on the rippling impacts of Child Poverty with the Vice President of the United States- Kamala Harris, United States Education Secretary Miguel Cardona, Governor Ned Lamont, and US Senators Richard Blumenthal & Chris Murphy.

In October 2021, she received the NAACP award for the 2021 Class of CT'S Most Influential Black leaders.

In January 2022, Commissioner Dorantes was elected to the American Public Human Services Association (APHSA) Executive Governing Board as well as a nomination to the Child Welfare League of America's (CWLA) upcoming Board of Directors.  She also participated in the United States Department of Health and Human Services (HHS) Roundtable discussion to contribute insights on potential reforms of child welfare, including how it interacts with the Medicaid program (CMS).

Commissioner Dorantes frequently speaks on a national level regarding DCF's racial justice work, performance management and continuous quality improvement which all continue to evolve under her administration. This is evidenced by Connecticut's successful exit from the three decades long Juan F. Consent Decree earlier in the year.

"I find it incredibly humbling to receive this award. This truly has been an honor to lead this workforce during this time in our history," stated Commissioner Dorantes. "The children, families and communities in the state of Connecticut deserve collaboration between state agencies and across branches of government. I thank Governor Lamont for his steadfast support and Casey Family Programs for this award."