Although data for 2018 was not available at the time of publication, Connecticut residents appear to be on track to meet the 2020 goal for carbon dioxide emissions despite seeing rising per capita emissions from 2013 through 2015. The total average amount of greenhouse gases (GHG or CO2e)** emitted by each person in Connecticut from the combustion of fossil fuels decreased in 2017 (most recent data available) from 2016 (a reduction of 1.5 percent). In 2017, transportation accounted for 38.1 percent of all GHG emissions in Connecticut (the combustion of fossil fuels), while power plants, industry, and the commercial/residential sector accounted for 20.9 percent, 8.9 percent, and 26 percent, respectively.***61  While Connecticut has made significant progress to reduce emissions of GHG, everyone will have to do more to achieve the 2030 and 2050 goals (see gauge image below). 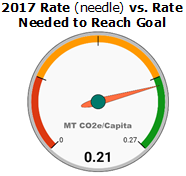 The goals on the chart above have been adjusted to account for the growth in population that is projected for 2030 and 2050. More people are projected to be living in Connecticut in 2030 and 2050, so that each resident will have to work that much harder to reduce carbon dioxide (CO2e) emissions if the statewide goal is to be met.

Technical Note: *Personal Impact indicators illustrate trends in behavior or practices that can be expected to influence the condition of tomorrow's air, water, land and wildlife. **Emissions are reported in terms of carbon dioxide equivalence (CO2e).  While carbon dioxide is the primary GHG, emissions of other GHGs are expressed on the basis of their potential to contribute to global warming, relative to carbon dioxide’s potential. Values from previous reports have been updated based on more current data. *** Percent of Consumption-based Accounting Total.