In 2020, Connecticut preserved 1,015 acres of agricultural land.19 This is more than the 773 acres preserved in 2019, but less than the previous 10-year annual average of 1,266 acres.20  The cumulative acreage preserved by the Connecticut Department of Agriculture (DoAg), which began preserving agricultural land by purchasing development rights in 1978, has increased slowly over the last 10 years. It is estimated that Connecticut’s farms operate on approximately 380,000 acres statewide.21  In 2019, approximately 12,000 parcels, with a combined acreage of approximately 231,000 acres were assessed at use value rather than fair market value, under “Public Act 490”*.22 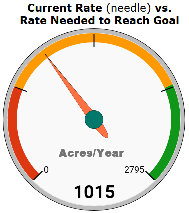 Council projections prepared in 2020 indicate that the goal of preserving 130,000 acres could be reached by 2050 at an annual preservation rate of approximately 2,795 acres per year as depicted in the gauge chart. However, using the average annual acquisition rate for the last ten years, including acreage for 2020, it would take approximately 67 years to achieve the State’s farmland preservation goal.

In addition to the production of food and agricultural products, Connecticut’s farms have a role in mitigation, adaptation, and resiliency to the negative impacts of climate change. Well managed farms store carbon from the atmosphere in soils and plants, capture and store water from extreme precipitation events, and provide for bio-mass derived renewable energy. Soil is one of the sinks for atmospheric carbon, and one that can be managed to mitigate the effects of climate change.23

From 1985 to 2015, it is estimated that Connecticut lost approximately 45,000 acres of “agricultural fields”,24 which represents a loss of approximately 16 percent. The rate of farmland loss may change as development pressure increases or as demand for locally produced food and agricultural products increases. As detailed in the  solar photovoltaics indicator, approximately 450 acres of agricultural land was proposed to be converted from agricultural use to power generation use in 2020**.

Technical Note: *Public Act 490 is Connecticut's law (Connecticut General Statutes (CGS) Sections 12-107a through 107-f) that allows farm, forest, or open space land to be assessed at its use value rather than its fair market or highest and best use value (as determined by the property's most recent "fair market value" revaluation) for purposes of local property taxation. Based on 87 percent of municipalities reporting. **Based on proposals approved or pending by the Connecticut Siting Council in 2020.