Powdery mildew, Microsphaera penicillata.
Symptoms appear as a white, mealy growth on the leaves. This disease is favored by hot, humid weather and usually develops late in the season.

Chemical control of this disease is usually not necessary. Many new cultivars are available which are resistant to powdery mildew.

The most effective means of controlling this disease is to prune and remove infected leaves and twigs as soon as symptoms appear. Pruning cuts should be made at least 2-3" beyond visible symptoms and all tools should be disinfested with 70% alcohol or 10% household bleach.

Aphids, Anuraphis viburnicola.
These aphids cause leaves to be curled and stunted in early spring. The grayish to dark green aphids secrete honeydew on which sooty mold fungus grows, resulting in unsightly, distorted foliage. Control of the insects may be obtained by spraying with malathion, which is among the compounds registered for control of this pest in Connecticut, between April 1 and 15, or by using imidacloprid as a systemic to be taken up by the roots. Consult the label for dosage rates and safety precautions. 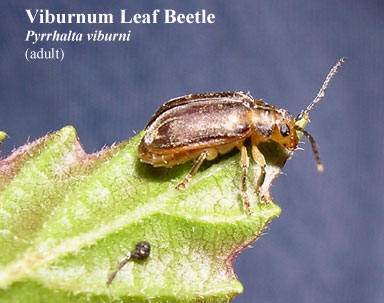 This leaf-feeding beetle was first found in Connecticut in 2004.  Yellow to brown adults are approximately ¼” long and feed on foliage of thin leaved viburnums from July to September.   During the summer and fall, mature females make straight rows of cavities on the undersides of terminal twigs.  They lay multiple eggs in the cavities and cover them with a mixture of feces and shredded bark.  Flattened brown-spotted yellowish larvae hatch mid-May and feed on the emerging leaves.  As a group they skeletonize leaves beginning on the undersides, but with increased size and larger mouthparts, begin to eat through the entire leaf, leaving only the veins.   Approximately a month later they crawl to the ground to pupate in the top 1 – 2 inches of soil.  Adults emerge in three to four weeks, feed, mate and begin laying eggs in the twigs.  Initial feeding by adults results in oval holes in leaves that can progress to total defoliation.  There is one generation each year.

When noticed, larvae and adults can be handpicked.  Twigs with eggs can be pruned off during the winter months when they are most visible.  Azadirachtin, which is among the compounds registered for use against this pest in Connecticut, will control small larvae and repel adults. Bifenthrin, permethrin and rotenone can also be used.  Multiple applications are often necessary. Imidacloprid applied as a systemic to be taken up by the roots may provide season-long control. Consult the label for dosage rates and safety precautions.

Probably the most important control measure for viburnum leaf beetle will be to plant species that are resistant to feeding by this pest.  Ratings of species’ tolerance to viburnum leaf beetles were done by Dr. Paul Weston, Cornell University.  Highly susceptible and susceptible species will die following approximately three successive years of defoliation.