Anthracnose, Apiognomonia veneta.
This is a very common disease throughout Connecticut, especially during cool, wet springs. Symptoms appear as large, brown patches that develop along veins or at leaf margins as the leaves expand in spring. This often results in extensive tattering and distortion and severely infected leaves drop prematurely. The fungus can also cause a blighting and dieback of tender shoots which can result in deformity. Near to complete refoliation usually occurs and trees seem to survive these yearly infections. The same fungus causes a similar condition on white oaks and overwinters on fallen leaves and small branch cankers on both hosts. While common this disease is usually not fatal.

Fertilize trees in the spring, and water during drought to reduce stress. Rake and dispose of fallen leaves to reduce the chance of infection in the following season. Since this disease is usually not a serious problem for the health of the trees, chemical controls are usually not necessary.

Powdery mildew, Microsphaera.
Heavy coating of whitish gray, powdery growth usually on the upper surfaces of the leaves. Some distortion of leaves and young shoots may occur if infection is early in the season. London plane trees are particularly susceptible.

Rake and remove fallen leaves, provide good air circulation around the tree, and avoid late day watering. Fertilize trees in the spring and water during dry weather to maintain tree vigor. Since this disease is usually not a serious problem for the health of the trees, chemical controls are usually not necessary.

Canker stain, Ceratocystis fimbriata f. sp. platani.
Lethal cankers on London plane trees and sycamore seen first as a black or brown coloration, generally in a lens-shaped pattern, on the smooth yellow or green bark. Cankers elongate rapidly, and expand sideways slowly to girdle the branch or trunk. A dark reddish-brown or bluish-black discoloration of the wood extends all the way to the pith of the tree.

Pruning infected material well back of any discoloration in the wood may prevent further spread. Fertilize trees in the spring and water during dry weather to maintain tree vigor. Avoid insect and mechanical injuries to reduce chances of infection.

American plum borer, Euzephera semifuneralis.
The larva of this moth is a secondary pest, injuring stressed trees by feeding on the inner bark and cambium. The winter is passed as a white cocoon located under loose bark. Cream colored moths with a 1" wingspan appear in May. They mate, and the female lays eggs singly or in groups in bark crevices. Eggs hatch in a matter of days and the young larvae, after finding an opening, enter the bark. They begin feeding, making frequent holes to push out the red frass. The larvae mature in 4 - 6 weeks and are about 1" long with a brown head capsule. Among the products registered for control of this pest in Connecticut is permethrin, which can be applied to the stems and trunks of affected trees in mid to late May to manage adults. The insect pathogenic nematode, Steinernema carpocapsae, can be applied to stems and trunks to control larvae in burrows. Consult the label for dosage rates and safety precautions.

Aphids.
A large gray aphid, Longistigma caryae, is found on the bark and twigs of sycamore. Insecticidal soap or malathion, which are among the compounds registered for use against this pest in Connecticut, will control this insect as a contact spray. Imidacloprid applied to the soil as a systemic also works well. Consult the labels for dosage rates and safety precautions. 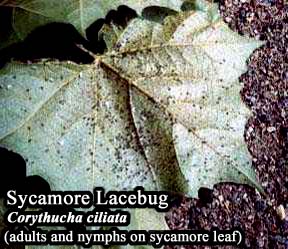 Sycamore lace bug, Corythucha ciliata.
This lacebug is very common on the undersides of sycamore leaves. On the upper surface, small white marks show where this bug has sucked the sap from the underside of the leaf. The adult bugs overwinter under the edges of the bark and other places where they can find protection. Soon after the leaves unfold, the bugs emerge and lay eggs on the undersides of the leaves. The eggs hatch, and the nymphs pass through five stages and become adults in a little more than a month. Two or more generations occur per year. Malathion, ultrafine horticultural oil or insecticidal soap, which are among the compounds registered for use against this pest in Connecticut, sprayed twice, ten days apart, in the spring will control this pest on shade trees. Imidacloprid applied as a systemic for root uptake will provide at least one season of control. Consult the labels for dosage rates and safety precautions.

Sycamore leaf folder, Ancylis platanana.
The caterpillar of this little moth folds the leaf and feeds in the fold, chiefly along the midrib near the base of the leaf. The adult has a wingspread of about 1/2" and is dull orange in color with darker, wavy bands. Spraying shade trees with acephate, malathion, or spinosad, which are among the compounds registered for use against this pest in Connecticut, will control it. Consult the label for dosage rates and safety precautions.

Sycamore plant bug, Plagiognathus albatus.
This pest overwinters as an egg near the leaf bud. Egg hatch follows the emergence of leaves in the spring. Adults and nymphs are yellowish-green with dark eyes. They feed on leaves causing chlorotic spotting. These areas turn brown and fall out of the leaves, gives them a ragged appearance. The nymphs can be controlled by spraying with ultrafine horticultural oil, insecticidal soap or malathion which are among the compounds registered for control of this pest in Connecticut. Imidacloprid applied as a systemic to be taken up by the roots will also provide season-long control. Consult the label for dosage rates and safety precautions.

Terrapin scale, Mesolecanium nigrofasciatum.
This small, reddish, oval, convex scale occurs on the small twigs of sycamore, often killing them. It varies from 1/16 - 1/8" long and is usually reddish-brown mottled with black. Eggs are deposited in June under the old shells and there is one generation each year. Among the compounds registered for control of this pest in Connecticut are horticultural oil, malathion and imidacloprid. Horticultural oil may be applied in early spring to control overwintering eggs, or use a spray of malathion in April to kill crawlers. To determine when crawlers are active, wrap black tape around infested limbs and coat the tape with Vaseline. The light-colored crawlers are easily seen on the tape. Imidacloprid may also be applied as a systemic to be taken up by the roots. Consult the labels for dosage rates and safety precautions. 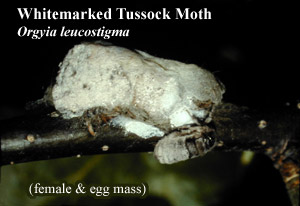 Whitemarked tussock moth, Orgyia leucostigma.
The caterpillars of this insect feed on sycamore. This insect has two generations each year, and spends the winter in frothy white egg masses on the trees. Eggs hatch in late May and the caterpillars mature about July 1. They make their gray cocoons on the trees. Two weeks later, the moths emerge and females usually lay egg masses on the old cocoons. The second generation larvae hatch in July and mature in August. The caterpillars reach a length of about 1 1/2". They are striped lengthwise with brown and yellow, and are hairy, with four upright white tufts on the front half, two long black hairs near the head, and a similar one on the tail. There is a bright red spot just behind the head. The female is ash-gray without wings. The male has prominent feathered antennae and ash-gray wings with darker gray markings. It has a wingspread of about 1 1/4". This caterpillar can be controlled by sprays of malathion, carbaryl, spinosad or Bacillus thuringiensis var. kurstaki, which are among the compounds registered for use against this pest in Connecticut. Consult the label for dosage rates and safety precautions.