Plant Health Problems
The disease problems on squash are similar to those of other Cucurbita. See Cucurbit for a detailed discussion of the common diseases of this host.

Garden springtail. Bourletiella hortensis.
Seedlings may be fed upon by minute dark purple, yellow-spotted insects that eat small holes in the leaves. These insects have no wings but are equipped with forked, tail-like appendages by means of which they throw themselves into the air. They are usually found only on small plants near the surface of the soil. Control is not usually necessary.

Melonworm, Diaphania hyalinata.
On occasion, squash may be injured by slender, active greenish caterpillars with two narrow white stripes running the full length of their bodies. They feed mostly on the foliage, but may burrow into the fruit. They are rare, however, and no specific control measures have been needed.

Pickleworm, Diaphania nitidalis.
This insect also infests squash. This insect occasionally causes damage to late maturing crops. The white, yellowish or greenish larvae have yellow brown heads and are about three-fifths of an inch long when mature. They burrow in the bud, blossom, vines and fruit. Control is not generally needed. 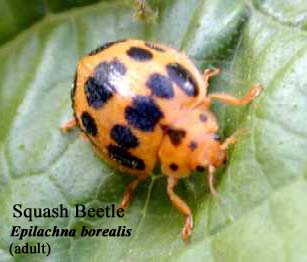 Squash beetle, Epilachna borealis.
This ladybeetle and the Mexican bean beetle are the only two kinds of ladybeetles that injure plants in Connecticut. All of the others are beneficial and devour aphids and scale insects. The squash ladybeetle hibernates in sheltered places and emerges to lay its eggs in June on the underside of the leaves. Both adults and larvae feed on the leaves. The larvae usually appear about the middle of July. They are about 5/8" long, bright yellow with six rows of long, black, branched spines. The adult is dull yellow and marked with 12 black spots.

There is one generation each season. Control is not usually necessary.

Squash bug, Anasa tristis.
The squash bug is dark brown, about 5/8" long, and hibernates in protected places. When disturbed, they produce a distinctive smell. The overwintered bugs feed upon the young plants as soon as they appear above ground. The bug punctures the plant and sucks the sap. Later, the females lay clusters of shiny brown eggs on the undersides of the leaves. After hatching, the nymphs pass through five molts in 4 or 5 weeks. There is one generation per year.

Because the squash bug prefers to hide near the plants, the use of mulch may increase squash bug populations. Control with insecticides is difficult, due to the habit of hiding under debris, and is rarely necessary. Squash plants beyond the seedling stage can tolerate heavy squash bug feeding. If needed, malathion may be used on seedling plants.

Squash vine borer, Melittia cucurbitae.
This insect is often damaging to squash. The moth flies during the day. Its abdomen is ringed with orange and black stripes, the front wings are dark olive-green to black, and the hind wings are clear with a brown border. The adult moths lay eggs near the base of the plant from late June through July and early August, and the larvae enter the stems where they live as borers. Wilted runners and vines and deposits of frass near the base of the stems indicate their presence. The larvae are white with brown heads and about 1" long. When mature, they leave the plant and descend into the soil. There they spin a cocoon and remain until the following spring when they pupate. There is one generation a year.

The squash vine borer has a greater effect on summer squash, particularly bush varieties, than on winter squash and pumpkins. Some varieties of winter squash are highly resistant, including butternut varieties and 'Sweet Mama'. Row covers can be used to exclude the egg laying moths until the plants flower. At flowering, they must be removed to allow for pollination. Make sure no squash was planted in the area the year before, and that the edges of the row cover are securely buried.

Among the compounds registered for control of squash vine borer in Connecticut are malathion or azadirachtin (neem). Chemical control is difficult because once the larvae tunnel into the stem they cannot be reached with insecticides. In order to be effective the spray must be aimed at the stems near the base of the plants, beginning in late June and continuing at 7 day intervals through the egg-laying season. Consult the label for dosage rates, safety precautions, and observe the required waiting period between insecticide application and harvest.

Striped cucumber beetle, Acalymma vittatum.
This beetle may damage young squash seedlings. The beetles hibernate under trash or in the ground, and appear on the plants as soon as the seed germinates. The greatest injury occurs to the young plants, and the beetles feed usually on the underside of the leaves.

The beetles are ¼" or less long, with thorax and wing covers yellow, with three black longitudinal stripes that extend to the tips of the wing covers, and with a black head and abdomen. It should be distinguished from the similarly striped female western corn rootworms, which have yellow abdomens and are not important pests of cucurbits. The adults can transmit the organisms that cause bacterial wilt. Cucumbers and muskmelons are generally susceptible to this disease, although watermelons and some varieties of squash and pumpkin are not. The eggs are laid the last of June on the surface of the ground or in crevices in the soil, and oviposition continues for about a month. The eggs hatch in about a week and the young larvae work their way downward along the main stem, where they burrow into it, causing much injury. A full grown larva is one-third of an inch long, slender and white with brown head and thorax. The adults appear again in early to mid-August. There is only one generation annually. See Cucumber Beetle fact sheet.

Whiteflies.
The greenhouse whitefy, Trialeurodes vaporariorum, the sweetpotato whitefly, Bemisia tabaci, and silverleaf whitefly, Bemisia argentifolii, commonly infest plants under glass and are often carried into the field where they may persist. The life cycles of these species are similar. The tiny, white moth-like adult has a mealy appearance due to the small particles of wax that it secretes. It lays groups of eggs on the undersides of leaves. The eggs hatch into small oval crawlers, which then settle down and become scale-like nymphs that suck sap from stationary locations on the leaves. These then spend about 4 days in an immobile pupal stage before becoming adults. About 5 weeks are required to complete the life cycle in the greenhouse.

Yellow sticky traps are an effective way to monitor populations of whiteflies, and may even be attractive enough to reduce minor infestations.

Biological controls can be effective against whiteflies, especially in a greenhouse environment. The predatory ladybeetle Delphastus pusillus, specializes in whiteflies and feeds on all three whitefly species. The parasitoid, Encarsia formosa, can control the greenhouse whitefly in the greenhouse, but not the other species. Another parasitoid, Eretmocerus californicus, attacks all three species and can assist in controlling minor infestations in the greenhouse. Insecticidal soap or ultrafine horticultural oil, sprayed on the undersides of leaves, can be used against whiteflies in the greenhouse or the field. Azadiractin (neem) is registered for control of this pest in Connecticut. To be most effective, this material has to be directed to the undersides of the leaves. Repeat applications of sprays, a minimum of 7 days apart, will probably be needed because some stages in the life cycle are not affected by insecticides. At lower temperatures the insect develops at a slower rate and spray applications can be spaced further apart. Chemical control using conventional insecticides is difficult because of widespread insecticide resistance. Consult the label for dosage rates, safety precautions, and preharvest intervals.