Damping-off, Pythium sp., Rhizoctonia solani, Sclerotinia sclerotiorum.
This disease is a rotting of the roots and the base of the stem so that the seedling falls over and dies. Damping-off is caused by a number of different fungi which live in the soil and may attack seedlings of almost any crop. The disease is favored by high soil moisture and cool temperatures.

To avoid damping-off, start seedlings in pasteurized soil or use soilless potting mix, give them only enough water to keep the plants growing normally, and ventilate the growing space during the day. The use of fungicide-treated seed can also reduce damping-off. Once plants are beyond the seedling stage, they are not susceptible to damping-off.

Root and crown rot, Rhizoctonia solani, Pythium sp., Fusarium sp.
Symptoms appear as wilting and a slow or rapid collapse of the plant. The roots can appear brown and water-soaked instead of white. A water-soaked lesion can often appear at the base of the stem.

Downy mildew, Peronospora spinaciae.
Diseased plants show yellow leaf spots which have a purplish fuzzy growth on their undersides. These spots may quickly grow together, killing the infected leaf or the entire plant. The fungus which causes this disease is soil- and seedborne. It is favored by wet cool weather. Downy mildew is not usually important on spinach in Connecticut.

To avoid the disease, use clean seed, plant on well-drained soil, and use a three-year rotation. If the disease becomes a problem, do not plant winter spinach, which may carry over downy mildew from one growing season to the next. The cultivars Savoy Hybrid 612 and Melody have some resistance.

Mosaic, viruses.
Mosaic diseases are caused by viruses. Spinach plants with mosaic have mottled leaves and appear stunted. Most of these viruses are carried by aphids.

To avoid mosaic on spinach you should control insects and reduce the number of weeds around the field. Infected plants should be pulled up and discarded.

Garden springtail, Bourletiella hortensis.
Small seedlings may be fed upon by minute dark purple, yellow-spotted insects that eat small holes in the leaves. These insects have no wings but are equipped with forked, tail-like appendages by means of which they throw themselves into the air. They are usually found only on small plants near the surface of the soil. Control is not usually necessary.

Potato flea beetle, Epitrix cucumeris.
This common flea beetle feeds upon spinach. This is a small, black, jumping flea beetle that feeds upon the leaves of potato, tomato, tobacco, and many other plants, eating out small round holes from the underside, but leaving the upper epidermis. The remaining tissue soon dies, however, and falls away, leaving holes through the leaves which turn yellow and later turn brown and die. This beetle is not much more than one-sixteenth of an inch in length. It lives through the winter under rubbish and in other sheltered places, and may first be found in the spring on plantain and other weeds, sometimes also on the leaves of apple, wild cherry, and maple. As soon as the preferred food such as potato and tomato plants appear in the garden or field, the flea beetles gather upon them. The overwintering beetles lay eggs in the soil in June. The larvae feed upon tubers and roots of the host plants. An abnormal growth sometimes surrounds each injury. The larvae transform and beetles emerge early in July.

These beetles feed on foliage as long as plants are green and temperatures are favorable. These insects then rest until the following spring. If the flea beetles are controlled in the spring when they first begin feeding, fewer beetles will be present in the fall and the following spring. See Flea Beetle fact sheet. 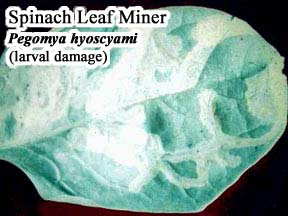 Spinach leaf miner, Pegomya hyoscyami.
This is the most destructive insect pest of spinach. It also infests beet, chard, and several common weeds, including nightshade, chickweed, plantain, and especially lambsquarters. There are three or four generations each season and the insect winters in the soil in the pupal stage. The adult is a gray fly about 1/4" long. It emerges in April or May and lays white cylindrical, netted eggs in clusters of from two to five on the underside of a leaf. They hatch in 4 to 6 days and the young maggots enter the tissue of the leaf where they make first thread-like mines, and then blotches which may eventually coalesce to involve the entire leaf. If food becomes exhausted, they migrate to other leaves. The larva, about 1/3" long, matures in a period that varies from 7 to 16 days. It then descends 2 or 3" into the soil and pupates, the flies emerging 14 to 25 days later.

Row covers can be used to keep the flies away from the plants, but the area planted must have been free of both cultivated and weed hosts in the previous year. Deep spring plowing can destroy overwintering leafminer pupae. Spinach grown late in the fall, over the winter, and very early in the spring may escape injury. The gardener can find and crush the eggs on the leaf and remove leaves with mines and destroy them. Malathion is among the compounds registered for control of this pest in Connecticut. Chemical control must be directed at the adults, since larvae are protected from insecticides inside the leaf. Consult the label for dosage rates, safety precautions, and observe the long required interval from application to when the spinach may be harvested.

Spinach flea beetle, Disonycha xanthomeIas.
This greenish-black beetle with a yellow thorax is about 1/5" long. It hibernates as a beetle and appears in the field in early spring when it deposits clusters of orange eggs on the ground at the base of the plant. The larvae crawl to the plant and the short dirty-gray to purplish forms feed on the underside of the leaves. When disturbed, the larvae drop to the ground and remain hidden until the danger is past. They enter the soil and pupate in earthen cells near the surface. See Flea Beetle fact sheet.