Plant Health Problems
See Perennials for a detailed discussion of problems that may occur and are common to most herbaceous ornamentals.

Foliar nematodes, Aphelenchoides spp.
These plant-parasitic worms attack virtually all plant parts and may cause leaf lesions, yellowing, necrosis and leaf drop, and bud malformation. Water-soaked blotches appear on the underside of the leaf and may involve the entire leaf. The whole plant may become stunted. The nematodes live and move in water films.

This disease can be minimized by reducing leaf moisture by avoiding overhead irrigation. It is also helpful to remove symptomatic tissues, plant debris, or infected plants. 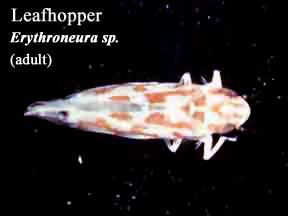 Grape leafhopper, Erythroneura comes.
Both nymphs and adult leafhoppers suck sap from the undersides of the leaves, which soon turn brown. There are two generations each year. In late fall, the adults seek protection in woodlands, brush, weed, or grass areas, where they pass the winter. The white adult is only 1/8" long, and is strikingly marked with yellow and red. Among the compounds registered for control of this pest on ornamental plants in Connecticut are methoxychlor and diazinon. When needed, sprays of either of these, applied to the undersides of leaves when insects are first noticed, will control both adults and nymphs. Imidacloprid can also be applied as a systemic to be taken up by the roots, but also may only be used on Salvia grown as ornamentals. Consult the label for dosage rates and safety precautions.

Greenhouse orthezia, Orthezia insignis.
This is a dark-green or brown scale-like insect that secretes wax as it feeds, leaving behind a long plate of white wax. It damages plants by withdrawing sap. When needed, malathion, which is among the compounds registered for control of this pest in Connecticut, can be used as a foliar spray to control this insect on ornamental Salvia. Imidacloprid can also be applied as a systemic to be taken up by the roots, but also may only be used on Salvia grown as ornamentals. Consult the label for dosage rates and safety precautions.

Twospotted spider mite, Tetranychus urticae.
This pest infests the undersides of the leaves, which become light yellow in color, and the plants have a generally unhealthy appearance. Sometimes the mites form webs, which more or less enclose the upper as well as the lower leaf surface. Among the compounds registered for control of this pest in Connecticut are insecticidal soap and ultrafine horticultural oil. Spraying with insecticidal soap will give sufficient control if applied at least twice at 7-10 day intervals. The predatory mite, Neoseiulus fallacis, is most commonly found feeding where there are mite infestations. A single application of ultrafine horticultural oil (1/2 - 1% dilution) can be effective if predatory mites are present. Special care should be taken with soap or oil to obtain thorough spray coverage, because they only work on contact. Consult the label for dosage rates and safety precautions. For ornamentals, hexythiazox or abamectin (a restricted use product) are also effective. Avoid applying carbaryl or pyrethroids, which tend to be much more toxic to the predators than to the pest spider mites.

Whiteflies.
The greenhouse whitefy, Trialeurodes vaporariorum, the sweetpotato whitefly, Bemisia tabaci, and silverleaf whitefly, Bemisia argentifolii, commonly infest salvia, as well as many other kinds of plants under glass and are often carried into the field where they may persist. The life cycles of these species are similar. The tiny, white moth-like adult has a mealy appearance due to the small particles of wax that it secretes. It lays groups of eggs on the underside of leaves. The eggs hatch into small oval crawlers, which then settle down on the undersides of leaves and become scale-like. These insects spend about 4 days in an immobile pupal stage before becoming adults. About 5 weeks are required to complete the life cycle in the greenhouse. Yellow sticky traps are an effective way to monitor populations of whiteflies, and may even be attractive enough to reduce minor infestations. Biological controls can be effective against whiteflies, especially in a greenhouse environment. The predatory ladybeetle, Delphastus pusillus, specializes in whiteflies and feeds on all three whitefly species. The parasitoid, Encarsia formosa, can control the greenhouse whitefly in the greenhouse. Another parasitoid, Eretmocerus californicus, attacks all three species and can assist in controlling minor infestations in the greenhouse. Insecticidal soap or ultra-fine horticultural oil, which are among the compounds registered for control of this pest in Connecticut, sprayed on the undersides of leaves, can be used against whiteflies in the greenhouse or the field. Azadiractin (neem), also directed to the undersides of the leaves, can also be used. Repeat applications of sprays will probably be needed because some stages in the life cycle are dormant and not affected by insecticides or other sprays. Chemical control using conventional insecticides is difficult because of widespread insecticide resistance. Season-long control can be achieved on ornamental plants with imidacloprid applied as a systemic taken up by the roots. Consult the label for dosage rates and safety precautions.