Plant Health Problems
See Rhododendron for a discussion of problems that may occur and are common to many plants in this family. For additional information, see the fact sheet on Common Problems of Rhododendron, Mountain Laurel, and Azalea.

Leaf spot, Phyllosticta kalmicola.
Circular or irregular brown spots with purple borders are typical of this fungus. Tiny black pustules are peppered over the spots. Infected leaves are unsightly, but generally do not cause serious harm to the plant. Many of the newer cultivars are resistant.

Removal of diseased leaves help control this fungus on laurel and other members of the Heath family. Several other leafspotting fungi may be found on laurel, but control is the same. See Rhododendron for a more detailed discussion of this disease.

Management of this disease can be achieved by raking and removing fallen leaves in autumn. Chemical control is usually not necessary. However, fungicide sprays can be applied when new growth appears in spring. Several applications may be necessary during periods of extended wet weather. Among the compounds registered for use in Connecticut are chlorothalonil, mancozeb, and thiophanate-methyl. Consult the label for dosage rates and safety precautions.

Leaf scorch and dieback, Rhizoctonia solani.
New leaves may appear scorched or a mottled green and yellow, with or without burnt tips accompanied by dieback of branches. Very fine roots are rotted off, and the larger fibrous roots are entirely or partly brown. Laboratory examination is necessary to determine the agent responsible for the trouble. Similar symptoms may be produced by too much fertilizer or by injury to the roots, whether from grubs, borers, or mice. A careful examination of the bush and soil around it will often reveal other causes (see shoestring rot, below).

Cultural practices to control this disease include improvement of drainage and avoidance of excess irrigation.

Shoestring root rot, Armillaria mellea.
Symptoms appear as a yellowing of leaves and a general decline and dieback of branches and limbs. This decline often develops over a period of years. The shoestring fungus penetrates the roots and/or bark at ground level and may be recognized by the white mycelial fans found under the bark or the long black shoestring-like rhizomorphs in or under the bark or in the soil.

Control of this fungus is difficult. Removal of dead plants and especially dead wood is important. The fungus is completely intolerant of drying, so the chances of spreading the fungus to uninfected plants will be reduced by thorough drying of wood chips and leaf mold before using them as a mulch or amendment.

Winter injury.
Winter injury is a general term applied to a group of environmentally caused problems which have little in common but that they occur during the winter. Winter injury predisposes shrubs to secondary or opportunistic pests. Symptoms vary, but usually are characterized by marginal or tip browning of leaves, dieback of growing tips, and bark splitting. Water evaporates from the leaves on windy or on warm sunny days and cannot be replaced since the water in the soil is still frozen or unavailable to plant roots.

For more information, see the fact sheet on Common Problems of Rhododendron, Mountain Laurel, and Azalea.

Black vine weevil, Otiorhynchus sulcatus.
The larvae of this weevil often injure mountain laurel in nurseries and ornamental plantings by feeding on the roots. The small grubs devour the small roots and progress to chewing the bark from the larger roots, often girdling them. The tops of girdled plants first turn yellow, then brown, and the severely injured plants die. Large landscape plants tolerate root grazing quite well, but leaf notching by adults can be unsightly. The 1/2" long adult weevil is black, with a beaded appearance to the thorax and scattered spots of yellow hairs on the wing covers. Only females are known, and the adults are flightless. They feed nocturnally, notching the margins of the foliage. The legless grub is white with a brown head and is curved like grubs of other weevils. Adults and large larvae overwinter, emerging from May - July. The adults have to feed for 3-4 weeks before being able to lay eggs. Treating the soil with insect pathogenic nematodes may control the larvae and should be the first line of defense for landscape plantings. Acephate and fluvalinate are among the compounds registered for control of this pest in Connecticut, and may applied when there is adult feeding and before egg laying starts. The usual timing for these foliar sprays is during May, June and July at three week intervals. Insecticide resistance is very common; be aware that adults may appear to be dead following contact with fluvalinate, but may recover from poisoning within a few days. Consult the labels for dosage rates and safety precautions 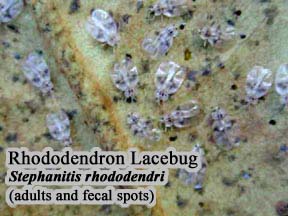 Lacebugs, Stephanitis pyrioides and S. rhododendri.
This lacebug commonly infests mountain laurel. The adults and nymphs of the azalea and rhododendron lacebug, respectively, suck sap from the undersides of leaves. The results of infestation show on the upper leaf surface as a mottled or white peppered appearance, and the under surface of the leaf is brown-spotted with excrement. The winter is passed as eggs inserted on the underside of the leaf, usually near the midrib. They hatch in May, and the nymphs become mature in June and lay eggs in June and July for the second generation, the nymphs of which appear in August. These nymphs mature and the adults lay eggs in the leaves that hatch the following spring. The control measures consist of spraying the undersides of the leaves to control the nymphs and adults by using acephate or insecticidal soap, which are among the compounds registered for control of this pest in Connecticut. The first spray is required late in May and the second in July. Imidacloprid applied as a systemic to be taken up by the roots will give at least one year of control. Consult the label for dosage rates and safety precautions.

Mulberry whitefly, Tetraleurodes mori.
In certain localities, the undersides of the leaves of mountain laurel become literally covered with the nymphs of this insect. This whitefly was named from the mulberry, presumably because mulberry leaves are commonly infested and a favorite host, although the insect occurs on many other kinds of trees and shrubs. The oval nymphs or larvae occur on the undersides of the leaves, and are dark brown or black, fringed with marginal white wax. The wings of the adult are white, spotted with red and brownish black. Usually, control measures are not employed. Imidacloprid, which is registered for use against this pest in Connecticut, can be applied to the soil as a systemic. Consult the label for dosage rates and safety precautions.