Leaf spots, Septoria, Alternaria.
Circular to irregular tan to brown spots develop on leaves. These can vary in size, color, and number, depending upon the pathogen.

Efforts to maximize plant vigor by fertilizing and watering are helpful. However, watering should be done early in the day to give the foliage a chance to dry before nighttime. It is also helpful to pick and remove symptomatic leaves as soon as they develop. Although not usually necessary, applications of fungicides can be made when new growth emerges in the spring. Among the compounds registered for use in Connecticut are chlorothalonil and thiophanate-methyl. Consult the label for dosage rates and safety precautions.

Wilt, Fusarium oxysporum, Verticillium sp.
Plants may be infected at any stage; young plants can suddenly dry up or older plants might develop a pale green color accompanied by wilting of lower leaves, often first appearing on one side of the plant. This is frequently followed by a general wilting and death of the entire plant. Plants may wilt in the middle of the day and seem to recover at night. Some plants may show no signs of infection until they come into flower, when they suddenly collapse. When the stem is cut, a brown discoloration or streaking may appear in the vascular tissues.

Control of these diseases is difficult since the pathogens are commonly found in soil. One of the key strategies for control of vascular wilts is prevention. Therefore, it is important to avoid planting marigolds in infested soil. It is also helpful to maximize plant vigor by good cultural care and watering. Careful handling of plants will avoid root injury which enables the fungus to enter the plant. Since repeated use of the same area greatly increases the amount of disease, rotation is essential. When available, it is also helpful to use resistant varieties. Chemical controls are not effective for these fungi.

Good sanitation practices including grooming the plants and removing spent or senescing flowers can minimize the potential for infection. These affected tissues should be carefully removed and discarded when they are dry. It is also important to avoid wetting the flowers when watering and crowding plants. Adequate spacing between the plants can promote good air circulation. Control can also be achieved with the use of fungicide sprays applied as soon as symptoms are visible. Among the compounds registered for use in Connecticut are iprodione, chlorothalonil, and thiophanate-methyl. Consult the label for dosage rates and safety precautions.

Root rot, Rhizoctonia solani.
The aboveground symptoms are nonspecific and include a general wilting, decline, and collapse of the foliage and the entire plant. This general droopiness or flaccid appearance is often accompanied by browning and rotting of the roots and the crown. Yellowing and death of the outer leaves follows, until finally the entire plant is dead.

Control can be difficult once plants are infected so prevention is important. It is helpful to avoid overwatering, especially in heavy soils, and to avoid watering directly onto the plant. Highly symptomatic plants can be rogued and removed since recovery is unlikely. Attention to spacing is also helpful since it improves air circulation and drying of the foliage.

Aster yellows, phytoplasma.Symptoms consist of a yellowing or clearing of the veins in newly infected leaves, shortening of the internodes of the main stem, and production of long axillary breaks which create a yellowish witches' broom. If plants are infected young, they remain stunted, and if flowers are produced, they are small, abnormal, and often exhibit phyllody, a condition in which flower parts revert to green tissues. Symptoms do not always appear on the entire plant, but may show on only one stem, depending on the time of infection. This phytoplasma is transmitted by leafhoppers. Since the pathogen infects many plants (e.g., daisies, chrysanthemums, plaintain, echinacea, and rudbeckia), marigolds may become infected from neighboring plants.

Strategies for control include promptly roguing and removing diseased plants as well as control of the leafhopper vectors.

Imported longhorned weevil, Calomycterus setarius.
The grayish adults are about 1/8" long. They emerge from late June through July and early August. Eggs are laid in the soil, and larvae are present from midsummer until June of the following year. They feed on the small roots of host plants but more often on those of legumes or on organic matter. Both wild and cultivated plants are attacked. Usually, the adults feed on the upper surface at the edge of the leaves and on flowers in sunlight or shade. Host plants include annuals, perennials, shrubs, deciduous trees, and evergreens. Larvae may be controlled by drenching insect pathogenic nematodes around the roots. 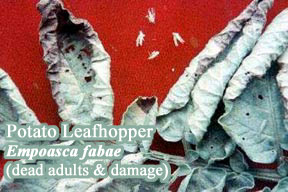 Potato leafhopper, Empoasca fabae.
This 1/8" long slender, pale green insect sucks plant juices and causes a blanching of foliage. This and other leafhoppers feed on many species of flowers and vegetables. Acephate or carbaryl, which are among the compounds registered for use against this pest in Connecticut, sprayed in mid-June and, if needed, again in July and August should give good control. Imidacloprid, applied as a soil drench early in the season, will provide systemic control. Consult the labels for dosage rates and safety precautions.

Plant bugs.
The fourlined plant bug, Poecilocapsus lineatus, and tarnished plant bug, Lygus lineolaris, lay eggs in soft stems. They hatch about the middle of May and the young bugs suck the sap from the tender leaves of marigold and many other plants. They molt five times and when mature, about the middle of June, they have wings and are nearly 1/3" long. The fourlined plant bug is yellow-green, marked lengthwise on the wings with four black stripes alternating with three green stripes. The injury to the leaves consists of sunken areas around the punctures. These areas later appear as circular transparent spots and finally as circular holes. The tarnished plant bug is mottled brownish, 1/5" long, with a yellow "Y" shape pattern on its back. There is one generation each year of the fourlined plant bug and two to five generations yearly of the tarnished plant bug. The nymphs can be managed by spraying with ultrafine horticultural oil, insecticidal soap or malathion, which are among the compounds registered for control of this pest in Connecticut. Consult the labels for dosage rates and safety precautions.