Plant Health Problems
Black locust is not related to honeylocust (Gleditsia), and has no serious disease problems.

Aphids.
The dwarf flowering locust or rose acacia is sometimes infested by aphids. A spray of malathion, horticultural oil or insecticidal soap, which are among the compounds registered for use against this pest in Connecticut, will control them. Imidacloprid is also effective when applied to the soil systemic uptake. Consult the label for dosage rates and safety precautions. 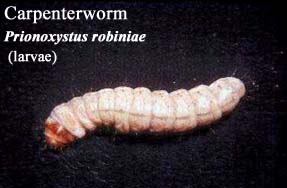 Carpenterworm, Prionoxystus robiniae.
Large galleries are often made in the trunks and larger branches of locust, ash, oak and maple by the carpenterworm, and large unsightly scars are evident wherever this insect occurs. Fortunately, this insect is seldom sufficiently abundant to cause severe injury. The moths emerge in June and July, and the females seem to prefer the vicinity of wounds for depositing eggs. The young larvae at first feed on the inner bark, then burrow in the wood, chiefly excavating longitudinal galleries. The mature larva is about 2-1/2" long, pink or flesh-colored, with brown head, thoracic and anal shields. The adult moth has a wing spread of about three inches and is gray with brown and black markings. The life cycle of this insect extends over 3-4 years. Removal and destruction of infested branches helps to reduce damage. Spraying the insect pathogenic nematode Steinernema carpocapsae to infested areas may provide control. 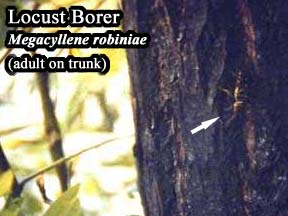 Locust borer, Megacyllene robiniae.
This is a beetle that closely resembles the painted hickory borer (see Plant Pest Problems, hickory), but the adults appear in late summer instead of spring. It is very destructive to black locust and has ruined many plantings. Eggs laid in crevices of bark in September soon hatch and young larvae tunnel and overwinter in outer bark, going into wood the following spring where they excavate their characteristic galleries. Evidence of infestation is sawdust falling down on the bark of the trunk and wet spots around the holes where the sawdust was ejected. Ugly scars later show where wounds have partially healed. There is one annual generation, and beetles are very abundant on goldenrod blossoms in September. In general, trees are not greatly injured after reaching a trunk diameter of about 6". Irrigate trees during drought to prevent stress. Permethrin or carbaryl, which are among the compounds registered for control of this pest in Connecticut, applied to trunks at the time of adult activity can prevent egg laying. Consult the label for dosage rates and safety precautions.

Locust leafminer, Odontota dorsalis.
This small beetle, less than 1/4" long, feeds on the leaves, and the larva is a miner in the leaves of locust. It is orange-red with a median black line along the back. It lays clusters of three to five eggs in late May or early June on the undersides of the leaves. The larvae hatching from these eggs work their way into the leaf through one entrance hole and live in a common blotch mine that may involve half the leaf. Later, they go to other leaves and make separate mines. Larvae feed for about three weeks, pupation takes place in the mine, and beetles emerge a week or 10 days later and overwinter. There is one generation each year. Thorough spraying of the fully developed foliage in early June using acephate or spinosad, or use of imidacloprid as a soil-applied systemic, which are among the compounds registered for use against this pest in Connecticut, should control the beetles and hatching larvae. Consult the label for dosage rates and safety precautions.

Locust treehopper, Vanduzea arquata.
This treehopper is often very abundant on locust and it is possible to collect several hundred specimens from one tree. All suck plant sap, and there are probably three or four generations a year in Connecticut. The adult is a small brown beechnut-shaped insect less than 1/4" long and chocolate brown in color. If control is necessary, spraying with malathion, which is among the compounds registered for use against this pest in Connecticut, will be helpful. Imidacloprid applied to the soil as a systemic should also be effective. Consult the label for dosage rates and safety precautions.

Locust twig borer, Ecdytolopha insiticiana.
The larva of this insect tunnels in the small twigs of black locust, causing irregular swellings from 1 to 3" long. The borer emerges from the twig through a small exit hole usually between two thorns. The adult is a brown moth with wingspread of 3/4". The forewings are chocolate brown crossed near the apex by two light gray bands forming a triangle. The infested shoots may be cut and burned, if allowed, in August before adults emerge.

Silverspotted skipper, Epargyreus clarus.
This is one of the largest of the skipper butterflies, and the larvae feed on the leaves of locust, especially the rose acacia. Each caterpillar fastens together several leaflets with silk threads, making a case in which it lives and feeds. The caterpillar is leaf-green with a brown head. The butterfly is brown with yellow and white quadrangular spots on the forewings. Both front and rear wings are sharp-pointed. Spraying carbaryl, malathion, or Bacillus thuringiensis var. kurstaki, which are among the compounds registered for use against this pest in Connecticut, when larvae are present should provide control. Consult the labels for dosage rates and safety precautions.