Botrytis blight, Botrytis spp.
This is the most widespread and common disease of lilies. Symptoms appear as oval or circular spots which are initially reddish-brown and develop pale centers and purplish margins. These spots may run together and rot the entire leaf. These can progress into the stem and cause the stalk to fall over. If the spots dry out, they turn brown or gray. Buds or flowers may turn brown and rot and are often covered with the diagnostic gray, fuzzy growth of the fungus. This disease shows up and spreads rapidly under cool, humid conditions especially if plants are crowded.

Control involves cutting and removing any affected plant parts after the tops are killed in the fall. It is also helpful to avoid overhead irrigation and crowding of the plants. When conditions are favorable, applications of fungicides can be made when new growth emerges in the spring. Among the compounds registered for use in Connecticut are chlorothalonil, thiophanate-methyl, iprodione, and mancozeb. Consult the label for dosage rates and safety precautions.

Bulb rot, Rhizopus spp.
Water-soaked spots which turn dark brown develop on the scales. Infected bulbs become soft and have an acrid odor. Some bulbs are covered with a mass of fungal growth.

Control involves roguing and destroying infected plants and bulbs. It is also important to avoid wounding bulbs during digging.

Control is achieved through careful digging to avoid wounding. Infected bulbs should be destroyed.

Bacterial soft rot, Erwinia carotovora.
Infected bulbs have a strong odor and are soft and mushy. Tops may appear water-soaked and collapse.

All infected bulbs should be destroyed. It is helpful to carefully remove any symptomatic foliage and plant debris in the fall after the tops have been killed by frost. Bulbs should be planted in well-drained soil and watered early in the day. This disease can also be minimized by avoiding overcrowding and wounding during cultivation. Sanitation is also very important. All equipment should be disinfested between use with 10% household bleach, 70% alcohol, or one of the commercially available compounds.

Mosaic, virus.
Infected leaves are mottled light and dark green. Plants can appear dwarfed and the leaves may be shorter than normal. Affected leaves may also be twisted. Few flowers are produced and buds may be deformed or fail to open. The disease is persistent in the bulbs and the virus is transmitted from plant to plant by aphids, especially in situations where plants are crowded and heavily infested.

It is very helpful to rogue and destroy infected plants and bulbs since this helps to minimize spread of the virus. Control of the aphid vectors is also important.

Leaf scorch, physiological.
The tips of leaves appear scorched, first turning yellow, then brown. Symptoms often first appear on the lower leaves and progress up the stem. This disease is common on rapidly forced lilies growing under conditions of wet soil and is rarely a problem in field-grown plants.

This disease can be minimized by careful attention to nutrition and watering.

Bulb mite, Rhizoglyphus echinopus.
This mite injures lily, as well as nearly all kinds of bulbs. Easter lily plants in greenhouses have been severely injured. The mites breed continuously in greenhouses or wherever the temperature and moisture are sufficiently high, so 10 or more generations may mature in a year. When the conditions become unfavorable to the mite, such as lack of food or moisture, a resistant stage called a hypopus is formed. It is adapted for migration to fresh food supplies.

The control measures are: burn all soft and decayed bulbs, if allowed; store bulbs at about 35º F. Heat treat bulbs before storage. See Bulbs, bulb fly.

Lily aphids, Macrosiphum lilii and Myzus circumflexus.
Two common aphids occur on the undersides of the leaves of various species of lily. They may be managed by spraying with insecticidal soap or ultra-fine horticultural oil, which are among the compounds registered for control of this pest in Connecticut. Aphids outdoors can be controlled using malathion sprays or imidacloprid can be applied as a soil drench for season-long, systemic control. Consult the labels for dosage rates and safety precautions. 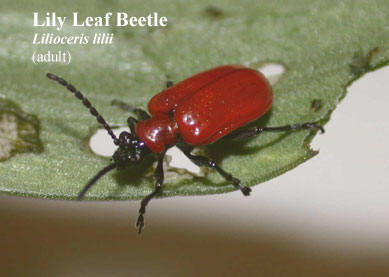 Lily leaf beetle, Lilioceris lilii.
This leaf-feeding beetle is a relatively new pest to New England and Connecticut. Help is needed in keeping this pest from spreading further west and south. The 1/4 to 3/8" long adult beetle has red wingcovers with black legs, head, antennae and body. Adults have a defense mechanism of squeaking when they are lightly squeezed.
Adults and larger larvae feed on leaves, stems, buds and flowers of all species of lilies, Fritillaria, Polygonatum, Solanum, Smilax, Nicotiana and other plants. However, this insect will only lay eggs on lily and some species of Fritillaria. Eggs are laid in a line on the undersides of leaves. They are reddish-orange and take from seven to 10 days to hatch. Larvae look like slugs and can be orange, brown, yellow or green in color with a black head. Larvae do the most damage to foliage. They carry their feces around on their backs: another defense mechanism. Larvae feed for 16-24 days before dropping to the ground to pupate. Adults emerge in 16-22 days and feed until cold weather when they find overwintering sites in the soil or plant litter nearby.

Handpicking can be effective in a small planting. Azadirachtin, which is among the compounds registered for use against this pest in Connecticut, will control small larvae and repel adults. Multiple applications are necessary. Imidacloprid applied as a systemic to be taken up by the roots may provide season-long control. Consult the label for dosage rates and safety precautions. Two parasites are being researched for biological control.

Mealy flata, Ormenis septentrionalis.
This is one of the largest of the lantern flies, which are sucking bugs. The eggs are laid in slits in the bark of stems and covered with masses of a white wax secretion. This insect is found on a great variety of herbaceous plants and shrubs. There is one annual generation and the adults are present in August and September. Although control measures are usually not necessary, the insect may be controlled by spraying with insecticidal soap or malathion, which are among the compounds registered for use against this pest in Connecticut. Imidacloprid may also be applied as a systemic to be taken up by the roots. Consult the label for dosage rates and safety precautions.

Stalk borer, Papaipema nebris.
This borer is occasionally found in lily. The larva tunnels up and down inside the stem, and the top portion usually wilts and later dies. As a rule its presence escapes notice until the plant begins to wilt. Then it is too late for the plant to recover. There is one generation each year. The moths emerge in September and October and lay eggs on the stalks of their food plants, in which stage the insect passes the winter. The eggs hatch in May or early June. The young larva begins to feed on the leaves of the nearest food plant, and later tunnels in the stem. The mature larva is nearly 1 1/2 inches in length, grayish brown with one white stripe on top and two white stripes on each side. On the front half of the body the lateral stripes are interrupted, and the lower brown stripe extends forward onto the side of the head.

Burning all the old stalks, if allowed, and destroying weeds at the edges of the garden helps to control this insect. When needed, methoxychlor, which is among the compounds registered for use against this pest in Connecticut, applied as a dust, in June, should control this pest. Consult the label for dosage rates and safety precautions.