Needle blight, Cladosporium spp.
European larch in the northeastern U.S. can be defoliated by a black-green fungus which has been identified only to genus. Tamarack are not infected.

Rake and dispose of fallen needles to reduce the chance of infection in the following season, and maintain vigor of the trees with adequate water during dry periods and fertilization in the spring.

Needle cast, Hypodermella laricis.
Needles of tamarack turn brown in spring or early summer and remain on the tree over the winter, which is contrary to the normal pattern of this species. Trees at a distance look scorched. Infected needles bear long, black fruiting bodies and eventually fall. This disease usually causes only localized damage.

Rake and dispose of fallen needles to reduce the chance of infection in the following season, and maintain vigor of the trees with adequate water during dry periods and fertilization in the spring. Since this disease is usually not a serious problem for the health of the trees, chemical controls are usually not necessary. 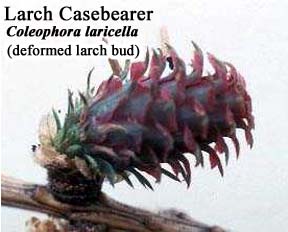 Larch casebearer, Coleophora laricella.
The larva of this minute insect is a miner in the leaves. It reaches a length of about 1/5" and is dark reddish brown with a black head. The adult is a small ash-gray moth having a wing expanse of 3/8" and bearing long fringe on the margins of the wings. The moths emerge late in May or early in June and lay eggs on the needles. The young larva bores its way into the needle and usually first tunnels out the tip portion, packing its excrement into the burrow in the mined leaf. By September, the entire needle has been mined and it cuts off the tip portion, cleans out the basal portion, and uses it as a winter case. Later, it fastens the case to a twig where it remains through the winter. In spring the larvae dislodge their cases and go to the buds and feed on the new needles. When they are fully-grown in May they pupate on the branches. In the following 2 to 3 weeks, the moths emerge. There is one generation each year. Spraying with malathion, which is among the compounds registered for use against this pest in Connecticut, when the needles are developing in the spring and again about June 1 may be helpful in controlling the larvae and moths. Imidacloprid applied as a systemic to be taken up by the roots should also be effective. Consult the label for dosage rates and safety precautions.

Larch sawfly, Pristophora erichsonii.
Larch needles are often eaten by the larvae of this insect, which are dull gray or olive green above, pale green beneath, and nearly 3/4" long when fully grown. There is probably one generation each year, and the larvae winter in their cocoons on the surface of the ground under the trees and pupate the following spring. The adults emerge in May, and the females cut into the new shoots to lay their eggs. The young larvae feed on the needles, at first cutting notches in the sides. The needles soon wither and turn brown. Later the insects devour the entire needle, and when abundant, strip the trees. The adults are black sawflies, the female being nearly 1/2" long and the male smaller. Carbaryl or spinosad, which are among the compounds registered for control of this pest in Connecticut, can be sprayed when caterpillars are present in damaging numbers. Consult the labels for dosage rates and safety precautions.

Larch woolly adelgid, Adelges laricis.
This adelgid feeds on the needles of larch. In summer, when the infestation is at its maximum, infested foliage often appears to be covered with snow. The insect's life history is complicated; some generations occur on larch and others form galls on spruce. An immature form overwinters on spruce and a different immature form winters on larch. This adelgid can be controlled on ornamental trees with a dormant horticultural oil spray in the spring or with an application of imidacloprid, which are among the compounds registered for control of this pest in Connecticut. Imidacloprid works best as a systemic to be taken up by the roots. Consult the labels for dosage rates and safety precautions.