Powdery mildew, Microsphaera penicillata.
Mildew appears as a gray mold on the undersides of leaves with a brownish tinge in patches. The upper side of the leaf remains green or becomes a purplish brown. Buds and new growth are occasionally deformed.

Powdery mildew can be minimized by improving air circulation around the plant. Chemical control is usually not necessary. However, fungicides can be applied as soon as symptoms are visible. Among the compounds registered for use in Connecticut are potassium bicarbonate, chlorothalonil, horticultural oil, and thiophanate-methyl. Consult the label for dosage rates and safety precautions.

Stem nematodes.
The stems of greenhouse hydrangeas are swollen and split. Leaves drop off.

Cutting potted plants back severely and repotting often removes the infested parts of the plant. Washing off all old soil from roots and putting plants into clean soil also reduces the chances of reinfestation. Only healthy plants should be purchased from reputable greenhouses.

Chlorosis.
Leaves yellow between the veins or sometimes the entire leaf is yellowed. It is thought to be due to too much time in the soil. It may also be correlated with very high levels of nitrates and calcium. Soil analysis is indicated.

Winter injury.
Winter hardiness problems are frequently encountered on hydrangeas (particularly Hydrangea macrophylla) growing away from the coast. This is often exhibited by lack of flowers. Since the flowers are set on previous season's growth, they are lost when shoots are killed by winter injury. This situation can be minimized by planting in sheltered locations.

The larvae of this weevil often injure hydrangea in nurseries and ornamental plantings by feeding on the roots. The small grubs devour the small roots and progress to chewing the bark from the larger roots, often girdling them. The tops of girdled plants first turn yellow, then brown, and the severely injured plants die. Large landscape plants tolerate root grazing quite well, but leaf notching by adults can be unsightly. The 1/2" long adult weevil is black, with a beaded appearance to the thorax and scattered spots of yellow hairs on the wing covers. Only females are known. Adults are flightless and feed nocturnally. The legless grub is white with a brown head and is curved like grubs of other weevils. Adults and large larvae overwinter, emerging from May - July. The adults have to feed for 3-4 weeks before being able to lay eggs. Treating the soil with insect pathogenic nematodes may control the larvae and should be the first line of defense for landscape plantings. Acephate and fluvalinate are among the compounds registered for control of this pest in Connecticut, and may be applied when there is adult feeding and before egg laying starts. The usual timing for these foliar sprays is during May, June and July at three week intervals. Insecticide resistance is very common; be aware that adults may appear to be dead following contact with fluvalinate, but may recover from poisoning within a few days. Consult the labels for dosage rates and safety precautions.

Cottony Camellia or Taxus Scale, Pulvinaria floccifera.
This soft scale attacks Euonymus, holly, Hydrangea, maple, Taxus and many other plants. The scale overwinters as a second instar mostly on twigs. Brown, oval females produce long white cottony egg masses on the undersides of host leaves in late spring. Crawler treatments should be applied after the eggs have hatched around mid-June, between 800 and 1400 degree days. Crawlers will disperse to new areas, insert their mouthparts, and begin to feed. Once settled, the young scales never move again. There is one generation per year. Black sooty mold grows on the honeydew that scales excrete as they feed. Horticultural oil can be applied during the dormant season. A summer rate of horticultural oil, along with deltamethrin, carbaryl or malathion, which are among the compounds registered for use against this insect in Connecticut, can be applied to foliage in late June against crawlers. Restricted-use imidacloprid can be applied by a licensed pesticide applicator in spring for season-long control, but should not be applied to plants, such as holly or certain cultivars of hydrangea, that are highly attractive to pollinators. An alternative systemic product containing acetamiprid may be considered for managing cottony scales on bee-attractive plants.

The fourlined plant bug, Poecilocapsus lineatus, and tarnished plant bug, Lygus lineolaris, lay eggs in soft stems. They hatch about the middle of May and the young bugs suck the sap from the tender leaves of hydrangea and many other plants. They molt five times and when mature, about the middle of June, they have wings and are nearly 1/3" long. The fourlined plant bug is yellow, marked lengthwise on the wings with four black stripes alternating with three green stripes. The injury to the leaves consists of sunken areas around the punctures. These areas later appear as circular transparent spots and finally as circular holes. The tarnished plant bug is mottled brownish, 1/5" long, with a yellow "Y" shape pattern on its back. There is one generation each year of the fourlined plant bug and two to five generations yearly of the tarnished plant bug. The nymphs can be managed by spraying with azadirachtin, ultrafine horticultural oil, insecticidal soap or malathion, which are among the compounds registered for control of this pest in Connecticut. Consult the labels for dosage rates and safety precautions. 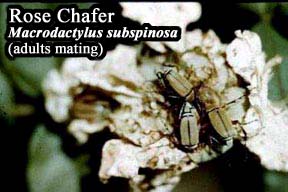 The rose chafer sometimes feeds on hydrangea. When very abundant, this insect injures roses and many other shrubs and trees by the beetles skeletonizing the leaves. They also cause injury to the flowers, particularly white flowers, by feeding upon the petals and soiling them with excrement. Rose chafers breed most abundantly in sandy waste land but often occur in lawns; they appear each year about June 10 to 12, and feed for about a month, though some of the beetles are present for 6 weeks. The females each lay from 24 to 36 eggs singly in the ground a few inches beneath the surface. They soon hatch and the young grubs feed upon the roots of grass and other plants, becoming full grown by late autumn when they go into the ground several inches to overwinter. The next April or May, they come near the surface and transform to pupae in earthen cells, and from 2 to 4 weeks later the beetles emerge. The adult beetle is yellowish grayish brown or clay colored and is a little over 1/3" (10-12 mm) long, with long sprawling legs. The larva is a white grub about 3/4" long when full grown. For control see Lawns, oriental beetle.