Canker, Thyronectria austroamericana.
Symptoms in native honeylocust include annual and perennial cankers on trunks and branches of all sizes. Trees or branches girdled by the cankers develop yellow or wilted foliage and die back. Cankers are elongated, depressed lesions. Yellow-brown lumps of fungal tissue emerge through the cankered tissue after it is dead, and produce spores that allow spread of the disease.

Removal and disposal of infected wood can reduce the chance of further infection. Maximizing the vigor of the trees with adequate water and with fertilizer in the spring can help the trees resist the pathogen. There are no effective chemical controls.

Rake and dispose of the fallen leaves to reduce the chance of infection in the following season. Since this disease is usually not a serious problem for the health of the trees, chemical controls are usually not necessary.

Honeylocust mite, Eotetranychus multidigituli.
This red-orange colored mite overwinters as adult females in bark crevices or under bud scales. In mid-June, eggs are laid on the undersides of young foliage. Foliage soon becomes covered with yellow spots and distorted as the nymphs feed on leaf cell contents. In warm weather, nymphs mature in as little as four days. Many generations occur each year.

Control can be achieved in several ways. Since nitrogen-rich foliage enhances mite populations, keeping nitrogen fertilization to a minimum should provide some control. There are predatory mites that attack this insect. Using ultrafine horticultural oil, which is among the compounds registered for control of this pest in Connecticut, to kill overwintering adults, eggs, and feeding nymphs, will conserve the predatory mites. Consult the label for the different rates needed for dormant use and safety precautions. Ultrafine oil can be effective at as low as 1/2% concentration during the summer, and when used at low rates is highly selective against pest mites.

Honeylocust plant bug, Diaphnocoris chlorionis.
This true bug overwinters as eggs hidden in bark crevices of two- to three-year-old limbs. Eggs hatch after the leaf buds begin to open. Nymphs crawl to new, still curled, foliage and begin feeding on plant sap. The tender foliage is killed by the penetration of the insects' stylets. Foliage becomes badly distorted and may fall prematurely. Branch tips may dieback. Approximately 30 days are required for nymphs to develop into adults. Eggs are laid soon after adults appear. There is one generation a year.

When needed, apply insecticidal soap or ultrafine horticultural oil, which are among the compounds registered for control of this pest in Connecticut, as needed in late April, making sure to penetrate the curled foliage. Imidacloprid, applied as a systemic to be taken up by the roots, will also provide season-long control. Consult the labels for dosage rates and safety precautions. 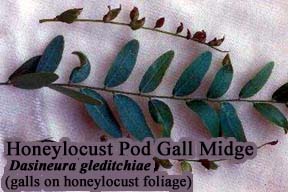 Honeylocust pod gall midge, Dasineura gleditschiae.
This tiny fly or midge overwinters as an adult. When new growth begins, the female lays eggs in the young leaflets. Larvae hatch in one or two days and begin feeding. Their feeding causes the leaflet to become a pod-like gall that frequently dries up and drops prematurely. Small branches may die back but new shoots grow from the base of the dead twig. Larvae are 1/4" long when mature and pupate within the galls. Many generations occur in a year.

Control involves several methods. Avoid planting 'Sunburst,' which is particularly susceptible. Carbaryl or spinosad, which are among the compounds registered for control of this pest in Connecticut, can be sprayed on the foliage in mid-May. Consult the labels for dosage rates and safety precautions.