Plant Health Problems
See Houseplants for a detailed discussion of other problems that may occur on hibiscus.

Botrytis blight or Gray mold, Botrytis cinerea.
This disease is an occasional problem, especially when the plant is in flower. Infected flowers develop tan, papery patches and are often covered with gray, fuzzy masses. Senescing flowers are particularly susceptible. Tan to brown spots with a target-like appearance can also develop on the leaves. These patches are often associated with flowers which have dropped onto the leaf surface.

Good sanitation practices including grooming the plants and removing spent or senescing flowers can minimize the potential for infection. These affected tissues should be carefully removed and discarded when they are dry. It is also important to avoid wetting the flowers when watering and crowding plants. Adequate spacing between the plants can promote good air circulation. Control can also be achieved with the use of fungicide sprays applied as soon as symptoms are visible. Among the compounds registered for use in Connecticut are potassium bicarbonate, mancozeb, copper hydroxide, and thiophanate-methyl. Consult the label for dosage rates, safety precautions, and indoor use.

Aphids, Aphis craccivora.
This black insect with white legs, and A. gossypii, usually a dark green color, feed on sap of hibiscus leaves and blossom buds. When control is needed, ultrafine horticultural oil, insecticidal soap or malathion, which are among the compounds registered for use against this pest in Connecticut, are useful. Imidacloprid, applied as a soil drench, will provide season-long systemic control. Consult the label for dosage rates and safety precautions.

Corn earworm, Helicoverpa zea.
Although usually a pest of corn, the caterpillars sometimes injure flowering plants, including hibiscus. The moths, with a wingspread of about 1.5 inches, are tan with darker markings. They arrive in Connecticut each season from more southern areas after which they lay eggs singly. Caterpillars reach a length of up to 2" and vary greatly in color from brown, tan, green, or pink with light and dark longitudinal stripes. The head is golden brown and the body has small bumps and spines, giving it a rough texture. There can be two or three generations in a year, depending on when the adults arrive on winds from the south. Bacillus thuringiensis var. kurstaki (Bt) is registered for control of this pest in Connecticut. Consult the label for dosage rates, safety precautions, and preharvest intervals. 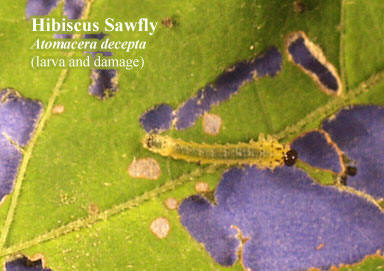 Hibiscus Sawfly, Atomacera decepta.
Larvae of this bee and wasp relative feed on rose mallow, rose of sharon, hollyhock and other mallows.  Winged adults, 3/16” long, are black with an orange thorax. Eggs are laid in leaf tissue near the margin at the tip.  Dark-headed larvae are yellowish-green and well camouflaged on foliage.  They have transverse rows of short, black tubular glands on the top of each body segment and six pairs of short fleshy prolegs.  They feed on the undersides of foliage leaving the epidermis intact.  As larvae get larger, all leaf tissue except the veins is consumed giving the leaf a lacy appearance.  Mature larvae, slightly less than 3/8” long, form straw-colored cocoons on the lower stems of host plants or in the soil.  Since larvae often feed together, cocoons can also be found in groups.  With large infestations the accumulation of small black fecal droppings is apparent.  In Connecticut multiple generations have been observed which can result in plants being completely defoliated.

Handpicking is difficult initially because of the small size of the larvae.  In Connecticut, products containing acephate, azadirachtin, horticultural oil, insecticidal soap, pyrethrins, permethrins, and spinosad that have sawflies and ornamentals on the label, can be used against this pest.  Spray must cover all infested plant parts for good control.  Products containing imidacloprid can be applied as a soil drench early in the season.  It is important to note that Bacillus thurengiensis (B.t.) products will not be effective against this pest because it is not a butterfly or moth larvae.  Do not apply foliar insecticides while bees or hummingbirds are present. Consult the label for dosage rates and safety precautions.

Japanese beetle, Popillia japonica.
This beetle, in the adult stage, feeds upon a great variety of trees and plants, including hibiscus. The beetle is 1/2" long, bright, shining green, with copper colored wing covers. Two white spots on the tip of the abdomen show beyond the ends of the wing covers, and there are five white spots formed by patches of white hairs on each side of the abdomen. The beetles begin emerging in late June but their greatest abundance is usually about the middle of July. During drought periods populations of Japanese beetle are drastically reduced.

Japanese beetle traps containing floral and sex attractant lures are readily available at home and garden centers. These traps may help reduce the overall number of beetles. However, beetles often land and feed on plants close to traps, so traps should be placed well away from valued plantings. Feeding on hibiscus foliage can be prevented by using sprays of acephate, azadirachtin, carbaryl or malathion, which are among the products registered for use against this pest in Connecticut. Imidacloprid, applied early in the season as a soil drench, will provide season-long systemic control. Consult the labels for dosage rates and safety precautions. Larvae develop in turf, so treatment of lawn areas should reduce the numbers of beetles. See Lawns, oriental beetle.

Whiteflies, Trialeurodes vaporariorum.
The greenhouse whitefly, Trialeurodes vaporariorum, the sweetpotato whitefly, Bemisia tabaci, and silverleaf whitefly, Bemisia argentifolii, commonly infest hibiscus, as well as many other kinds of plants, under glass and are often carried into the outdoors where they may persist. The life cycles of these species are similar. The tiny, white moth-like adult has a mealy appearance due to the small particles of wax that it secretes. It lays groups of eggs on the underside of leaves. The eggs hatch into small oval crawlers, which then settle down and become scale-like nymphs that suck sap from stationary locations on the leaves. These then spend about 4 days in an immobile pupal stage before becoming adults. About 5 weeks are required to complete the life cycle in the greenhouse.

Yellow sticky traps are an effective way to monitor indoor populations of whiteflies, and may even be attractive enough to reduce minor infestations. Biological controls can also be effective against whiteflies, especially in a greenhouse environment. The predatory ladybeetle, Delphastus pusillus, specializes in whiteflies and feeds on all three whitefly species. The parasitoid, Encarsia formosa, can control the greenhouse whitefly, but not the other species, in the greenhouse. Another parasitoid, Eretmocerus californicus, attacks all three species and can assist in controlling minor infestations in the greenhouse. Insecticidal soap, azadirachtin, fenoxycarb, or ultrafine horticultural oil, which are among the compounds registered for control of this pest in Connecticut, sprayed on the undersides of leaves, can be used against whiteflies in the greenhouse or outdoors. When applied at a low, half-percent concentration, soap is selectively toxic to whiteflies rather than parasitic wasps. Repeat applications of sprays will probably be needed because some stages in the life cycle are not affected by insecticides or other sprays. Consult the labels for dosage rates and safety precautions. Chemical control using conventional insecticides is difficult because of widespread insecticide resistance.