Tip blight, Botrytis sp.
New growth curls and dies and may be covered with a gray mold of the fruiting stage of the fungus during prolonged cool wet springs. A change in weather conditions will stop the ravages of this fungus.

Control of this disease is usually not necessary since affected tips frequently drop off and new healthy growth appears when weather conditions improve.

Phomopsis twig blight, Diaporthe conorum.
Needles turn brown and fall from affected twigs. The wood is dead, and small black fruiting bodies of the causal fungus may be found on the twigs. Another fungus, Myxasporium abietinus, may also be found under similar circumstances. These fungi are usually found on trees growing under unfavorable conditions.

Pruning and removal of infected twigs removes the source of future trouble.

Needle rusts: Hemlock-blueberry, Pucciniastruin myrtilli; Hemlock-hydrangea, Pucciniastrum hydrangeae; Hemlock-poplar, Melampsora abietis-canadensis.
Symptoms of infection vary but include the presence of pustules or tubes on needles. These break open to reveal the rusty-colored spores for which these diseases get their name. Alternate hosts are listed under the name of each type of rust.

Control is best effected by removal of alternate host or by planting alternate hosts that are resistant to rust, thereby breaking the life cycle.

Basal canker, caused by flooded conditions.
When hemlocks are planted on very wet sites, a brown, oozing canker may form at the base of the plant. Cankers are unsightly, and will allow entry of other pathogens and insects that may be harmful.

This malady is prevented by planting only on well-drained sites and avoiding excessive irrigation.

Poor growth of hemlock may be avoided by careful selection of the planting site.

Hemlock rust mites, Nalepella tsugifoliae.
This pest is an eriophyid mite that feeds openly on the hemlock foliage. Foliage turns from the normal dark green to yellow particularly in the spring. They differ from spider mites in that they are extremely small, their size can be measured in micrometers, cigar-shaped and slow moving. Rust mites overwinter as adults in bark cracks near foliage. Thorough coverage with ultrafine horticultural oil or insecticidal soap, which are among the compounds registered for control of this pest in Connecticut, will reduce the population. 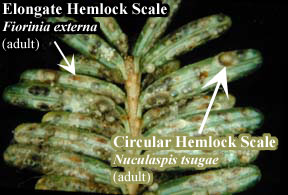 Hemlock scales, Fiorinia externa and Nuculaspis tsugae.  Two armored scales introduced from Japan are pests of hemlock in forests and ornamental plantings in the eastern United States. The elongate hemlock scale, Fiorinia externa, has two generations per year in the Mid-Atlantic States, but usually only one in New England. Its life stages are broadly overlapping so crawlers can be found throughout the spring and summer. This species is much more common than the circular hemlock scale, Nuculaspis tsugae, which completes two generations wherever it occurs. It is not uncommon to find both scales feeding together on the undersides of the needles. Their feeding causes foliage to turn yellow and drop prematurely and trees to die within about ten years. Control of these scales is not possible in forests, but both can be controlled in ornamental plantings with a dormant horticultural oil spray in the spring or ultrafine horticultural oil applied during the growing season. Peak scale crawler activity can be determined by monitoring with double-sided tape. The crawler population can be suppressed with sprays containing insecticidal soap, ultrafine horticultural oil, or acephate, which are among the compounds registered for control of this pest in Connecticut. Consult the labels for dosage rates and safety precautions.

Hemlock woolly adelgid, Adelges tsugae.
This insect, also of Japanese origin, is a destructive pest of Carolina and eastern hemlock in forests and ornamental plantings from North Carolina to southern New England. This adelgid feeds on the young twigs near where needles are attached and completes two generations per year. Feeding kills buds and causes foliage to desiccate; trees often die within five years. This adelgid cannot be controlled in forests. Ornamental plantings can be saved by applying a dormant horticultural oil spray in the spring or by using imidacloprid, which are among the compounds registered for control of this pest in Connecticut, as a systemic to be taken up by the roots. Consult the labels for dosage rates and safety precautions.

Spruce spider mite, Oligonychus ununguis.
Considerable injury is caused each season to conifers in ornamental plantings by the spruce spider mite, which feeds on the needles and webs them like twospotted spider mites. The trees take on a faded grayish or rusty brown appearance. Ultrafine horticultural oil, which is among the compounds registered for use against this pest in Connecticut, sprayed during the dormant season will control the overwintering eggs. During the growing season, horticultural oil at a low rate (1/2 to 1%) effectively suppresses spider mites while not eliminating beneficial predatory mites. Other effective products include hexythiazox and abamectin, of which the latter is a restricted use product. Consult the labels for dosage rates and safety precautions.