Gray blight, Botrytis cinerea.
New growth is suddenly killed and a gray fuzzy mass of the fungus covers the dead needles during prolonged cool wet weather. This disease is usually not a serious problem since it only affects the new, emerging shoots. After the tips die, new shoots are usually initiated from dormant or adventitious buds and mask the damage.

Since this disease is not very serious, controls are usually not necessary. However, it is helpful to maintain the vigor of the tree by following sound cultural practices. Steps to improve air circulation and overcrowding are also effective.

Needlecast diseases, Isthmiella, Lirula.
Needles affected by these fungi first turn yellow and then brown the spring following infection. Infected needles may drop or may persist on the tree. In most cases, infective spores of the fungi are discharged in midsummer. Although some defoliation may occur, these diseases are generally not considered to be serious.

Pruning and removing heavily infected twigs or branches will reduce the amount of the fungus available for infection. Attention to spacing, air circulation, and avoiding extended periods of wetness are also helpful to reduce the chance of infection. Although not usually necessary, fungicide sprays can be applied in midsummer. Among the compounds registered for use in Connecticut are mancozeb, thiophanate-methyl, Bordeaux mixture, and sulfur. Consult the label for dosage rates and safety precautions.

Needle rusts, Melampsoraceae.
There are a number of needle rust fungi that infect true firs. Some of these fungi require alternate hosts in order to complete their life cycles. Some of these are blueberries, willows, and several ferns. The orange-yellow or white stages of these rusts appear on the upper or lower surfaces of the needles. In most cases, needle rusts result in limited damage to the tree.

Control is usually effectively achieved by removal of the alternate host and by improving air circulation around the tree. Since these diseases generally result in limited damage, chemical controls are usually not necessary. However, fungicide sprays can be applied when new growth emerges in the spring and repeated until needles are fully expanded. Among the compounds registered for use in Connecticut are triadimefon, Bordeaux mixture, and sulfur. Consult the label for dosage rates and safety precautions. 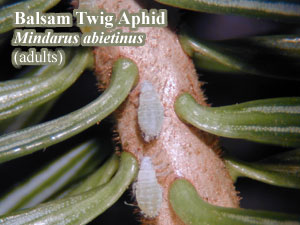 Balsam twig aphid, Mindarus abietinus.
This waxy aphid feeds on shoots of fir, causing the needles to twist. Severe infestations may kill twigs. Spraying with acephate or horticultural oil, which are among the compounds registered for use against this pest in Connecticut, should provide control. Imidacloprid applied as a systemic to be taken up by the roots is also effective. Consult the label for dosage rates and safety precautions.

Balsam fir bark beetle, Pityokteines sparsus.
Stressed and healthy trees may be attacked by the balsam bark beetle, which causes a bleeding of the sap from the trunk of the tree and ultimate reddening of the needles and dieback of the upper parts of the tree. This 1/10" beetle has long yellow hairs arising at the front of the head and forward edge of the pronotum. Maintaining adequate irrigation for these trees should prevent successful infestation. Pruning and burning the affected parts, if allowed, may help to prevent further infestations.

Spruce budworm, Choristoneura fumiferana.
This insect also feeds on balsam fir, which is sometimes more severely injured than spruce. This insect has caused severe injury to spruce and balsam fir in northern forests several times during the last 60 years. The young caterpillars feed on the needles of the new growth of the terminal shoots and those of the preceding season, usually webbing these needles together and eating them off at the base. The webs holding the severed needles and bud scales give the trees a sickly appearance and in fact weaken the trees to such an extent that they become prone to bark beetles and other secondary pests. At maturity the caterpillars are about 3/4" long, and dark brown, bearing cream-colored tubercles. The adult moths have a wing spread of about 3/4", and are brown, marked with gray and white spots. They are most abundant in June and July and the females lay clusters of pale-green flat eggs on the needles. These eggs hatch in 10 days, and the caterpillars overwinter in a partially grown condition. There is one generation each year. Mixed stands with reduced percentage of balsam fir are recommended for forest planting. Sprays of spinosad or Bacillus thuringiensis var. kurstaki, which are among the compounds registered for use against this pest in Connecticut, can be used to control this caterpillar. Consult the labels for dosage rates and safety precautions.

Spruce spider mite, Oligonychus ununguis.
This mite infests nearly all kinds of conifers including fir. Considerable injury is caused each season to conifers in ornamental plantings by the spruce spider mite, which feeds on the needles and webs them like twospotted spider mites. The trees take on a faded grayish or rusty brown appearance. Ultrafine horticultural oil, which is among the compounds registered for use against this pest in Connecticut, sprayed during the dormant season will control the overwintering eggs, while the same material applied during the growing season at a low rate (1/2 to 1%) effectively suppresses spider mites while not eliminating beneficial predatory mites. Abamectin or hexythiazox are effective restricted use products. Consult the label for dosage rates and safety precautions.