Anthracnose, Discula destructiva.
A brown spot with a purple border appears on leaves in early summer. The purple border of the spot may be surrounded by a yellow halo. Small black fruiting bodies are sometimes found in the centers of these spots. Anthracnose may also be expressed as a twig blight, when the fungus grows from infected leaves and into the twigs. Infected twigs turn black and may, under humid conditions, ooze spores of the fungus. Anthracnose may also occur as a bract blight, with pink to reddish spots forming on infected bracts. Bracts generally fall off soon after infection, and so are relatively inconsequential in terms of the overall disease. The native flowering dogwood, C. florida, is much more susceptible to anthracnose than is Kousa dogwood, C. kousa, or hybrids of C. florida and C. kousa.

Control can be achieved by raking and removing fallen leaves in autumn and by pruning of symptomatic twigs or branches. Additionally, the use of fungicide sprays can be effective when applied early in the spring when new leaves are expanding. An additional fungicide application can also be made when the buds are forming in late summer and early fall. Among the compounds registered for use in Connecticut are copper hydroxide, mancozeb, chlorothalonil, and thiophanate-methyl. Consult the label for dosage rates and safety precautions.

Spot anthracnose, Elsinoe corni.
Small round purple dots are characteristic of this fungus. This disease may be severe in years with cool wet springtime conditions.

Management of this disease can be achieved by raking and removing fallen leaves in autumn. Chemical control is usually not necessary. However, fungicide sprays can be applied when new growth appears in spring. Several applications may be necessary during periods of extended wet weather. Among the compounds registered for use in Connecticut are copper hydroxide, mancozeb, chlorothalonil, and thiophanate-methyl. Consult the label for dosage rates and safety precautions.

Bleeding canker, Phytophthora cactorum.
A generally unthrifty appearance of the tree may be the first sign of infection by this fungus. It shows as a sunken area in the bark from which may ooze a reddish-brown fluid. The bark eventually sloughs off revealing wood with blue-black or reddish-brown streaks below. Twigs and branches on the side of the tree above the canker die first, but the entire tree will die when the canker has girdled the trunk.

Removal of infected trees and replacement with non-susceptible species is recommended.

Powdery mildew, Microsphaera pulchra.
White, powdery mycelium of the fungus covers the leaves, giving the tree a gray appearance. Premature leaf senescence and defoliation may follow. Severe, yearly defoliation will adversely affect the health of the tree. Red-flowering cultivars of dogwood are most susceptible. This disease is favored by hot humid weather.

Powdery mildew can be minimized by improving air circulation around the tree by pruning and thinning. Chemical control is usually not necessary. However, fungicide sprays can be applied as soon as symptoms are detected. Among the compounds registered for use in Connecticut are potassium bicarbonate, chlorothalonil, horticultural oil, thiophanate-methyl, and triadimefon. Consult the label for dosage rates and safety precautions.

Dogwoods benefit from thorough watering during dry spells, and mulch will hold water for the tree. In addition, avoid planting other plants around the base of the tree that will compete for water.

Cottony maple scale, Pulvinaria innumerabilis.
This insect occasionally infests the leaves of flowering dogwood. This is a brown, oval, soft scale on the bark of the branches of silver and red maple in winter, but in June the large egg masses are formed, and their wax covering resembles a tuft of cotton. The young crawl in July and some of them live for a time on the leaves, but return to the twigs to pass the winter.

Among the compounds registered for use against this pest in Connecticut are horticultural oil, imidacloprid, and malathion. The best means of control are a dormant horticultural oil spray applied in early spring or imidacloprid applied as a systemic to be taken up by the roots. Malathion sprays in early July will control the young crawlers. Consult the labels for dosage rates and safety precautions.

Dogwood borer, Synanthedon scitula.
The larva of this clearwing moth bores under the edges of the bark of flowering dogwood, particularly around wounds. The larva is white with a pale brown head. The adult moth has a wingspread of about an inch; the wings are transparent with blue-black margins, the thorax and abdomen are blue-black, with narrow yellow rings on the second and fourth abdominal segments. Both the dogwood borer and the flatheaded borer deposit eggs in cracks in the bark.

Avoiding mechanical injury reduces the chances of infestation. Newly set trees should be well irrigated to avoid transplant shock, and should be sprayed with permethrin, which is among the compounds registered for use against this pest in Connecticut, to prevent egg laying by adult moths. Keep trees growing vigorously. Kousa dogwood may have some resistance to this pest. Permethrin sprayed on the trunk and lower branches the end of May or beginning of June should control the adults as they emerge and lay eggs. Consult the label for dosage rates and safety precautions. 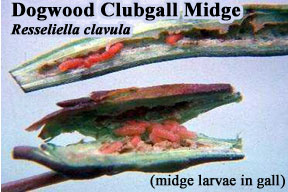 Dogwood clubgall midge, Resseliella clavula.
This is a tubular swelling containing one or more larvae occurring on the small twigs, often killing them back for several inches. The larvae overwinter on the ground protected by sod or plant debris. The tiny adult fly or gall midge emerges in June. Eggs are deposited in the terminal leaves. Newly hatched larvae tunnel down the petiole toward the developing stem. Once in the stem, tissue begins to grow around the maggot, forming a gall from 3/8 - 2" long. Prune and destroy affected branches during the season to limit the population for the following season.

Dogwood twig borer, Oberea tripunctata.
The larva of one of the small longhorned beetles is a borer in the terminal twigs of several species of dogwood. The eggs are laid in June and July and hatch in about 10 days. The young larvae tunnel downward in the twig, making several openings through the bark so frass may be thrown out. The twig is girdled above and below where the egg was deposited. The winter is passed in the burrow by the full grown larva and pupation takes place in the spring. There is apparently one generation each year. Cutting and burning the infested twigs will help control this insect.

Dogwood sawfly, Macremphytus tarsatus.
Larvae of this sawfly overwinter in dead wood. Adults emerge from late May through July. As many as 100 eggs are laid on the undersides of leaves. The larvae feed together skeletonizing the leaf. As they grow, their larger mouthparts are able to chew through all layers of the leaf, finally leaving only the midvein. Second stage larvae become covered with a white powder-like material. The final stage, 1" long caterpillar, is yellowish with rows of black spots. There is one generation per year.

Among the compounds registered for control of this pest in Connecticut are acephate, spinosad and imidacloprid. Acephate or spinosad can be applied in July to control larvae. Imidacloprid, applied as a soil drench early in the season, provides systemic, season-long control. Consult the label for dosage rates and safety precautions.

Flatheaded borer, Chrysobothris femorata.
Eggs are deposited on the bark, and the larvae make irregular tunnels under the bark. When feeding is completed, they bore into the wood to pupate. The larvae are white with a flat head and about an inch long when fully grown. The adult is a wedge-shaped metallic colored beetle about 1/2" long. For control, see dogwood borer above.

Lecanium scale or Terrapin scale, Mesolecanium nigrofasciatum.
This small, reddish, oval, convex scale occurs on the small twigs of dogwood. It varies from 1/16 - 1/8" long and is usually reddish-brown mottled with black. Eggs are deposited in June under the old shells and there is one generation each year. Among the compounds registered for control of this pest in Connecticut are horticultural oil, malathion and imidacloprid. Horticultural oil may be applied in early spring, or use a spray of malathion in April. Imidacloprid may also be applied as a systemic to be taken up by the roots and may provide more than one year of control. Consult the labels for dosage rates and safety precautions.

Mulberry whitefly, Tetraleurodes mori.
This whitefly was named from the mulberry, presumably because mulberry leaves are commonly infested and a favorite host, although the insect occurs on many other kinds of trees and shrubs. The oval nymphs or larvae occur on the undersides of the leaves, and are dark brown or black, fringed with marginal white wax. The wings of the adult are white, spotted with red and brownish black. Usually, control measures are not needed. Imidacloprid, which is registered for use against this pest in Connecticut, can be applied to the soil as a systemic. Consult the label for dosage rates and safety precautions.

Oystershell scale, Lepidosaphes ulmi.
Heavy infestations of the oystershell scale reduce tree vigor because the scales suck water and nutrients from the tree. These insects sometimes kill limbs or entire trees. Eggs overwinter under their mother scale on the bark of trees. Crawlers hatch in late spring and settle on the bark, usually 2-3 weeks after bloom. They insert their mouthparts and then form a waxy coating over their bodies. As they grow, they assume an oystershell-like shape, becoming elongate with one end enlarged. The gray scales mature late in the summer, and at that time, the females lay eggs under their waxy covers.

Applying horticultural oil in late winter may suffocate eggs and in late May should kill crawlers. To determine when crawlers are active, wrap black tape around infested limbs and coat the tape with Vaseline. The light-colored crawlers are easily seen on the tape.

Large infestations of the San Jose scale can cause branch and even tree death. Partially-grown scales overwinter under their circular gray covering or scale on the twigs and the branches of trees. They begin to feed as the sap starts to flow. When apple trees bloom, the males emerge from under their scales to mate with the immobile females. Females are circular and cone-shaped, and their circular scales are about 1/16" in diameter, with a raised center or nipple. The males are smaller and elongate, with the nipple not centered on the scale. Females give live birth to tiny bright yellow crawlers in June. The young crawlers quickly settle, insert their long mouthparts into the twigs, and then suck sap from branches. As they grow, the crawlers secrete a waxy filament that becomes their scale or covering. Scales apparently have 2 generations per year, with the first in June and the second in August. Scales may be controlled by applying horticultural oil in the spring or as a dormant spray. Apply diazinon, which is among the compounds registered for control of this pest in Connecticut, to kill crawlers. Consult the labels for dosage rates and safety precautions. To detect the yellow crawlers, wrap black tape coated with Vaseline around small branches. Adult flights may be detected with pheromone traps.