Root and crown rot, Rhizoctonia solani, Pythium spp., Fusarium spp.
Symptoms appear as wilting and a slow or rapid collapse of the plant. The roots can appear brown and water-soaked instead of white. A water-soaked lesion can often appear at the base of the stem.

Control can be achieved by using a two-year rotation with nonsusceptible plants, such as corn, to prevent the buildup of pathogenic organisms in the soil.

Leaf blight, Alternaria dauci.
Leaf blight is caused by a fungus and starts on the foliage as dark brown spots which grow together and may kill whole leaves. If the disease is very severe, the whole carrot top may be killed. This fungus disease usually attacks the older foliage.

Ordinarily, carrots in Connecticut do not require spraying for the control of this disease. In wet seasons, however, carrot foliage may be protected by spraying with compounds. Thorough spray coverage is essential for control. Control can be achieved with the use of fungicide sprays applied as soon as symptoms are visible. Among the compounds registered for use in Connecticut are chlorothalonil, mancozeb, and iprodione. Consult the label for dosage rates and safety precautions.

To keep down the amount of disease, growers should control leaf hoppers with insecticides and avoid planting carrots near asters.

Root-knot nematodes, Meloidogyne hapla.
Infected plants are stunted and sickly, with knots on their small feeding roots. This disease is caused by nematodes which can persist in the soil for years.

Rotation with nonsusceptible plants, such as corn, can reduce the number of nematodes in the soil. Growing carrots in a new area will also control the disease. Care should be taken to avoid carrying any soil from the old site to the new site.

Aster leafhopper, Macrosteles quadrilineatus.
Although this leafhopper causes little direct injury, it is important because it carries the pathogen causing aster yellows disease on carrots, other vegetable crops and ornamental plants. The adult leafhoppers are about 1/8" long and are light grayish-green or greenish-yellow in color. They can be distinguished from other leafhoppers by the six dark lines on the face. There are carrot varieties that are relatively resistant to aster yellows disease, including Royal Chantenay, Scarlet Nantes, El Presidente, Charger, Six Pack, Amtou, Toudo, and Gold King. Vegetable variety availability changes frequently, however. Row covers can be used to exclude leafhoppers from the crop. Carbaryl and malathion are among the compounds registered for control of this pest in Connecticut. Consult the label for dosage rates, safety precautions, and preharvest intervals. 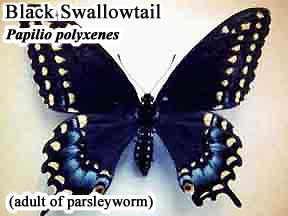 Black swallowtail, Papilio polyxenes.
This caterpillar is occasionally found on carrot, parsley, dill, fennel, celery, and other cultivated or wild members of the carrot family. The caterpillars are about 2" long when fully grown, and green with a yellow spotted black lateral band on each segment. The adult is the common large black swallowtail butterfly with a wingspread of almost 4". It has two nearly parallel rows of yellow spots on the outer margins of the wings and other light blue areas on the rear wings. This insect overwinters as a tan colored chrysalis and there are two generations each year. They rarely require control other than hand picking.

Carrot rust fly, Psila rosae.
This slender fly, 1/4" long, with a metallic blue-black body emerges from overwintering as a pupa in mid-May. It lays eggs in the soil close to the plant late in May, and the young maggots work their way downward along the root and begin feeding at the tip of the root. Older larvae tunnel in the lower third of the main root. The burrows are rusty brown in color, which explains the name. The maggots pupate in the soil and there are two generations of the fly each season. First generation maggots feed from June to July and the second generation from late August into September.