See Houseplants for a detailed discussion of the other common problems that occur on cactus.

Erwinia blight, Erwinia spp.
Affected tissues first appear as small circular, water-soaked spots. As the bacterium spreads, the spots enlarge and develop a blackened, slimy, wet appearance. Tissues can crack and ooze a brown liquid. When the lesions girdle the base of the plant, the plant wilts, collapses, and decays.

If the spots are recognized at an early stage, affected areas can be excised with a sharp, clean knife. Infected parts can also be removed as soon as they are evident. However, once the main stem has been invaded, recovery is unlikely. Careful watering to avoid splashing helps to minimize spread of the bacterium.

Corky scab, physiological.
Many species of cactus develop irregular spots or patches with a corky brown appearance. In most cases, these spots are superficial and don't penetrate beyond the epidermis. However, shoots can sometimes be covered with many scabs and appear unsightly. When cracks develop in the corky tissues, the epidermis can break open and curl.

This problem is usually not serious but can be prevented by manipulating light and relative humidity levels. 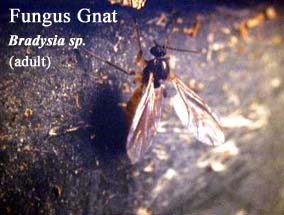 Fungus gnats, Sciarid spp.
Cactus is particularly sensitive to injury from fungus gnats. Fungus gnats are dainty, mosquito-like flies that breed in moist organic matter. The larval stage grows to 1/2", is clear, slime covered, and has a small black head capsule. Larvae feed on fungi, root hairs, larger roots and underground stems. Plants especially susceptible to injury include cacti and poinsettias, in which larvae will feed internally in the plant above the soil level. Adults can be seen swarming near the soil if the population is large, and can become a major household or greenhouse nuisance. A soil drench of Bacillus thuringiensis var. israeliensis or dimilin which are registered for use against this pest in Connecticut, will control the larvae. Steinernema feltiae nematodes are also effective. Read and follow all label directions. Avoid using incompletely composted ingredients when formulating potting media.