Plant Health Problems
Cabbage is the most common member of the Crucifer family. See Crucifers for a detailed discussion of the common diseases of this host. 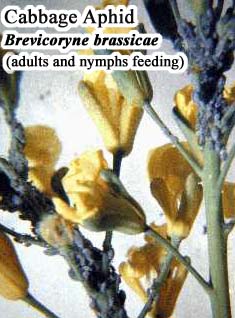 Cabbage aphid, Brevicoryne brassicae.
This whitish, powdery aphid occurs in dense clusters on the leaves where it feeds on plant sap. The leaves of infested plants crinkle and curl, growth is retarded and dwarfed heads are produced. There may be as many as 16 generations in a season. The aphid overwinters as glossy, black eggs on the leaves and stems of old plants remaining in the field. See Aphid fact sheet.

Cabbage looper, Trichoplusia ni.
This caterpillar, which humps its back or loops when it crawls, usually feeds on leaves but also burrows into the cabbage head, especially in cool weather. It is light green and striped lengthwise with white and darker green. Its body is nearly smooth and is narrowest at the head. The adult is a grayish-brown moth with a small silvery spot resembling a figure 8, near the middle of each forewing. It flies at night when it deposits small round greenish-white eggs, singly on the leaf surface. This species does not overwinter in Connecticut, but migrates up from the south in some years. Among the compounds registered for control of this pest in Connecticut are Bacillus thuringiensis var. kurstaki (Bt) and var. aizawai, carbaryl, and spinosad. A higher rate of Bt may be needed than is used against the imported cabbageworm, and Bt will be more effective when both the days and nights are warm. For either insecticide, consult the label for dosage rates, safety precautions, and preharvest intervals.

Cabbage maggot, Delia radicum.
This insect infests the stems of early set cabbage and other crucifers. As a rule, late-planted cabbage is not injured, but late radish and turnip may be damaged. The white maggots infest the stems just below the surface of the soil and infested cabbage and cauliflower plants may wilt and die without forming heads. The gray flies, which look like small houseflies, appear about the middle of May and the females lay eggs on the surface of the soil near the stem of the plant. There are three generations each year and the insect overwinters as pupae in the soil.

As mentioned above, planting after the end of May is often enough to reduce damage to cabbage and cole crops where the edible product is above the ground. Covering plants with spun-bonded row cover or other fine-mesh material can keep the adult flies from being able to lay eggs on the plants. Be careful to rotate the planting away from ground where plants in the cabbage family have been grown before, and bury the edges of the cover thoroughly. Because the eggs are laid within a few inches of the plant, barriers of tar paper or old carpet padding used to cover the soil around the base of each plant can prevent infestation. The barrier (6-10 inches in diameter, with a hole for the stem in the center and a slit so that it can be slid around the plant) must be fit carefully to prevent the fly from getting underneath, but not restrict the growth of the stem. Beneficial nematodes, Steinernema feltiae, which attack the maggots in the soil, are also available. Diazinon is registered for control of cabbage maggots in Connecticut. To be effective, the chemical must be applied to the soil at the time of planting. Consult the label for dosage rates, safety precautions, and preharvest intervals. When wilting or other damage is visible, it is already too late.

Cross-striped cabbageworm, Evergestis rimosalis.
This caterpillar is about 4/5" long when fully grown and bluish gray with tiny black stripes across the top of the body. This insect is not common, but can be damaging on a single plant or in a small garden. The eggs are laid in masses of 20-30, so there may be large numbers of caterpillars on one plant. They prefer to feed on young leaves and terminal buds. Bacillus thuringiensis var. kurstaki and spinosad are registered for control of this pest in Connecticut. Consult the label for dosage rates, safety precautions, and preharvest intervals.

Diamondback moth, Plutella xylostella.
Although usually a minor pest, at times this insect can damage cabbage and related plants by mining in and eating small holes through the outer leaves. The larvae are pale green and only about a quarter inch long when full grown. They are very active, and when disturbed, wriggle and drop to the ground. The pupa is enclosed in an openwork net attached to the leaves and overwinters in this stage. The adult is a small gray moth with light yellow rear margins on the forewings. It has a wingspread of 5/8".

The diamondback moth is usually kept under control by its many effective natural enemies, except when insecticides have eliminated the enemies or in unusually hot weather. Among the compounds registered for control of this pest in Connecticut are spinosad and formulations of Bacillus thuringiensis var. kurstaki (Bt), although populations of caterpillars resistant to Bt are occasionally brought up from the southern U.S. on infested seedlings for transplant. These larvae may be sensitive to Bt var. aizawai. Consult the label for dosage rates, safety precautions, and preharvest intervals. 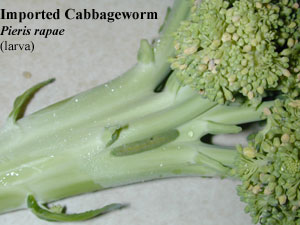 Imported cabbageworm, Pieris rapae.
The cabbageworm is velvety and bright green in color and is about an inch long when mature. It eats large holes in the outer leaves, and as it grows, it often moves toward the center of the plant and may feed directly on the cabbage heads. This caterpillar is the larva of the white butterfly that is common around cabbage fields. The butterfly has a wingspread of about 1.75" and is white with a tinge of sulfur yellow. The tips of the forewing are gray, and the male bears one and the female two black spots on each forewing. The eggs are yellow and are laid singly on the under surface of the leaves. See Imported Cabbageworm fact sheet.

Purplebacked cabbageworm, Evergestis pallidata.
This caterpillar is about 3/4 inch long when mature, bristly and with the body tapering at both ends. The back is purplish-brown, the underside green and there is a yellow stripe running along each side. It sometimes feeds on leaves, webbing them together, or bores into the stem and roots. There are 2-3 generations per year and the late generation is most damaging. This insect is rare, however, and control is not usually necessary.

Zebra caterpillar, Melanchra picta.
This black caterpillar with bright yellow markings is a general feeder, being found on nearly all kinds of vegetables as well as many flowering plants. It is about two inches long when full grown. The moth is reddish brown and without prominent markings. The rear wings are nearly white with brown margins. There are two generations each year. Like the cross-striped caterpillar, this insect is not common, but large numbers of caterpillars may be found on a single plant.