Leaf and twig blight, Volutella buxi.
Leaves and twigs die back in late summer. Pink masses of spores may be found on the underside of the pale tan leaves or bursting through bark of infected twigs. Leaf casting may also be caused by two other fungi which can infect twigs.

Control can be achieved with the use of fungicides applied as soon as symptoms are visible. Among the compounds registered for use in Connecticut are Bordeaux mixture, ferbam, and mancozeb. Consult the label for dosage rates and safety precautions. If wood is affected, pruning well back of diseased area and periodic removal of all dead leaves and twigs is important and may make it unnecessary to spray.

Winter injury.
Severe cold and drying winds of late winter may produce a burning on exposed boxwoods. Leaves may become grayish-green or brown with dead twigs.

Protection from exposure, as well as care to let the season's growth harden off before winter (which may well mean not applying too much fertilizer), has been found very helpful. In addition, heavy snow falling onto the plant, as from overhanging eaves of a house or overhanging branches of another tree, will cause the branches to spread out, causing minute breaks in the bark. Most plants will recover after the snow melts, but secondary pathogens may gain entry through the small breaks. Removal of heavy snows will maintain the shape and overall health of the plant. For more information, see the fact sheet on Winter Injury on Woody Ornamentals.

Bronzing.
Foliage may appear bronze from causes other than red spider mites. This has been attributed to root-lesion nematodes, hot sun, winter burning, and nutritional unbalance.

Bronzing.
Foliage may appear bronze from causes other than European red mite. This has been attributed to root-lesion nematodes, hot sun, winter burning, and nutritional imbalance. Laboratory examination of roots is suggested. Boxwoods usually grow out of this trouble. 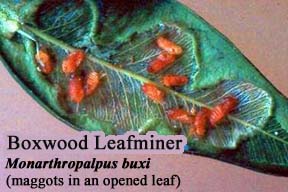 Boxwood leafminer, Monarthropalpus flavus.
This is the most serious insect pest of boxwood in Connecticut. The adult fly lays eggs in the leaves in June. The larvae live in the leaves, between the upper and lower epidermal layers, usually several in each leaf, but they do not devour the green tissue as do most leaf miners. Certain whitish spots, along with leaves that are somewhat blistered and distorted, are the only external indication that the leaves are infested. Among the compounds registered for control of this pest in Connecticut are malathion, fluvalinate, imidacloprid and acephate. When needed, a malathion, or fluvalinate spray applied during the first two weeks of June give good control of this pest. Imidacloprid, applied as a soil drench, gives season-long, systemic control. Acephate can be applied during the season and will kill the larvae in the mines. Consult the label for dosage rates and safety precautions. 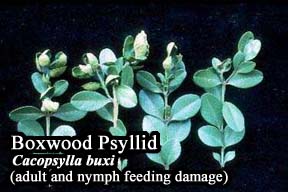 Boxwood psyllids, Cacopsylla buxi.
These jumping plant lice, in both adult and nymphal stages, infest boxwood and suck the sap. They overwinter as young nymphs under the bud scales. The young feed in the spring and adults appear in May. Eggs are laid at the base of the buds. Feeding punctures cause a cupping of the terminal leaves. There is only one generation a year.

Insecticidal soap, which is among the compounds registered for control of this pest in Connecticut, applied in late May has been effective against psyllids. Consult the label for dosage rates and safety precautions. English boxwood is somewhat resistant.

Mites, Tetranychus telarius and Eurytetranychus buxi.
These mites may injure ornamental boxwoods, especially in hot, dry seasons. The first species varies in color from pale yellow to purplish red with conspicuous dark spots. The other mite is green to yellowish brown. Injured foliage appears blanched or silvery. Some webbing is noticeable.

Among the compounds registered for control of this pest in Connecticut are ultrafine horticultural oil, insecticidal soap and malathion. Ultra-fine horticultural oil used as a dormant or summer spray gives good control for this pest. Insecticidal soap has also controlled these mites. Abamectin is an effective, restricted use product. Apply according to label directions.

Oystershell scale, Lepidosaphes ulmi.
This scale sometimes occurs on boxwood. Heavy infestations of the oystershell scale reduce shrub vigor because the scales suck water and nutrients. These insects sometimes kill branches or entire shrubs. Eggs overwinter under their mother scale on the bark. Crawlers hatch in late spring and settle on the bark, usually in early June. They insert their mouthparts and then form a waxy coating over their bodies. As they grow, they assume an oystershell-like shape, becoming elongate with one end enlarged. The gray scales mature late in the summer, and at that time, the females lay eggs under their waxy covers. Applying horticultural oil or diazinon, which are among the compounds registered for control of this insect in Connecticut, may kill crawlers. Consult the labels for dosage rates and safety precautions. To determine when crawlers are active, wrap black tape around infested branches and coat the tape with Vaseline. The light-colored crawlers are easily seen on the tape.