Wilt, Verticillium albo-atrum.
Yellowing of the leaves and wilting of shoots or entire plants is followed by eventual death. Brownish discoloration of water-conducting tissues in wood is characteristic. The causal fungus is soilborne and often infects a plant through cultivator injuries. If barberry plants have died of wilt, replacements should be planted elsewhere.

No control is known. It is advisable to avoid root injury in transplanting and cultivation.

Rust, Puccinia graminis.
This fungus shows as bright orange pustules on the underside of the barberry leaves in early summer. The alternate host is wheat and Merion bluegrass. Many of the ornamental barberries are resistant to rust. Eradication of barberries for protection of wheat and bluegrass was mandated in the past.

Control of rust on barberry is not usually warranted.

Barberry aphid, Rhopalosiphum berberidis.
This small yellowish-green aphid is often very abundant on the leaves and tender shoots, and sucks the sap. The dormant timing for horticultural oil sprays will control overwintering insects while conserving natural enemies. Among the compounds registered for control of this pest in Connecticut are insecticidal soap, malathion and imidacloprid. A thorough spraying with insecticidal soap or malathion when aphids are first noticed will give control. Imidacloprid applied as a soil drench, gives season-long, systemic control. Consult the label for dosage rates and safety precautions.

Barberry webworm, Omphalocera dentosa.
Blackish whitespotted caterpillars occasionally make webs on the twigs and devour the leaves. The adult is a grayish brown moth with about a 2" wing spread that belongs to the family Pyralidae (snout moths). Control is rarely needed. In the event of an infestation, apply Bacillus thuringiensis var. kurstaki, or spinosad, which are among the compounds registered for control of this pest in Connecticut, to young caterpillars. Consult the label for dosage rates and safety precautions.

Twobanded Japanese weevil, Callirhopalus bifasciatus.
The weevils, which consist of only females, feed on the margins of the leaves of azalea, barberry, rhododendron and other shrubs, leaving characteristic crescent-shaped notches. The weevil is about 1/5" long, robust, and varied brown in color. The wing covers have faint whitish lines and whitish spots on the apex. Spray acephate, which is registered for control of this pest in Connecticut, in early August if many adults are noticed and damage is intolerable. Consult the label for dosage rates and safety precautions. 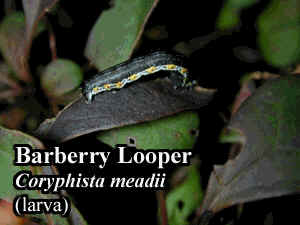 Barberry Looper, Coryphista meadii
An infrequent pest of barberry and Oregon Grapeholly, this inchworm overwinters as a pupa buried in the soil. Brownish-gray moths with a 1.5" wingspan emerge in May. After mating, females lay eggs singly on upper or lower leaf surfaces. Larvae hatch in 3 – 4 days, are gray-black with lateral white stripes just above the prolegs and begin to skeletonize leaves at night. At maturity, in 14 days, 1" long larvae can eat all leaf parts. Dropping to the soil, they burrow in and pupate. There are multiple generations per year in Connecticut. In the home landscape control measures are generally not needed. Among the compounds registered for control of this pest in Connecticut are horticultural oil, Bacillus thurengiensis and spinosad. In outbreak conditions nurseries may use horticultural oil and Bacillus thurengiensis when caterpillars are small.