Fusarium crown and root rot, Fusarium oxysporum f. sp. asparagi and Fusarium proliferatum.
The disease can appear during the summer after the ferns have developed. Plants become stunted and individual stems will exhibit a lemon-yellow color in the fern and then wilt and die after a few days. Entire crowns can succumb and leave large misses in the row. The fungi are soilborne and seedborne.

Although all cultivars can become diseased, the all-male hybrids show considerable vigor and tolerance to the disease. The disease can be suppressed by improving soil pH (optimum pH = 7.0), controlling weeds and insects, and irrigating during periods of drought. Older fields in Connecticut have responded to a dressing of NaCl (2 lbs./20 ft.) applied once in the spring. New plantings should use the vigorous all-male hybrid cultivars. Pesticides are not effective for control of this disease.

Rust, Puccinia asparagi.
This disease is caused by a fungus and appears as dusty reddish-brown spots on the leaves and stems. Later these spots take on a darker appearance and become more firm. In Connecticut, this disease has not been severe since rust-resistant cultivars were developed. When it does appear, it usually occurs too late in the season to cause much damage.

If the disease appears during the growing season, it may become necessary to spray with compounds. Control can also be achieved with the use of fungicide sprays applied as soon as symptoms are visible. Among the compounds registered for use in Connecticut is mancozeb. Consult the label for dosage rates and safety precautions.

Purple spot, Pleospora herbarum.
The disease is caused by a fungus and appears on the ferns as tan to brown lesions with dark purple margins. As the lesions coalesce, the fern needles begin to drop off and cause defoliation. On the spear, the disease causes small (1-2 mm) elliptical purplish spots which can lower marketability. Lesions usually appear on one side due to the wounding effect of wind-driven sand.

Burial or removal of the previous year's fern growth lowers the inoculum and reduces the severity of purple spot. Cover crop mulches and wind barriers that reduce blowing sand can reduce the disease. Control can also be achieved with the use of fungicide sprays applied as soon as symptoms are visible. Among the compounds registered for use in Connecticut is chlorothalonil. Consult the label for dosage rates and safety precautions.

If frost is imminent, all spears should be harvested beforehand. Do not compensate for the lost yield by extending the harvest season.

Fasciation disease.
An abiotic disease that causes the stem to flatten and become grossly distorted. This disorder is a genetic mutation and will not spread.

Cut and discard the stem at its base to prevent insects from feeding and reproducing on the stem.

Asparagus aphid, Brachycorynella asparagi.
This blue-gray aphid overwinters as eggs on fern residue left in the field. When the eggs hatch, the aphids feed on spears and then the fern. Aphid feeding causes a bushy "witch's broom" growth and a blue-green color to the fern. When present in large numbers, these aphids can damage or kill the plants. For more detail on control measures, see Aphid fact sheet.

Asparagus miner, Ophiomyia simplex.
This miner tunnels near the base of the stem and just beneath the epidermis. The resulting brown streaks in the stalk near the base of the plant may affect commercial salability, but do not greatly affect plant health. High miner populations were once believed to cause yellowing of the foliage, but this is now known to usually be caused by Fusarium diseases. Some of the mines start a foot or more above the soil and the miners work downward, often beneath the soil surface. The adult resembles a house fly, but is only 1/10" long. Adults emerge during the first week in June, and there are two generations each season. The insect passes the winter in the burrow, in the form of a pupa resembling a flax seed. Pulling and destroying old stalks in late fall will destroy overwintering puparia. Four parasites, Dacnusa rondani, D. bathyzona, Sphegigaster spp. and Pleurotropis epigonus, help to restrain miner populations. Chemical control is not usually necessary. 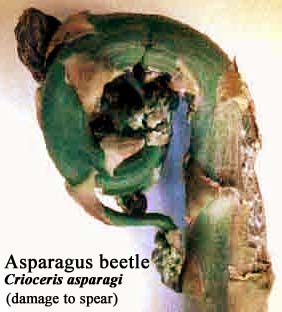 Common asparagus beetle, Crioceris asparagi.
This is a bluish-black beetle with three cream-colored spots and an orange outer margin and tip on each wing cover. The thorax is reddish and usually bears two black spots. This beetle is about 1/4" long and hibernates under rubbish, bark of trees, or similar situations where it can find shelter. Emerging from winter quarters at the time the shoots appear, the beetles eat the tender shoots, often causing considerable injury. The females lay eggs on the shoots early in the season and on the leaves and flower stems later. The larvae that hatch from the eggs are gray with black legs and head. They can damage the shoots near the end of the cutting season and also feed on the leaves and the epidermis of the stalks. New plantings and new ferns produced just after harvest should be protected as defoliation weakens the plants. Cutting the shoots very cleanly just below ground level every 1-2 days during the harvest season will remove many of the eggs before the larvae can hatch. A tiny parasitic wasp, Tetrastichus asparagi (1/16 inch long and metallic green), also destroys many of the beetle eggs and larvae. Among the compounds registered for use to control this pest in Connecticut are rotenone, pyrethrum, carbaryl or malathion. Consult the label for dosage rates, safety precautions, and during the cutting season, be sure to observe the required interval between an insecticide application and resuming the harvest.