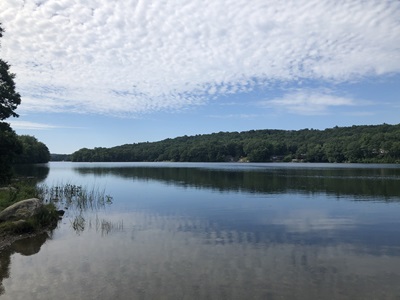 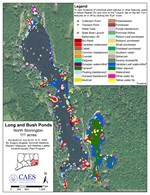 Long and Bush Ponds are located in North Stonington and Ledyard, CT, connected by a culvert under Lantern Hill Road. Together, they are 111 acres. There is a state boat launch on the northeast side of Long Pond. The speed limit on the waterbody is 5 MPH, and no water-skiing is allowed.
This was the first survey of Long and Bush Ponds performed by CAES IAPP. We found 27 aquatic plant species. There were three invasive species: Eurasian watermilfoil (Myriophyllum spicatum), fanwort (Cabomba caroliniana), and variable-leaf watermilfoil (Myriophyllum heterophyllum). These three invasive species are among the most abundant plants in the ponds.
Long Pond is vegetated along almost the entire shoreline, with densely vegetated coves in the northern and southern ends, as well as the middle of the pond on both sides. Fanwort and variable-leaf watermilfoil were common throughout the pond. Common native species included southern naiad (Najas guadalupensis), coontail (Ceratophyllum demersum), floating bladderwort (Utricularia radiata), and purple bladderwort (Utricularia purpurea). Water lilies were common in the coves: white water lily (Nymphaea odorata), watershield (Brasenia schreberi), and yellow water lily (Nuphar variegata).
Bush Pond is almost entirely covered in invasive fanwort with an abundance of variable-leaf watermilfoil. Native species are also present in the pond, but in less abundance and mostly confined to the area around the culvert. Overall, Long and Bush Ponds have a large presence of invasive aquatic plant species, but also have very diverse native plant life.