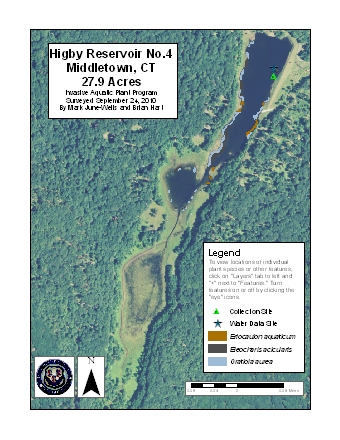 Higby Reservoir #4 is a 28-acre reservoir located in There is an outflow at the southern tip of the lake. There are three other reservoirs in the area. The water level during the 2010 survey was very low.  An estimated half of the bottom surface was exposed. Three plants were found during the survey, none of which were invasive. Golden hedge-hyssop (Gratiola aurea) was the most prominent plant species. It was found in varying sizes along the western shore, in the southern cove, and along the middle of the eastern shore. Needle spikerush (Eleocharis acicularis) occurred in narrow small to medium patches along the western shore line and sporadically in the southern cove. Sevenangle pipewort (Eriocaulon aquaticum) was found in two patches along the middle of the western shore and sporadically along the eastern shore.