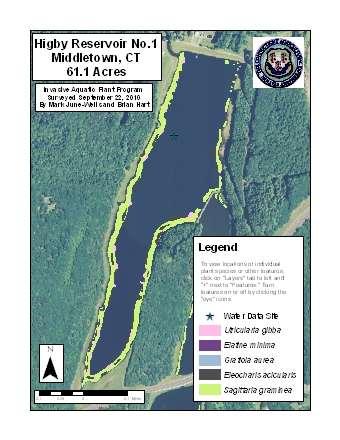 The 2010 survey revealed the presence of five plants, none of which are invasive. Grassy arrowhead (Sagittaria graminea) can be found around the entire lake. The western, southern, and lower eastern coasts have the most dense presence of the plant. Smaller patches are found in the northeast corner. The next most common plant was needle spikerush (Eleocharis acicularis). It was found in small to medium patches around the perimeter of the lake. Humped bladderwort (Utricularia gibba) was the third most common plant and was found in small patches sporadically around the perimeter. Four patches of small waterwort (Elatine minima) were found. It was only present along the eastern coast. The least frequent plant found was golden hedge-hyssop (Gratiola aurea). One small patch was found in the north east corner.