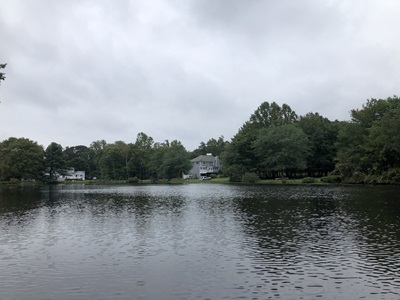 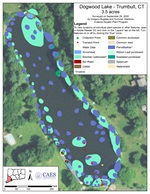 Dogwood Lake is a 3.5-acre waterbody in Trumbull, Connecticut. It is a town lake with public access on Teeter Rock Road. The lake is relatively shallow with a maximum depth of six feet.

The CAES IAPP found 11 aquatic plant species in the lake. Two species are invasive: Brazilian waterweed (Egeria densa) and parrotfeather (Myriophyllum aquaticum). Both species are relatively rare in Connecticut. Brazilian waterweed is found in 3 other lakes in the state; parrotfeather is found in 4. Common reed, also known as phragmites, was found on the lake as well. This species is invasive, but is considered a wetland plant, so it is not counted as invasive in our survey.

Unfortunately, much of the lake is occupied by the two invasive species: Brazilian waterweed and parrotfeather. Almost the entire shoreline contained these two species, and they were also present throughout the middle of the lake. With only 8 native species, it is not considered very diverse. Most native species were found in the northeastern and southwestern corners of the lake.