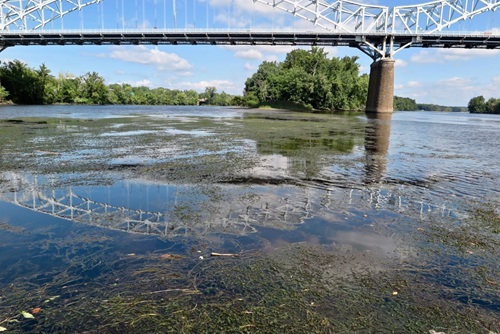 Hydrilla (Hydrilla verticillata) is the most troublesome invasive aquatic plant in Florida and many other southern states. It forms dense stands that crowd out native vegetation, destroy fisheries, limit recreation, impede navigation and reduce property values. Following reports of this plant occurring in the southern portion of the Connecticut River, an investigative task force led by the Connecticut Agricultural Experiment Station Invasive Aquatic Plant Program (CAES IAPP) was formed. Comprising over 30 experts from throughout the northeast, the task force surveyed the river from central Vermont to southern Connecticut in 2018. The Connecticut portion of the river was presumed to be “ground zero” for the infestation and received the majority of the effort. Above is a photo from Middletown, CT courtesy of Judy Preston. Helping the CAES IAPP staff in the State were volunteers from CT Sea Grant, Lower Connecticut River Council of Governments, Silvio Conte Wildlife Refuge, US Coast Guard, US Fish and Wildlife Service, and Vermont Department of Environmental Conservation.

No hydrilla was reported in the New Hampshire and Vermont portions of the river. The northernmost sighting of hydrilla was in Agawam, MA, near Six Flags and the Connecticut border. Travelling south from the Connecticut/Massachusetts border, hydrilla became common. Portions of the river and its coves from Hartford to East Haddam were alarming choked with the weed. Although hydrilla was found along the shore, the densest beds occurred on shallow shoals and in protected coves.  In some coves, hydrilla spread out over the surface making access by survey boat impossible.

Finding such dense stands this far north of the southern states is alarming. CAES IAPP has found small populations in Coventry Lake, Held Pond in Weston, and two small ponds in Mystic but these do not compare to the extensive areas in the CT River. Furthermore, the CT River hydrilla is far more robust than that seen elsewhere in the State. This robustness could be a result of river flow, nutrients or genetics. Hydrilla samples have undergone DNA analysis and the results indicate the CT River population is genetically different from plants found in other parts of North America.

Controlling hydrilla is extremely difficult as it spreads by propagules called turions and tubers that fall to the sediment and remain viable for many years. Fragments also spread the plant, and the CT surveyors witnessed large quantities of hydrilla fragments floating downstream. Of great concern is the potential for propagules to be transported by boat trailering and wildfowl to nearby lakes and ponds.  Another concern is the cost of hydrilla management. Coventry Lake is currently using a management strategy including aquatic herbicides costing in excess of $100,000 per year. CAES is working closely with the Northeast Aquatic Nuisance Species Panel and other stakeholders to find management strategies.

Below are survey maps from the 2018 season. They are listed from northernmost sections to southernmost. The name is the person who lead the survey at each location.