Insect of the Week

In late June of 2001, there was an outbreak of the armyworm, Pseudaletia unipuncta (Haw.). The first recorded major outbreak in Connecticut was in 1790. Subsequent outbreaks occurred in 1896 and 1914. The most recent one was in 1937. Widespread outbreaks have occurred simultaneously in both the United States and Canada irregularly at 7 – 20 year intervals. The most recent major outbreak on the North American continent was in 1954, but there was little or no effect in Connecticut.  Our first recorded inquiry of this current outbreak was received on June 25, 2001. Since then, the armyworm has been reported from at least 44 Connecticut towns.

The primary food plants of the armyworm include grasses, millet, oats, corn and rice. They will also feed on barley, oats, rye and wheat. In addition to various grasses, the armyworm is known to feed on the foliage of bean, cucumber, parsley, pepper, strawberry, sweet potato, cabbage and potato.

The feeding period for the caterpillar (worm, larva) stage of the armyworm lasts for 24 – 38 days (approximately 3 to 5½ weeks). After the caterpillar has finished eating, it pupates (transforms into a non-feeding pre-adult state called a pupa). Prior to pupating, the caterpillar finds a hiding place under clumps of grass or burrows down to a depth of 2 inches in the soil and then pupates. The armyworm remains as a pupa for 2 – 3 weeks, at which time it emerges into the adult moth. The adults mate at night soon after emerging and do not cause damage to plants. Females begin laying eggs within 4 – 14 days after emergence.

Adult moths were found on Monday July 16, 2001, in a light trap located at our Lockwood Farm in Hamden, CT. The expectation is that there will be a second generation of armyworm caterpillars this year. It is quite possible that larvae will begin to hatch as early as the week of July 23, 2001. We do not know with certainty if the damage caused by caterpillars will be as severe as the first generation. Historically it has not. A large number of the caterpillars from this current outbreak has been attacked by a variety of natural enemies; among these have been parasitic flies and wasps, a disease causing virus, and birds.

Pesticides, such as bifenthrin, carbaryl, chlorpyrifos, cyfluthrin, deltamethrin, diazinon, halofenozide, malathion, permethrin, and spinosad, are labeled for the control of the armyworm. Bacillus thuringiensis (Dipel), a biological control, is labeled for use against 1st & 2nd instar larvae feeding on forage, corn and or alfalfa as well as turf. Several trade names include: Agree, Biobit, Javelin, Ketch, Lepinox, and Xen-Tari. Insect pathogenic nematodes include: Steinernema carpocapsae and Steinernema feltiae. Read the pesticide manufacturers' recommendations carefully before treating for the armyworm.  Any questions please call Gale Ridge at (203)-974-8600 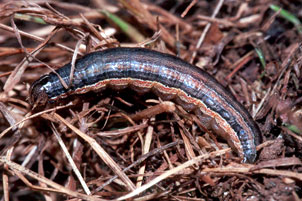