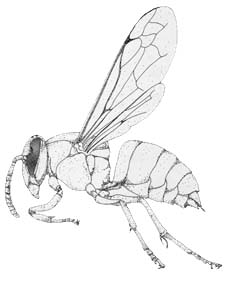 Yellowjackets are wasps in the family Vespidae. There are 325 species in North America. Most are black with yellow, brown or white markings. This family includes the yellowjackets, paper wasps, hornets, potter wasps, and mason wasps. Yellowjackets are social insects. Their colonies consist of three castes: queens, workers (sterile females) and males. The females can sting, while the males cannot.

The four most commonly encountered yellowjacket species in Connecticut are:

Biology
Development: In the spring, a young inseminated queen builds a small nest made of chewed up wood fiber (cellulose). Nests can occur beneath the soil surface in tree cavities and building walls. She makes 30 to 55 cells and then lays a single egg into each cell. After the eggs hatch, the queen feeds the developing larvae with nectar and insect prey. In approximately 30 days, the first 5 to 7 workers emerge and take over the work of gathering food and enlarging the nest. Subsequently, the queen just lays eggs.

Yellowjacket populations increase throughout the summer until they peak at 1,000 to 4,000 individuals, depending on the species. In the late summer, the social structure of the colony goes into decline as new queens and males are produced. Mating occurs during nuptial flights. After the flight, the newly fertilized queens seek hiding places to overwinter. All other members of the population are killed, either by a heavy frost or other natural causes. In the following spring, young queens establish new independent colonies and the life cycle is repeated as before. Nests are occupied for only one season.

Food: Yellowjackets are considered beneficial. As predators, they prey on many pest insects including blow flies, house flies and caterpillars. In one study, wasps in one colony collected 225 flies an hour. In another study, two wasps collected 20 grams of imported cabbage worms over three days.

Yellowjackets are not only predators, they are also scavengers. They collect various sweet and protein foods, as well as water, up to a mile from the nest. These insects forage as individuals and, unlike honey bees, do not communicate the location of a food source to other members of the colony. They locate food by means of olfactory or visual cues.

Suggestions on how to avoid attracting yellowjackets and being stung.

Medical treatment
Yellowjackets do not loose their stingers when they sting, honey bees do. The Connecticut Poison Control has suggested the following for yellowjacket (wasp) and honey bee stings:

First Aid: When the stinger is left behind, as in the case of honey bees, speed of removal is important. Use a credit card edge to flick out the stinger or use tweezers if they are available. Then cover the sting with a cold compress. Discomfort will last for an hour or so. Baking soda, meat tenderizer or other home remedies are less effective than a cold compress. After first aid has been administered, watch for serious allergic reactions. They may be:

If any of these symptoms are experienced, seek immediate medical attention. The Connecticut Poison Control hot line is 1 (800) 222-1222.

Control
If there is a yellowjacket problem, attempt to locate the nest. Common nesting sites are woodland edges, stonewalls, shrubbery, trees, the interior and exterior of buildings, leaf litter, debris and lawns. You may expedite locating nests by patiently watching for flight routes. Once a nest has been found, do not disturb the colony. Yellowjackets can become extremely aggressive if disturbed. Mark the nest location with a bright marker so that the nest can be easily found at night. Do not plug the access hole. Never treat the nest during the day. Insecticidal dusts of carbaryl (Sevin) or rotenone placed in and around the nest entrance at night can be effective. Other pesticides include pyrethrum, permethrin, tetramethrin, or resmethrin formulated as aerosols and baits containing carbaryl (Sevin) or encapsulated diazinon (Knoxout). Read the manufacturers’ recommendations carefully before treating the colony. In hard to reach nest locations, especially in buildings, consider calling in a professional for help.

Yellowjackets are common wasps found throughout the United States. They are considered beneficial insects and are both predators and scavengers. Wasps can become a problem in the summer months by stinging people. Knowing were nests are located and avoiding attraction of yellowjackets can reduce the incidence of stings.