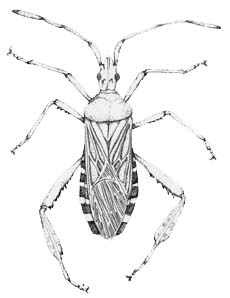 The Western conifer seed bug (Leptoglossus occidentalis) was first observed in Connecticut in 1985. Its original range was confined to the western third of North America along the Rocky Mountain chain. It was first identified in 1910 and has since, expanded its range eastward. The insect is a household nuisance because it has the habit of entering buildings to over winter as adults. When in a building, it will not feed or cause damage to fabrics, woods or any other articles within the home. It is simply using the home for shelter from cold weather.

Description
Females are larger than males. The average length is ¾ inch. The overall color of the insect is a warm reddish-brown. The wings lie flat on the back. Adults have a distinctive inverted white V marking towards the front of each wing. The small head orients forward and tapers to a point. Antennae are long. The hind legs are the largest of all the legs and have a distinctive tear drop shaped flare on one of the joints.

Biology and habits
The Western conifer seed bug feeds on the maturing cones and seeds of over 30 species of trees, including fir, pine, spruce, holly, arborvitae and pistachio.

The small barrel-shaped eggs are laid on the foliage in mid to late spring. They hatch after about 2 ½ weeks of development. The immature nymph then seeks out and feeds on maturing cones in tree tops throughout the summer. The insect goes through 5 stages or instars of development before becoming adults in late August.

As temperatures drop during the fall and early winter, the adults start to look for a dry over wintering location. In the wild, they aggregate under peeled bark and in bird and rodent nests. In these sheltered locations, they go into a state of torpor until spring when they become active again.

Control
The Western conifer seed bug is not considered a forest pest in Connecticut. However, it is a pest in nursery seed growing regions of western Canada and the United States because the insect feeds on seed endosperm. For the homeowner, it is a nuisance because it enters peoples’ homes. Preventing the adults from entering a building by caulking around windows, vents and attic areas will reduce household populations. If the insect is found inside the home, it is suggested that the insect be picked up and put outside. Killing the insect may result in an unpleasant odor. At this time, there is no available pesticide labeled for control of the Western conifer seed bug in New England because it is not considered an important pest.

The Western Conifer Seed bug is considered a forest pest. It feeds on the endosperm of maturing conifer seeds. During fall it migrates from host trees to seek shelter from the winter weather, often into buildings. This can make it a nuisance to homeowners. The insect was accidentally introduced to Connecticut during the mid-1980’s.