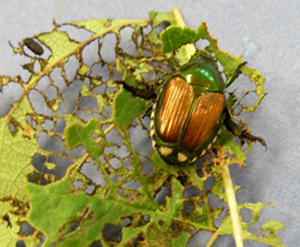 The Japanese beetle was accidentally introduced to the on the roots of nursery stock from brought in for the 1916 World’s Fair.  Lacking any natural enemies which kept it in check in , it quickly spread across the Eastern and states becoming a serious plant and agricultural pest.  Isolated populations are now found in and .  Other beetle pests with similar biology’s are Asiatic garden beetle, Oriental beetle, and the chafers also cause damage.

The adult Japanese beetle is ½ inch (10mm) long and metallic green with coppery-brown wing covers.  They have six small white patches of hairs along each side.  Males and females look alike except the males are a little smaller.

The Japanese beetle has a one year life cycle, 10 months as a white grub and 2 months as an adult.  It emerges from the soil as an adult in late June and is active through July and August.  The peak period is July.  Between feedings females drop to the ground, burrow down 3 inches and lay up to four eggs at a time.  This is repeated until 40-60 eggs have been laid.  Lawns that are well watered and cared for (with high nitrogen levels) are favored.  Adults can live into the fall up to first frosts.  After hatching, larvae (white grubs) feed on grass roots until nearly full grown in late fall; then they burrow 4 to 8 inches down into the soil to hibernate through the winter.  The following spring they return to the root zone of the lawn, feed and pupate before emerging as adults in late June.

Adult Japanese beetles feed on over 300 species of plants, chewing out tissue between the veins effectively skeletonizing the leaves.  They are gregarious and in high numbers can rapidly defoliate a plant.  They feed during the day and are very active in hot sunny weather.  Favorite foods are roses, fruit trees, beans, corn, tomatoes and numerous ornamental shrubs and plants.  The larvae feed on the roots of turf grasses, woody and herbaceous plants and organic matter in the soil.  Feeding can be so heavy that the turf separates from the soil and be lifted like a carpet.  Other beetle grub species can also cause considerable damage to ornamentals and turf.

The pesticides Diazinon and Dursban are no longer registered for residential use and are not available to homeowners for white grub control.

Numerous other compounds are available for Japanese beetle control.  Going to a good garden or agricultural center will provide you with many good choices.

In using any of these pesticides, be careful near water and check for environmental fate.  Always follow label directions.

Mention of a product or company is for informational purposes only and does not constitute an endorsement by the Connecticut Agricultural Experiment Station.