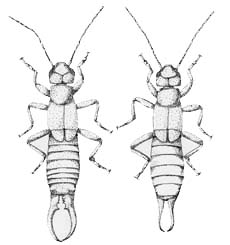 The European earwig, Forficula auricularia Linnaeus, is a common insect in Connecticut. Its name is derived from a European superstition that the insect will crawl into the ears of people as they sleep. This is not so. Despite the formidable appearance of caudal forceps/pincers, which are primarily used for courtship, the earwig is considered harmless to people.

Biology
An adult earwig is reddish brown and approximately ¾ inches long. It is elongate and flattened. The insect’s wings are folded under small wing pads on the thorax. It is a poor flyer. Females and males both have pincers pointing backwards from the last abdominal segment. The female pincers are smaller and less sickle shaped than those of the males.

The European earwig is cosmopolitan. It was first reported in the United States in Newport, Rhode Island during 1901. The insect is nocturnal, partly because it needs high humidity for survival. During the day, it seeks out moist locations for protection such as under logs, stones, mulch, bark or debris. In the home, it is commonly found where there is moisture in or around sinks, baths, showers, laundry, basement areas, garage and garbage. It feeds on insects and decaying or living vegetation. Earwigs can cause damage by feeding on healthy tissues of dahlias, zinnias, hollyhock, lettuce, strawberry, celery, potato, seedling beans, beets, corn, carrots, ornamental shrubs and some trees. They also have been observed raiding honey from honeybee hives.

Male and female European earwigs pair in the late fall. A chamber is excavated in the soil to provide the pair with an over wintering site. In late winter, the female lays her eggs and then drives the male from the chamber. The female earwig exhibits an instinct that is rare among insects, maternal care of the eggs and young. She will groom and turn the eggs much like a hen, frequently shifting their position. Once the eggs have hatched, she will guard her young and feed them until they have molted into the third stage. The young nymphs look like the adults, though smaller. During this period, the female does not eat, and may not feed for as long as 7 months. By May, the female and young have left the nest. Some females then produce a second brood, which hatch in late June. It takes approximately 56 days for a nymph to mature into an adult.

Control
Remove unessential mulch, plant debris and objects such as wooden boards and stones from around the exterior of the home. Prune away heavy foliage next to the house to allow for more light and air circulation. Drying out the foundation area can reduce earwig populations. A trap can be made out of two wooden boards with ¼ inch grooves cut into them. The two boards are then placed together with the groves aligned and placed in an area where earwigs are present. The grooves form a space into which the insects can crawl. Pesticides that are labeled for earwigs are chlorpyrifos (Dursban), bendiocarb (Ficam), diazinon, propoxur (Baygon), pyrethrins, diatomaceous earth dust, resmethrin or boric acid powder. Some of these pesticides may be applied in a 3-10 foot wide band around the home. Baits labeled for earwigs are also available. These baits are usually fish oil, mixed with bran and an insecticide. Indoor control is supplemental to outdoor management. If an earwig is seen inside the home, pick it up in a tissue and remove it. Avoid crushing the insect because it can give off an unpleasant odor. Read the pesticide manufacturers’ recommendations carefully before treating for earwigs.

The European earwig, Forficula auricularia, is a common insect in Connecticut. Despite the formidable appearance of forcep/pincers at the end of the abdomen, the earwig is considered harmless to people. These insects feed on decaying or living vegetation and can cause damage to flower heads.