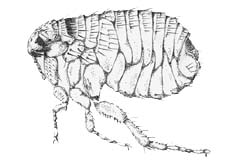 Fleas are small wingless insects. There are approximately 2,000 species worldwide. These insects, external parasites of birds and mammals, require blood meals from their hosts. The most common species in Connecticut is the cat flea, Ctenocephalides felis. A squirrel flea known as Orchopeas howardi (Baker), is an occasional pest in the home. Fleas cause discomfort by biting, but members of some species can transmit disease organisms.

Where to look
Fleas are found on the host, hiding in animal fur or bird feathers. They can also live off the host in protected microhabitats, such as bird nests, animal dens, or regularly used resting sites. These habitats can serve as breeding sites, as well as locations where household pets regularly frequent. Resting places and travel routes of feral animals also can be a source for fleas that ultimately show up in the home.

Description
Adult: Adult fleas are wingless and flattened laterally. Their coloration ranges from polished reddish brown to black. Numerous backward pointing bristles help as the insect moves forward through the host’s fur or feathers. Fleas are usually 1.5 mm to 4 mm long and have mouthparts for piercing and sucking. Antennae are short and inserted into grooves behind inconspicuous eyes. Large hind legs are designed for jumping.

Larva: Larvae have 13 segments and are without legs. They move by using setal rings and abdominal hooks located on the body segments. Their normal clear white coloration turns reddish after vertebrate blood (in the adult flea frass) is partially digested. The head capsule is well developed with chewing mouthparts and no eyes. Mature larvae are about twice as long as adult fleas (3 - 5.2mm).

Cocoon : Cocoons are comprised of silk and collected debris for camouflage.

Biology: The most common flea of modern western cosmopolitan areas is the cat flea, Ctenocephalides felis (Bouche). It is currently the most frequently used flea species in scientific study. Biological discussion in this section is about this species.

The cat flea C. felis is believed to have originated in Africa and is now worldwide in distribution. Adults start seeking a blood meal 48 hours after emerging from the cocoon. The adult flea usually lives for at least two to three weeks. Life expectancy is often not that long, because of the grooming habits of the host. After mating, the female lays dry eggs in the host’s fur. The eggs readily dislodge falling into the resting area underneath the animal and hatch after an incubation period of up to 21 days. Eggs will not hatch on the host.

Larvae ingest adult flea frass (feces), which contains 90% of the protein from the original blood meal. With incomplete utilization of host blood by the adult, the offspring benefit from a high protein food source. Larvae go through 3 instars (molts), before they spin a cocoon for pupation. Depending on temperature, availability of food, and humidity, the larval development can range from 1-2 weeks to several months.

Based on recent research, it has been observed that some cats are able to support more fleas than others. Grooming ability and physiology play an important role. It has been noticed that younger cats have more fleas than older animals. This might be due to acquired host resistance or better grooming habits of the older cats. An actively grooming cat can reduce the adult flea population by 50%.

Successful direct transfer from host to host by fleas is low. Female fleas tend to remain with their host. Males are more likely to cross directly between animals. The greatest number of flea transfers takes place in resting sites or dens.

Control
There are more fleas during the summer than during the winter because higher summer temperatures and humidity favor flea development. Optimal conditions are 27C-32C (80.6F-89.6F) with 75-92% relative humidity. Consequently, there is more need for flea control in the warmer months. One or more life stages of the cat flea can live in a home for several weeks, even when pets are not present.

Standard means for control on the pet: Restrict pet access to hard to reach places, such as crawl spaces, around the home. It is suggested that the pet be combed and bathed in EPA approved flea and tick shampoos regularly. Flea collars are also available.

Standard means of control off the pet: Wash bedding and vacuum regularly (especially along cracks and crevices). Spraying baseboards with insecticides is also effective. Pay particular attention to areas where the pet frequents. Steam clean carpets and upholstery if necessary.

The use of numerous chemicals for control such as the application of lufenuron (Program), imidacloprid (Advantage), fipronil (Frontline), Carbaryl, (Sevin), resmethrin, Methoxychlor and Malathion are available to citizens. Insect growth regulators available through veterinarians, such as Methoprene (Precor) and pyriproxyfen (Nylar, Archer, Biospot), also are effective.

The cat flea, Ctenocephalides felis, is a small wingless insect. The immatures are scavengers, while adults suck blood from mammals. The primary host is the cat. Fleas do not live on humans, though they can bite people in attempt to get a blood meal.