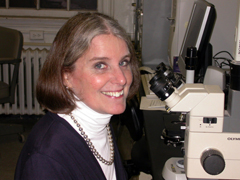 Department of Plant Pathology and Ecology

Dr. Douglas has expertise in detection, mitigation, and management of plant health problems. She also has expertise in physiological and genetic bases of host-pathogen interactions and the biology and epidemiology of phytoplasma-associated diseases, particularly X-disease of stone fruits.

Dr. Douglas was heavily involved in the Department of Plant Pathology and Ecology’s service efforts and focused on the diagnosis of plant health problems for all Connecticut residents, including homeowners, plant care professionals (e.g., arborists, landscapers, garden centers), and commercial growers (e.g., greenhouse, vegetable, nursery, orchard, and vineyard crops). She worked closely with stakeholders to develop disease management programs that required minimal use of pesticides and were compatible with the environment. She had an active outreach program, which included numerous fact sheets, web-based information, workshops, town meetings, and presentations for green industry professionals, garden and horticultural clubs, and students.

Dr. Douglas was the head of the Department from 2007 until her retirement in 2015. She directed scientists who conducted research on the biology and ecology of plant pathogens and interactions between plants, pathogens, and the environment. Department research included original, basic investigations involving the ecology and genetics of plant pathogens, new and emerging diseases, and models for predicting the spread of plant pathogens. The mission of the department was to manage plant health problems using innovative methods to protect the environment, ensure a safe food supply, and maintain a healthy landscape for Connecticut. Additionally, Dr. Douglas supervised the Plant Disease Information Office, a full-service diagnostic office that identifies plant health problems for stakeholders. Prior to retirement in 2015, she co-directed the Molecular Plant Diagnostics Laboratory with Dr. Robert Marra. This laboratory was created to develop rapid, accurate methods to detect new or re-emerging plant pathogens. Before retiring, Dr. Douglas maintained an active outreach program through authorship of fact sheets and presentations for growers, arborists, horticultural clubs, special interest groups, and students. She also cooperated with CT state regulatory personnel and USDA-APHIS-PPQ for detection and diagnosis of select agents and plant pathogens of national regulatory concern and directed the CT seed testing program, as the official seed testing laboratory for Connecticut.

Previous research focused on mitigation strategies for boxwood blight caused by the fungus Calonectria pseudonaviculata. This was a new emerging, destructive disease of boxwood that was first identified in October 2011 in North America (CT and NC). Since its discovery, it has resulted in losses estimated at $5 million in CT alone. Other research interests focused on understanding the physiological and genetic bases of host-pathogen interactions. These included investigating the relationship between vascular alterations and disease symptom development in Verticillium wilt of chrysanthemum and the physiological and physical basis of adult plant resistance of oats to Erysiphe graminis f. sp. avenae. Upon joining the Station, her research project focused on understanding the biology and epidemiology of diseases associated with phytoplasmas, primarily X-disease of stone fruits.
Selected publications available from author, Sharon.Douglas@ct.gov, or on this website: