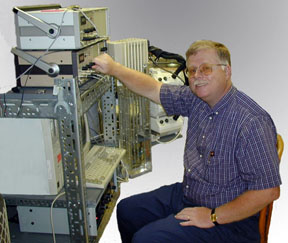 Training in biochemistry and physiology with experience relating to both the light and dark reactions of photosynthesis.  Extensive experience with measurements of gas exchange and light utilization and the biophysical parameters of electron transport in photosynthetic systems.

Structure-function relationships of the psbS protein and its role in nonphotochemical quenching.  Application of optical probes such as chlorophyll fluorescence and 820-nm absorbance changes to regulation of photosynthetic electron transport in leaves.  Glycolate metabolism in C3 and C4 leaves.

The American Association for the Advancement of Science

Dr. , University of Tartu, Tartu, Estonia.  Application of gas exchange and optical methodology to analysis of quantum utilization in photosystems I and II in C3 and C4 plants.

Peterson RB, Oja V, Eichelmann H, Bichele I, Laisk A (2014)  Fluorescence Fo of photosystems II and I in developing C3 and C4 leaves and implications on excitation balance. Submitted to Photosynthesis Research

Peterson RB (2005) PsbS genotype in relation to coordinated function of PS II and PS I in Arabidopsis leaves.  Photosynthesis Research 85, 205-219

Oja V, Eichelmann H, Peterson RB, Rasulov B, Laisk A (2003) Deciphering the 820 nm signal: redox state of the donor side and quantum yield of photosystem I in leaves.  Photosynthesis Research 78, 1-15

Peterson RB (1994) Regulation of electron transport in photosystems I and II in C3, C3-C4, and C4 species of Panicum in response to changing irradiance and O2 levels.  Plant Physiology 105, 349-356

Photosynthesis is the portal through which the energy of sunlight enters the biosphere.  The machinery of the photosynthetic system of higher plants and algae is compartmentalized in organelles called chloroplasts.  The overall process is described by:

where [CH2O] represents sugar.  Photosynthesis is divided into sets of “light” and “dark” reactions.  The light reactions are comprised of a series of steps that extract electrons from H2O and ultimately reduce NADP+ to NADPH.  These processes employ chlorophylls, carotenoids, quinones, and metalloproteins located in stacked membranes called thylakoids.  Each electron is sequentially given an energy “boost” from a photon channeled to a reaction center in photosystem II and again in photosystem I (Fig. 1).   Electron flow is accompanied by transport of H+ across the membrane.  Energy stored in the H+ gradient is used to make ATP, which like NADPH, is necessary for the enzyme-catalyzed reduction of CO2 to carbohydrate.  Light-generated NADPH and ATP are consumed by these “dark” reactions located in the soluble matrix of the chloroplast called the stroma. 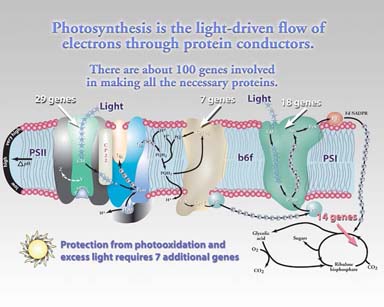 Figure 1.  Organization of the oxygenic photosynthetic electron transport system.  Four protein complexes participate in the production of NADPH and ATP:  photosystem II, photosystem I, the cytochrome b6f complex, and ATP synthase (latter not shown).  Light-generated substrates are used in a series of enzymatic reactions resulting in formation of carbohydrate.

Can we increase the growth and yield of crop species by increasing photosynthesis?

Figure 2 illustrates how excess light energy is dissipated as harmless heat in chloroplasts.  In dim light a fraction of the light energy is dissipated by deactivation of excited states of chlorophyll by fluorescence (re-emission of absorbed energy as red light).  In high light the xanthophyll molecule violaxanthin is enzymatically de-epoxidized to form zeaxanthin which apparently accepts energy from excited chlorophyll and decays to its ground state with release of heat.  Hence, the reversible interconversion of violaxanthin and zeaxanthin constitutes a switching mechanism affecting the availability of light energy for photochemistry in photosystem II. 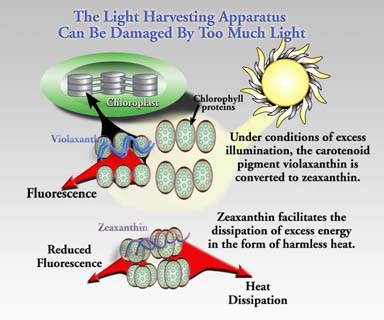 Figure 2.  The interconversion of the xanthophylls violaxanthin and zeaxanthin in the thylakoid membrane affects the density of excited states of chlorophyll.  These changes are readily monitored by changes in intensity of chlorophyll fluorescence emission.

Is the mechanism of thermal dissipation of light energy understood?

No.  Nevertheless, we do know that at least one other factor is required besides zeaxanthin.  Considerable evidence has shown that a protein in photosystem II is also required (psbS protein, also known as “S” protein or CP22).  The psbS protein is the product of the psbS gene located in the cell nucleus (Fig. 3).  Mutational loss of psbS or alteration of its structure results in loss of thermal deactivation capacity.  This can increase susceptibility to irreversible damage to photosystem II in bright light.  Hence, reversible thermal dissipation is considered photoprotective. 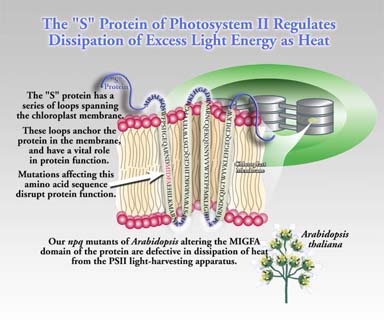 Figure 3.  The S protein is found in all higher plant systems and is essential for photoprotective thermal dissipation.  Mutation of selected domains in the protein will help define structure-function relationships fundamental to the mechanism of dissipation.

We have adopted a structure-function approach to understand psbS function better.  We used site-directed mutagenesis to replace non-adjacent ion-bonding residues of psbS to assess the role of tertiary structure in channeling absorbed excitation to quenching sites (see Schultes and Peterson 2007 in reference list above).  Another approach is to exploit natural variation in psbS structure across species.  Using sequence information for 62 psbS proteins in 44 species, we identified domains that are highly variable in amino acid composition.  Since we can assume that these diverse psbS proteins are capable of causing quenching in their native species, the variable domains could include changes that were adaptive during the process of speciation.  Unfortunately, testing psbS structural variants for expression and function is discouragingly laborious.  Nevertheless, we have developed a shortcut.  We have used virus-induced gene silencing to create a psbS deletion phenocopy in Nicotiana benthamiana.  This can be followed by transient expression of a psbS ortholog (psbS from another species) using Agrobacterium-mediated gene transfer (Peterson et al. 2013).  The N. benthamiana system promises to provide a fast means of screening psbS orthologs.  Select orthologous psbS genes can be stably introduced into the psbS deletion line of Arabidopsis thaliana (npq4-1) by transformation preceding more detailed photophysiological characterization.  Finally, psbS may not be the only protein regulating nonphotochemical quenching.  Recent evidence has revealed a role for the photosystem II antenna protein LHCB7 in shifting the light response of photoprotective quenching (Peterson and Schultes 2014).

What tools are available for assessment of photosynthetic efficiency?

Figure 4 shows how multiple aspects of leaf function can be monitored in the laboratory.  A portion of a test leaf is enclosed in sealed chamber.  Gas flows through the chamber at a known rate.  The change in concentration of CO2 or O2 downstream from the leaf chamber provides a direct measure of the rate of photosynthesis.  Likewise, the intensity of fluorescence emission is measured by means of special optical fibers.  This optical apparatus also permits measurement of changes in leaf absorbance at 820 nanometers.  This provides information on how light is utilized in photosystem I.  This system allows control of gas phase O2 and CO2 concentrations, light intensity, humidity, and leaf temperature.  Instrumental signals are recorded digitally to facilitate processing of results.  This methodology has been applied to understanding how production of NADPH and ATP is balanced to utilization of these substrates by the assimilatory processes of photosynthesis (Laisk et al. 2010, Eichelmann et al. 2011).

The enigma of bundle sheath cell photosystem II in maize. 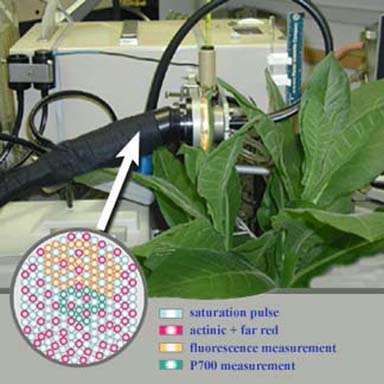 Figure 4.  Instrumentation for measurement of photosynthetic efficiency in the laboratory with a tobacco plant.  The inset shows the fiberoptic array that terminates near the leaf surface and delivers the combination of light beams necessary to drive photosynthesis and probe the state of the light-harvesting apparatus.

Typically, models of photosynthesis in plants using the C4 dicarboxylic acid pathway of CO2 fixation (such as Zea mays) discount the significance of photosystem II in the bundle sheath cells (Zelitch et al. 2009, Wang et al. 2011, Peterson et al. 2014).  Indeed, energetic considerations suggest an incompatibility between the presence of photosystem II and the ability to concentrate CO2 to levels well above ambient.  The latter is key to the O2 resistance and superior performance of C4 photosynthesis.  Nevertheless, recent proteomic evidence indicates that most photosystem II proteins are present at only slightly depressed levels in bundle sheath cells compared to neighboring mesophyll cells which are acknowledged to contain abundant photosystem II (Fig. 5).  This riddle was addressed by examining F0-level fluorescence in intact sunflower (C3) and maize (C4) leaves (Peterson et al. 2014). Values of F0I/(F0I + F0II) showed that in sunflower excitation was partitioned between PSII and PSI in a ratio of 2:1, but the same ratio was 1:1 in the C4 plant.  The latter is consistent with a PSII:PSI ratio of 2:1 in maize mesophyll cells and PSI only in BS cells (2:1:1 distribution).  We suggest, moreover, that redox mediation of chlorophyll synthesis, rather than protein accumulation, regulates photosystem assembly to ensure optimum excitation balance between functional PSII and PSI.  Indeed, the apparent necessity for two chlorophylls (a and b) may reside in their targeted functions in influencing accumulation of PSI and PSII, respectively, as opposed to their spectral differences. 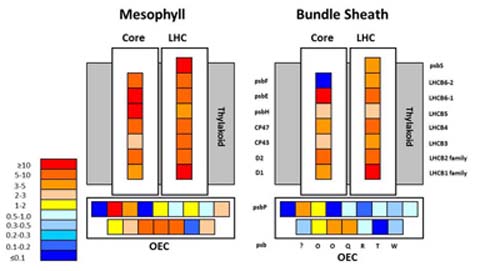 Figure 5.  Abundances of photosystem II proteins in the core, light-harvesting complex (LHC), and oxygen-evolving complex (OEC) for the mesophyll cell and bundle sheath cell compartments of the top 4-cm section of leaf 3 from 12- to 14-day-old maize seedlings.  Protein levels are presented as ratios to the level of psaA in each compartment.  Data are from supplemental Table 3 of Friso et al. [Plant Physiology 152: 1219-1250 (2010)].