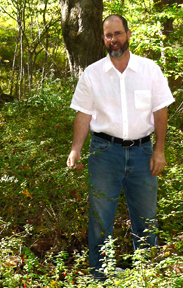 Department of Environmental Science and Forestry

Dr. Ward has expertise in identification and life histories of native trees and shrubs, forest management, invasive shrub control, plantation establishment, and forest nursery operation. He is knowledgeable about the natural history of Connecticut, landscape maintenance, and methods of reducing deer browse damage.

Research conducted during M.S. program focused how regeneration was influenced by alternative management techniques. During his Ph.D. program, Dr. Ward examined the community structure of an old-growth upland oak forest. Earlier research at the station included evaluation of browse protection and weed control in forest plantations, an examination of fuelwood thinning on regeneration and volume growth of residual trees, and the influence of urban development on inland wetland communities.

“Stormwise” (with University of Connecticut, Audubon Connecticut, Northeast Utilities, and others) – Eight study areas will be established in 2013-2014 to examine alternative methods of creating storm resistant forests along utility corridors and highways by combining silvicultural and arboricultural practices.

Foresters for the Birds - CT (with Audubon Connecticut, CT-DEEP Wildlife) – Will develop and promote songbird habitat assessment protocols and silvicultural guidelines for southern New England based on an earlier model created by Audubon Vermont for northern hardwood and conifer forests.

Alternative methods of Japanese barberry control (with University of Connecticut, The Nature Conservancy, Regional Water Authority; Aquarion Water Company, CT-DEEP Forestry) – This study was begun in 2006 to examine the cost and effectiveness of treatment combinations to control Japanese barberry and other invasive species. The study is also examining the interaction of invasive and deer browse control on forest regeneration and herbaceous communities. A total of fifty-six treatment/timing combinations have been examined on twenty-eight study areas.

Natural changes in unmanaged hardwood forests (with CT-DEEP Forestry; Great Mountain Forest; and the White Memorial Forest) – This study was begun in 1926 and has monitored the influence of disturbance and defoliation on natural succession in eight unmanaged Connecticut forests by monitoring the growth and survival of over 46,000 trees. Plots have been surveyed at 10-year intervals and will be re-measured in 2017.