Found in Connecticut: The smaller Japanese cedar longhorn beetle, Callidiellum rufipenne, was found in Milford, Connecticut on Sept. 22, 1998 in a live arborvitae branch, Thuja occidentalis 'Emerald Green'. This beetle is native to Japan, Korea, Taiwan and eastern China. It usually attacks dead, weakened or freshly cut trees. This is the first time it has infested live trees in the United States. The beetle may pose a threat to the nursery industry in Connecticut and to native and cultivated cedars, junipers and arborvitae.

Identification: Adult beetles vary from 1/4 to 3/4 inch long. The males are iridescent deep blue to black with brownish-red to red patches on the upper corners of the wing covers and have a reddish-orange abdomen. The antennae of the male are slightly longer than his body. The female has reddish brown wing covers, and a reddish-orange abdomen. The antennae are about three-fourths the length of her body.

Life History: This beetle has a one-year life cycle in Japan. Adults emerge in the spring and mate. Females lay eggs in bark crevices. After hatching, larvae enter the bark, and by making serpentine galleries, feed on the phloem and cambium. These galleries are filled with coarse sawdust and fecal material. Full grown larvae enter the sapwood in the late summer, and make oval cells in which they pupate. The adults that emerge remain in the wood until spring.

Signs of damage: Larvae cause damage by tunneling under the bark. The tree often forms calluses along the edge of the serpentine galleries. Cracked or splitting bark in late summer may be a sign of infestation. Occasionally, an infested tree may not show bark damage. 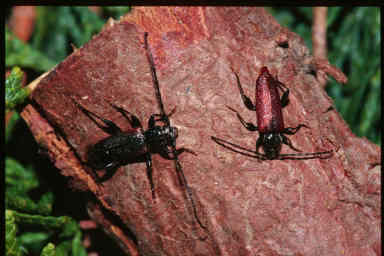