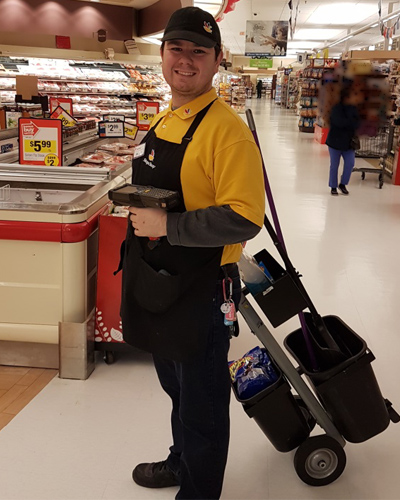 Over the past year Herbie has got a new job, new apartment, new life, and new responsibilities. Wow what changes!

Herbie decided at the age of 38 it was about time to have his own apartment.  He’d been living with a roommate and working at McDonalds for the past 10 years. To accomplish his goal he knew he needed to have a better paying job with more hours and better benefits.  It was really important to him to start saving money for the things he wanted to do.  He liked working at McDonalds but he began applying to other jobs including the Stop and Shop in Groton.  With his experience, he was hired immediately at Stop and Shop.

When asked why he made the switch, he didn’t hesitate: “30 hours a week, more vacation, and in a few months I’ll be eligible for their 401k plan”, which he plans on taking full advantage of.

Herbie is happy how The Arc New London County’s Employment Transition Center team has supported him – job coach and life skills instructor.  His job coach checks in with him twice a week but these days it’s just mainly for support; Herbie deals directly with his supervisor and absolutely loves his work as a porter.  He’s in charge of cleaning the aisles in the store and using the cardboard compactor to prepare all the boxes for recycling. You know he is loving his job, when you see him in the store he’s usually smiling.

Herbie set goals for himself and now he has his own apartment and a job that supports the life he wants to live!