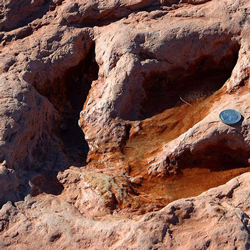 The Connecticut Valley is the world's foremost dinosaur track locality. Many different types of fossil track impressions have been found in the Valley's sandstone of the early Jurassic period (200 million years ago). Eubrontes, a large three toed track, was designated the State Fossil in 1991. Although no skeletal remains of the specific track making dinosaur have been found, the shape, size, and stride of the Eubrontes indicate that the animal was closely related to the Western genus Dilophosarus. Two thousand Eubrontes tracks were discovered on a single layer of rock in Rocky Hill in 1966 and subsequently Dinosaur State Park was created for their preservation and interpretation. This Registered Natural Landmark site receives visitors from throughout the world. Reproduced from the Connecticut State Register & Manual with permission of the Secretary of the State.